Blog Tour: Waiting for You 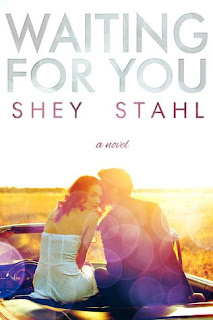 Waiting for You by Shey Stahl


Bailey Gray is tired of her perfectly planned life. Everything about her life has been organized and lived out to the expectations set of her parents. She is the class valedictorian, has perfect grades, the perfect friends, a perfect boyfriend, basically perfect life...or so everyone thought. That's when she realizes the path planned isn't always the path chosen.
On graduation day she makes a decision. One that changes everything she thought she knew about her intended future.
On a whim, she runs away with the town rebel, Dylan Wade, in search of the unknown.
Dylan Wade isn't looking to run away from anything.
He knows what he wants as he's been waiting on it for years.
On a journey to find the unknown, they discover a friendship they once knew along the open highway and have not a care in the world. Between the yellow and white lines of the heated summer asphalt, a spark draws them together as Dylan's past and Bailey future try to ripe them apart.
Could it be that Dylan and his GTO are exactly what her perfectly planned life needs?


I was excited for this book.... I was also nervous for this book because sometimes when an Author puts out this amazing series that you can't seem to get enough of they don't always hit the nail on the head with the next book... Well, I'll be the first to say that Shey did one hell of an amazing job with her Racing on the Edge Series and now Waiting for You!  she has more than proved she is a versatile writer who will continue to give us these books we can't get enough of!

So normally I give y'all this detailed description of my thoughts throughout the book but I'm not going to with this one... I AM recommending that you read it and that you figure out all the twists and turns on your own fully knowing that I adore these characters!  So go get Waiting for You if you haven't yet and if you have... send me a message and tell me what you thought about it!

Check out this awesome Excerpt and don't forget to enter the rafflecopter below for your chance to win a signed copy of Waiting for You!


I reached for my wallet inside my bag to see how much cash I had, knowing damn well my credit cards wouldn’t work now. I counted to myself as Dylan carefully watched what I was doing.
“I have just over nine hundred dollars. How far do you think we can get with that?”
He laughed and shook his head. “You’re not funding this adventure, I am.” Although laughing, his tone was set.
“I refuse to let you pay for this entire trip.”
His eyebrows flickered up and I could tell then he was deciding whether to be dirty or not. Not wins out. “There are always those sexual favors, so…”
I punched his shoulder for his lewd suggestions and handed him the money. “I insist on paying for my half of the trip.”
Pushing the money back at me, he shook his head. “I have more than enough money. When I turned eighteen my trust fund kicked in.”
“I’m not taking your trust fund money. That’s yours for college or whatever.”
It wasn’t a secret around town that Dylan and his brother had a hefty trust fund from when his mother died. Yet I refused to let him use that money on this adventure.
“I’m not going to college.” He smirked as if the possibility of him going to college was ridiculous. “Looks like we’re back to those sexual favors.” he suggested and leaned back on the bed and placed his hands behind his head. To make his point more clear, he winked and gestured south lifting his hips slightly.
What a pervert.

It was then that I was no more concerned about being murdered. Deep down he was too goofy to commit a crime as grave as a murder. At least that’s what I was telling myself.
Lying beside him, he looked at me and I confessed about my temper tantrum outside. “We have to use your phone from now on.”
“Where’s yours?”
“Under an Escalade outside,”
“Nice.” He propped himself up on his elbows. His feet dangled off the edge of the bed. “Are you hungry?”
“Actually yes, I’m starving.”
Removing himself from the bed, he pulled on a clean t-shirt from his bag on the floor and then put his flannel back on over the top of it. I noticed all his shirts were neatly settled in his bag where my bag looked as if hurricane Katrina had packed it.
“Get up. I’m taking you to dinner.” He told me walking around the bed and standing near the door. “I suggest you change out of that ridiculous gown though. I’m not going to dinner with the valedictorian.”
“I thought I looked hot in it.” I suggested twirling around trying to remember my ballet moves from when I was younger.
Nice flirting.
Dylan didn’t say anything for a moment so I looked back at him wondering if he even noticed my moves and he smirked keeping his eyes low.
“I agree,” he mumbled softly and turned to the door.
I didn’t wait for him to leave the room before I stripped my gown off. Usually I wouldn’t have done something that bold but I did it to tease him for the sexual favors comments. I stripped down to my bra and underwear. When I snuck a glance in his direction, I noticed he was still standing by the door putting his shoes on.
Clearly, he hadn’t noticed yet so I stalled for a second pretending to rummage through my hurricane mess and then pulled some jean shorts and a t-shirt out of my bag. When I turned around before I put my shirt on, I noticed he was now looking at me but said nothing.
I chuckled walking over to him. “What? You can make suggestions that I perform sexual favors on you but I can’t get undressed in front of you?” I asked, winking at him.
“No, by all means undress,” he said offering his own wink. “It’ll just make those sexual favors easier.”