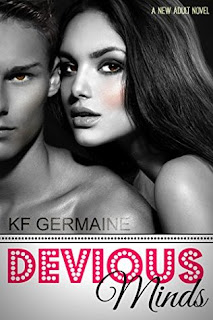 When Sydney Porter transfers to Northern University, she’s ready to put her past behind her. Landing a job on campus as an irreverent radio personality, she uses the anonymity to air all the campus dirty laundry—earning the infamous Sunday Lane more than a few enemies. But her true passion is spinning records, even if Drunk Earl is her biggest fan.

Sydney’s junior year kicks off with the promise to be amazing. Or at least it does until Gray Peters, hotshot quarterback, unexpectedly reenters the scene. His presence threatens to destroy everything she has going, as well as resurrecting a night Sydney never wants to remember or repeat. She’d run away like a coward, but this time she's determined to stay and fight.

A twisted battle of wit and trickery ensues, with one common goal—vengeance. Sydney and Gray set out to make each other miserable. But misery loves company, and soon, walls are destroyed and truths are revealed that could change their future forever.


That moment when a friend recommends a book and after you've finished reading you think... "I could kiss her right now because that book was fantastic!"

That's how I feel right now... about this book.   A friend of mine recommended Devious Minds by K.F. Germaine a few weeks ago.  I was anxious to dive in because this friend doesn't recommend books that often but says "I'm only 25% in and there are some hilarious parts."  Then goes on to say the banter between the characters is so well done instead of trying to hard.... Well, that's an automatic one-click or in this case a Kindle Unlimited download.

I don't even know what I can actually say without giving anything away... well I can say that the first 40% I was seriously dying... I couldn't stop laughing. It was exactly what my friend had said it would be... Very well done without being forced.

There's always something intriguing about enemies turned lovers... and this was pulled off quite perfectly.  These characters weren't so mean that redemption was impossible and while a few things were a little far fetched it was still believable.  But what made it so perfect was when they realized their revenge wasn't fueled from hate, but from hurt because their feelings for each other ran a lot deeper than either of them could have imagined.  These two still had some obstacles to overcome before finding their HEA.. it wasn't easy and there were a few cheesy moments... but in the end it was pretty perfect, at least in my opinion.


Needless to say... this book was exactly what I needed.  Everything about it was refreshing and when I say refreshing I should clarify to mean... the character development, the story line, the clever ways these two characters found to get their revenge, and the writing style in general.  It's no secret that I'm pretty picky about the books I recommend or even put up on my blog... hell, it's been almost a year since I've felt that driving itch to blog about anything.  But this book.... it's definitely one to check out.  Especially if you love spunky heroines who are not afraid to be themselves and an adorable hero who is a just a tad full of himself but has that protective instinct.... Then Devious Minds is for you!