Title: Cult of Beauty: The Secret Life of a Supermodel 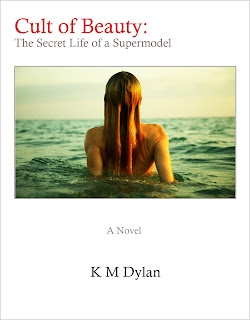 Supermodel Katie Wolfer takes a call from her stepfather as she steps off the Dior runway in Paris: her mother has died. As she struggles to move forward as an orphan, two men loom large for Katie—Gavin Poole, a hot, emerging fashion designer with an inability to commit, and her charismatic, wealthy French stepfather, Daniel de Goncourt. Katie becomes entangled with both of them, exploring her darkest sexual desires amidst a lavish, decadent lifestyle.

I have to say that when I read the book description for Cult of Beauty I was immediately intrigued!  A supermodel, a love triangle, one of those love interests is "forbidden fruit"?  Umm.. hello!  Talk about drama!  So of course when the opportunity to read Cult of Beauty presented itself I was like "Sign Me UP!"  Well.... while I will say that Cult of Beauty is a very good read I will also say that it is not my typical kind of read!  Y'all know how much I love my romance and while there is some romance in this book... there really isn't.  It is a very realistic story of a young woman that desperately needs direction - it is not in any way romanticized and KM Dylan did one heck of a job creating very realistic situations that made me really like and feel for Katie as a character when normally she's the type of heroine that I do not like.

I have to warn y'all that this book is HOT and when I say that I mean it was so hot it made me blush - Yes ME!  My husband was even surprised... he looked over at me during this one scene and said "Are you reading one of your good books?"  Me: "Umm..."  Hubby:  "I'll take that as a yes because you're actually blushing."  After a minute of starring at me he did the whole raised eyebrow thing, shook his head, and mumbled "Maybe I should read it since I have seen you blush like that since we were in our early 20's"  So there you go... the smut in this book is so hot that it made me blush and even peeked my husbands curiosity!

While the story mainly focused on sex... and there was a TON of it... there was also more to it and I hope the more turns into even more in the next book, which I am personally ready for!  For those of you looking for a HOT read - Check it out!!!!  I can tell you this will be one that will appear on my reread list!

K M Dylan was born in Paris in 1982, spent many formative years in France and lives now in New York in the East Village. She is a former model with a French mother and American father. Her novel is a fictionalized memoir, and is only very loosely based on her actual loves and adventures.