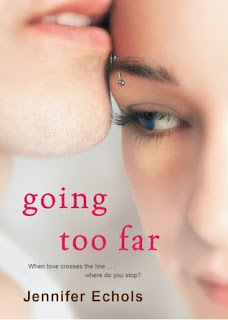 Book description....
HOW FAR WOULD YOU GO?
All Meg has ever wanted is to get away. Away from high school. Away from her backwater town. Away from her parents who seem determined to keep her imprisoned in their dead-end lives. But one crazy evening involving a dare and forbidden railroad tracks, she goes way too far...and almost doesn't make it back.
John made a choice to stay. To enforce the rules. To serve and protect. He has nothing but contempt for what he sees as childish rebellion, and he wants to teach Meg a lesson she won't soon forget. But Meg pushes him to the limit by questioning everything he learned at the police academy. And when he pushes back, demanding to know why she won't be tied down, they will drive each other to the edge -- and over....

After seeing a post on Facebook from Maryse from Maryse's book blog I figured... hmm, I think I need to read this book.  Based on what she had said I felt like I need to adjust my TBR list and ended up starting Going Too Far that day... So thank Maryse for the wonderful recommendation!

Meg, in all honesty was quite a little delight.  I loved her carefree attitude, blue hair, and extremely smart mouth.  Granted she did not make the best decisions and there were times where I was starting to get concerned over what this poor girl had been through to make her act the way she did.. but I enjoyed her character.  In her eyes she was living life to it's fullest... or at least living her life the way she wanted by having the kind of fun she wanted.  That is... until she is caught trespassing and ends up arrested.

John... sigh... I absolutely loved John.  Watching his inner struggle with his feelings towards Meg was something else entirely.  Granted we never got his POV but his actions definitely spoke louder than any words.  John is the officer that arrested Meg and his proposal to prevent kids from trespassing on the old railroad bridge is approved by the DA... so for one week Meg and John will be spending time together.

I've seen where other people have mentioned the "forbidden" aspect of this book... and while I completely agree with that, I have to say once you learn a few things it still has that "forbidden" feel because of John's position of authority but at the same time it doesn't.  The two of them being together ends up making complete sense.  They seem to bring out the very best and sometimes the worse in each other, and the chemistry between the two is through the roof.

I found myself completely engrossed by this book... I mean like couldn't put it down, let my kids raid the pantry, and finished in about 3 hours engrossed.  It may have taken me a while to get to the point where I could say that I "loved" this book... but once I got there I felt it.  These two characters, their pasts, and what they represent to each other when it comes to the future captured my heart to the point where I would LOVE to see more of them.

by Jennifer Echols is an excellent, easy, consuming little read that would make a perfect little summer read!  Jennifer's writing style is definitely a favorite of mine... her characters are well built and her stories have an easy flow that keeps you more than interested.  She is by far on of my favorite YA authors!