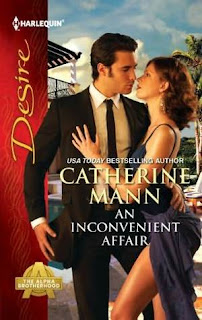 Book description...
Hillary Wright has always been a magnet for Mr. Wrong. Her latest left her in trouble with the law, and to clear her name, she's agreed to an undercover sting—as the "date" for infamous Troy Donavan. The notorious hacker is now a government good guy…and a sexy billionaire playboy. Troy has a reputation as the sort of man she's vowed to avoid, and his secretiveness adds fuel to Hillary's distrust. But with his kisses like molten sin, her fierce resistance is melting. And being sensible in the face of such overpowering desire is just not an option.

I received an ARC of An Inconvenient Affair for an honest review... well actually when Catherine mentioned having ARC's of two of her books available and to email her, I jumped right on that because I absolutely LOVE Catherine Mann's books.  Not to mention I saw the series title of this book and thought.... "Yes Please!"  Anyway, I've never confessed this... except to maybe one or two people but Harlequin Desire or Harlequin Heat books are like my dirty little secrets... I love them... they are always an easy read with well built up characters that have this instant chemistry you can almost feel through the book.  It's been a while since I've read one because I only ever looked for them while at Walmart or Target... on one of my many trips to the store to "pick something up" without the kids.  Unfortunately, since I got E.Luke it's been a while since I've read an actual paperback copy of a book.... and you know what?  I forgot how much I actually missed it... the smell alone made me feel that sigh of peace like I was spending time with an old friend.  Now, I also have to admit reading books on E.Luke is so much easier because I can multi-task... sad but true... I do actually cook dinner and read at the same time.  So, Thank you Catherine for not only allowing me the opportunity to review your books early but for giving me the reminder of how good a paperback book feels in my hands!

So Hillary has found herself in a tight spot... of course it's a man who got her in that tight spot but in order to prove her innocence she has to cooperate with the authorities to ID the bad guy.  Everything seems to be going off without a hitch until the extremely sexy man she met on the plane is now at the gala and seems to be occupying all of her thoughts.

Troy... sigh... I just loved him, he's such a charmer!  Anyway, he knows upfront what his "job" will entail but he doesn't suspect Hillary to be so...hot.  He pretty much knows immediately that he wants to spend more time with her and not just because he wants to keep her safe.  So he kind of does the unthinkable and ensures that she will be his date for the entire gala... which happens to be the entire weekend.

Sparks fly between these two... I mean seriously fly.  Hillary battles with herself on whether or not she should have an affair with him and Troy is trying to figure out a way to woo her.   And boy does he ever... but a playboy has insecurities too and those insecurities may just cost him the one girl he can't seem to get enough of.

by Catherine Mann is a hot, easy little read that has me craving more of The Alpha Brotherhood.  I was drawn in immediately and not ready for it to end.  I love the way Catherine writes... her books never leave anything to be desired except more of the amazing characters she creates.  I look forward to reading more of this series... as well as more of her work!