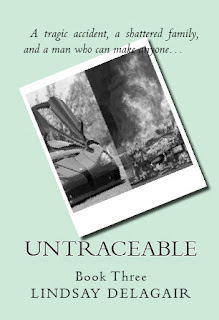 Book description...
The final installment in the Untouchable trilogy winds through a tangled web of shattered lives, the pursuit of power, and the unfailing strength of love.
Annalisa knew from the beginning that she was falling in love with a dangerous man. But, she also knew that underneath his cold and empty hitman exterior, beat the heart of the man who would love her forever. Against insurmountable odds, Micah and Annalisa have finally reached a place in their lives where he can make a promise to her. It is a promise he never thought would have been possible at one time: He will never take another human life.
But when tragedy strikes, and their happiness is destroyed, Micah must decide if he should keep his promise, or should he pursue those responsible. Especially when he realizes it involves the most feared man in the U.S. mafia, a man who can make anyone...Untraceable.

Okay so first things first... BIG Thank you to Lindsay for sending me an ARC of Untraceable... you're awesome girl and I honestly thank you for your kind words :)

** Spoiler alert -  If you have not read Untouchable or Unforgivable yet then reading this review will give away numerous spoilers to both! **


Untraceable pretty much leaves off where Unforgivable ended.  Micah and Leese have managed to work things out and have gone back home to Florida to  live as the family they were meant to be.  Leese has completely forgiven Micah for what happened in Colorado... I know I got a lot of email's from some of you fellow book lovers and I have to say that Yes, I do agree, she forgave him for something that should have been unforgivable... but I actually talked to Lindsay about that and she made a lot of sense when she said

when put that way it makes sense on why she forgave him.  Especially when you think about her POV and all she thought about when it came to what happened and then what happened as a result.  So they're back and home and trying to build a life for themselves and their baby.

Micah has some... we'll call them issues... to work through.  He's basically at a low point in his life, he's still trying to become the man he was meant to be and is trying to come to terms with how to seek salvation.  Leese is there helping him along the way.  When he finally gets to the point where he feels happy, content, and ready to completely forget about his past in order to move on into the happy future he deserves with his family.... when something happens... something HUGE... something I am so not telling you about.

So I've got to be careful from here on with my words because if I slip even once then I'm going to end up giving something away... and even though I actually prefer spoilers I'm going to be my usual mean self and keep them to myself because I had none when it came to this one... I mean I actually emailed Lindsay at one point because I had no one else to complain to.. and you want to know what she told me?

if she wasn't channeling one of my girls with that line then I don't know what, but I actually needed to hear that.  Yes it is her book and of course she wants me to keep reading but I have to say that I was honestly glad I did.  Here is why I needed to email her... I was mad, I mean absolutely ready to punch him in the face MAD at Micah.  He made me mad at one point because... well shoot, I can't say... but he made me mad, and then I thought okay so he really didn't get a choice so if I must I'll give him the benefit of the doubt.... and then he not only does it again but he adds a little something to it and seriously I wanted to scream at him.  I was so mad that I felt horrible for Leese and actually thought... "Why didn't she...." oops, sorry, I almost gave something away there!  Obviously I was pretty mad at him lol.  Then, he had an opportunity to do something that would have pleased me to no end, and actually saved him some trouble, but he didn't do it... I get why... after I read a little more of the book but that doesn't mean that I don't wish he would have taken the chance to take care of ... ummm... that... problem, while he had the chance.

There are a lot of surprises in this book... a lot of questions you may have had will be answered, and you actually get the chance to see that even though he was bad turned mostly good, Micah still has to face the world as a human being... he's got to take responsibility for something that maybe could have been avoided but maybe couldn't have in a way that a man shouldn't have to.. but he does it.  He owns up to it and takes the back lash like a true man.

** Attention Ryan lovers ** I have to say I wish I would have seen a little more Ryan in this book, I love him... I really do!  BUT there is something that happens in the epilogue with Ryan and when I read it I honestly put my arms in the air and squealed "YAYYY!!!" and then I read a little more and thought "Well so much for those hopeful thoughts" but I was still happy because it's ultimately what he wanted.... but I still couldn't help that "Yay" and then think "hmm, I wonder if...." Totally just finished that thought in my head

by Lindsay Delagair is a wonderful addition to the Untouchable Series.  I really enjoyed these books, I enjoy Lindsay's writing style and where she goes with stories.  She's not afraid to take chances and she creates characters that seem to balance each other out extremely well.  I look forward to the release of her next book.