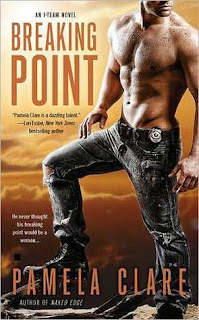 Book description...
While investigating border violence in Ciudad Juárez, Mexico, Denver journalist Natalie Benoit is caught in a bloody ambush and taken captive. Alone in the hands of ruthless killers, she will need every ounce of courage she possesses to survive.
Betrayed by another operative, Deputy U.S. Marshal Zach McBride has endured a week of torture and interrogation at the hands of a bloodthirsty Mexican drug cartel. Ready to give his life if he must, he remains unbroken - until he hears the cries of an American woman.
Although Natalie is only a voice in the darkness of their shared prison, her plight brings renewed strength to Zach's battered body. With her help, he overpowers their captors, and they flee through the desert toward the border, the attraction between them flaring hotter than the Sonoran sun.
But past loss and tragedy leave both of them reluctant to follow their hearts, even when the passion between them reaches its breaking point. Faced with feelings neither expected, they fight to stay ahead of the danger that hunts them as forces more powerful than they can imagine conspire to destroy them both…

Honestly?  I'm sitting here trying to figure out exactly where I want to start with this review... because in all reality I loved this book so much that I could turn around and read it all over again and probably love it even more.  THIS book... Breaking Point... is my ideal Military Romantic Suspense novel and without a doubt is one of the best I've read in a very long time, if not my favorite I've ever read... and I've read A LOT of them!

These characters have strength, determination, passion, and most of all... a growing love for each other that is so beautiful I would have loved to get lost in them even more.

As a reporter, Natalie seriously cracked me up with all her questions and her extreme curiosity... the woman most definitely found herself with the perfect career!  Normally, I'm a little turned off by that type of intense curiosity because there doesn't seem to be a line by the questions that are asked, but in Natalie's case, I admired the fact that she had no shame.  Maybe it's because she was so sweet, maybe it's because she was in the middle of having to fight for survival, or maybe it's just because there was something about her that I instantly connected with.  I adored her, I found myself constantly cheering her on, and most of all she didn't annoy me.... well maybe she did a few times just a little but no one can be that perfect ;-).  Then there was the voice that gave her strength to survive, the voice who helped keep her calm, who helped her continue to fight and go on when she was ready to give up... The voice who turned out to be an extremely amazing former Navy SEAL/current US Marshall... Zack.

Zack... so much I can say about it but so much I want to keep to myself.  He's one of those characters that you want to gush over, you want to claim him as your current book boyfriend, you continue to think about him even days after you've finished the book...  Zack pulled at my heart in so many ways, he was hot and obviously that is something all heroes are but yet he was more.  He was emotionally wounded to the point where it seriously broke my heart... I wanted to hug him and tell him that everything would be okay, that everything would work out, and to just follow his heart because he deserves the happiness that he can see right in front of his face.

Like I said before, I more than enjoyed this book, I was already recommending this book to a few friends before I had even gotten 50% into it... seriously... it's that good!  If you are a fan of Military Romance, I seriously can not recommend this book enough and I have to give credit and big thanks to my girl Nikki for recommending Pamela Clare to me!

There is one quote that I am desperate to share... this quote gave me goosebumps, because as y'all know my 21 year old nephew is in the U.S Army and I am so very proud of him and the choices he made to get there!  But this quote is just so powerful:

"I am an American, fighting in the forces that guard my country and our way of life.  I am prepared to give my life in their defense."

After reading that I had tears in my eyes thinking how thankful I am each and everyday to the men and women who serve and have served their country to keep us all safe and fight for our freedom!  This review is dedicated to those men and women for their bravery, their strength, their sacrifices, and most of all their determination!

Happy Reading!
Posted by Lori at 7:00 AM