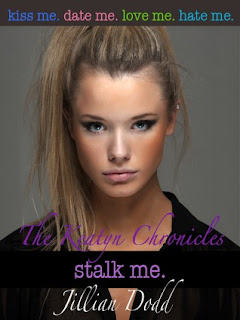 Stalk me. (The Keatyn Chronicles) by Jillian Dodd

Book description...
Gossip girl meets Hollywood in this new series by That Boy author, Jillian Dodd.
Keatyn has everything she ever dreamed of. Her life is following the script she wrote for the perfect high school experience. She’s popular, goes to the best parties, dates the hottest guy, and sits at the most coveted lunch table.
She’s just not sure she wants it anymore.
Because really, things aren’t all that perfect.
Her best friend is threatening to tell everyone her perfect relationship is a scam.
Her perfect boyfriend gets drunk at every party they go to.
It’s exhausting always trying to look and act perfect.
And deep down, she isn’t sure if she has any true friends.
To add to the drama, her movie star mom’s long-time fan has turned stalker.
An older man is flirting with her and telling her they should make a movie together.
And she’s crushing on an adorable surfer. Dating a guy like him would mean committing social suicide.
So she writes a new script. One where all the pieces of her life will come together in perfect harmony.
But little does she know, there’s someone who will do anything to make sure that doesn’t happen.

This book did things to me... Like addictive things that made me not want to put it down!  Therefore, I am officially blaming Mollie from Tough Critic Book Reviews for my sleepless night... literally... I did not sleep at all because I had to know what was going to happen next!  I'm not upset with Mollie... quite the opposite actually.  She is a total sweetheart!  Not only did she recommend this book to me, but when I ended up hospitalized for just under a week for stupid kidney stones she gifted it to me!  So big thanks and hugs and smoochies to Mollie for her generosity and thoughtfulness.  Here is where I'm going to tell you to make sure you read the entire review... because there might be something for you at the end.... could it be a giveaway?  Why, yes, I think it is!  Not only is the amazing Jillian Dodd going to offer an autographed book... BUT I'm also going to gift an ebook copy to someone as well!!!


I really enjoyed Keatyn...  All she wanted was a normal life... high-school, popularity, boyfriend, friends... but we don't always get what we ask for.  I was lucky when it came to high-school... I had and still have amazing friends, I had a smokin hot boyfriend who I'm now married to, and my social life drove my parents insane to the point where I was grounded just about every other weekend... but it's not that way for every teenager.  Kids, especially today, are downright vindictive... not that they weren't 12 years ago because they were, but they seem to be even worse today.  It's sad, I will admit that when I was younger I was a bit of a stuck up little witch but at the same time I still loved meeting new people.  I have always tried to be nice to everyone (not that I've always succeeded *hangs head in shame*) so, when I saw that's the person Keatyn really wanted to be I fell in love with her.

She may only be 16 but she's mature for her age.  She's experienced things in life that a lot of adults haven't, but she still has a lot of life lessons to learn.  I found myself routing for Keatyn... personality wise I felt like I was reading myself at 16... a girl who is struggling with choices.  Does she maintain her popularity and snub other teenagers because they're not popular or maybe they don't have the "look", or does she stand up for what she knows is right and just be herself... a sweet, down to earth girl who just wants a normal life, normal friends, normal boyfriend?

In all reality it is hard to be a teenager... yes I would LOVE to be 16 again where my only concerns were what I was doing Friday and Saturday night, what party we were going to go to, who was I going to let take me to prom, what was I going to wear, ect... but it's rough.  You're still trying to figure out who you're going to be in life and peer pressure is at an all time high... pressure to be popular, pressure to have "the" boyfriend, pressure to have this seasons clothing, lots and lots of pressure.  It's kind of sad really!

Keatyn learned that the choices we make don't always affect us in a positive way, or maybe they do but others don't see it that way.  She learned that there is always someone who wants what you have and will step in hopes of trying to take it from you as soon as you let your guard down.

The best part about this book was the boys.... Oh. My. God. The boys!  It was a bit of a hottie overload but I want more!  So many to chose from and I ended up changing my mind so many times that I lost track of who I was really pulling for in the end.  I am extremely anxious for Kiss Me.. the second book in the Keatyn Chronicles, which is due to be released in December!  I need to know who she's going to choose... will she get her chance to talk to a certain sweet boy and explain what happened?  Will the boy who makes her heart race when she sees him play with her emotions?  Will the boy she has been in love with for years redeem himself?

So many questions and the wait is going to be agonizing!


a Rafflecopter giveaway
Posted by Lori at 7:00 AM