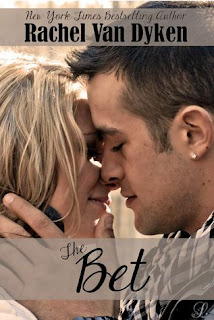 "I have a proposition for you..."
Kacey should have run the minute those words left Seattle millionaire Jake Titus's mouth. Instead, she made a deal with the devil in hopes of putting her past behind her once and for all.
Four days.
She could do four days!
But she wasn't counting on Jake’s older brother Travis being there to witness their farce of an engagement.
One thing is for certain.
One brother is right for her.
One wants a lifetime.
And one is in league with the devil.
She should have gotten Jake’s signature in blood.


You know those moments when you're reading a book and something happens and the heroine has to make a decision and you're at the point where you're almost yelling at your ereader saying "Don't do it"?  Well that was me with The Bet.... I could see that something was going to go downhill and I have to say I was pretty scared for our broken hearted heroine because I was afraid that she would fall into the trap...

Kacey has been friends with the Titus family for years.  Jake and Travis were her best friends growing up and she had a special relationship with their Grandmother... who let me tell you totally made this book with all her shenanigans.  More than once, while reading, did I ask where my Grandma was because that woman was something else!  But her friendship to Jake pushed her to make the decision that had disaster written all over it.

I'm just going to put it out there that Jake... is just an ass.  There is no sugar coating it... the man seriously needs to grow up and get over himself.

So... thank you baby Jesus for Travis!  That man had my emotions all over the place.  One minute I wanted to smack him and the next I wanted to kiss him.  He is exactly what Kacey needed in a man and the fact that these two not only faced struggle after struggle but had to get over some past hurts as well.. just proved how perfect they are for each other.

If you're looking for a cute little read with loads of humor from a Grandma who does not act her age then I would recommend The Bet... Personally I enjoyed The Bet so much that I turned around and one-clicked another one of Rachel's books.