The Gypsy Theif Review and Interview

The Gypsy Thief: The Talisman Trilogy 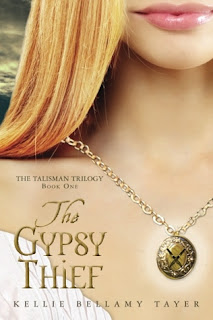 The Gypsy Thief is set in modern day Rhode Island and is the story of Laura Calder and her love for two boys: Andrew Easton, a descendant of King George the First, and Miguel Dos Santos, a mysterious gypsy who has royal ties of his own. More than 300 years previously, a dying Portuguese princess named Gabriela cast a gypsy curse on King George the First who issued a royal decree to counteract that curse. In the spring of 2012, the time has come for the decree to be fulfilled: Miguel Dos Santos must die by the hand of Tristan Easton, the eldest son of the Duke of Easton. But when a tragic accident befalls Tristan, it is up to his younger brother Andrew to carry out the decree, a situation complicated by the fact that Miguel once saved Andrew's life. Andrew's father, the Duke of Easton, aware of Miguel's act of bravery, decides to let him live, but not without cost. He forces Laura into an impossible situation in order to save Miguel and her family. She must make a life-changing, heart-breaking decision, even as she tries to understand the messages from the mysterious disk she wears as a talisman around her neck, a talisman she must protect from the duke, as it is now her only tie to Miguel. Ultimately, The Gypsy Thief is a story of family honor and the lengths we will go to protect the ones we love, a story to be continued in its sequel, The Dark Prince, and concluded in The Shadow King.


I will be the first to admit that I am not a fan of historical novels... nor am I any kind of History buff.  As a matter of fact when it comes to History, I'm lucky I remember the stuff I do because quite frankly it was one subject I struggled with in High School.  So even though The Gypsy Thief looked really good based on the book description I was a little nervous that there would be a lot of history references... but there really weren't any.  Sure there is this really awesome twist that dates back to King George the First and has trickled into the twenty first century but that's the extend of the history references... Just as the description says it really is all about family honor.

The characters are loveable and easy to connect with.  They're all fairly mature (some more than others) in their own way and they all have decisions that need to be made regardless of it's actually the right decision or not.  This was a great start to a series that I'm looking forward to reading more of... and I really can not wait to get my hands on The Dark Prince.  I'm dying to know what's going to happen next because let me tell you that ending.... sigh.

In all honesty The Gypsy Thief was a great YA read that kept me on my toes.

Thank You so much Kellie for stopping by to answer some questions about The Gypsy Thief. I’m looking forward to reading more about Laura, Andrew, and Miguel’s lives. Do you have approximate release dates for The Dark Prince and The Shadow King?

If everything stays on track, The Dark Prince should be out either late May or early June and The Shadow King should be out either late August or early September.
The Gypsy Thief has this interesting twist that dates back to King George the First… was there anything specific that inspired you to add a little history that dates back so far?
I loved the idea of telling the reader a short story about the past that would be play out in the modern day. As the three books come together, the reader will see that Laura is actually living a re-enactment of Princess Gabriela’s life and history is repeating itself.
Laura is such an easy going and loveable character, but she’s got some serious life altering decisions to make all because someone is holding the safety and security of her loved ones over her head. Will she get her chance to tell the Duke exactly what she thinks of him? Without the chance of him following through with any of his threats?
That’s a great question and tricky to answer! In The Dark Prince, Laura does try to tell the duke what she thinks of him, but it always backfires. Eventually he will get what’s coming to him, but the person who eventually brings down the evil duke is not Laura. It’s someone who will surprise you and make you stand up and cheer! But you have to wait for The Shadow King to see who finally triumphs over the evil Duke of Easton.
Despite the love-triangle… I personally think it’s pretty clear who Laura is meant to be with. Will she get a chance to be with the boy she’s in love with?
I believe in happy endings so, yes, Laura will be with the boy she’s in love with, but…and this is a huge ‘but’…the other boy will blow your mind in The Shadow King. Both boys are heroes in my eyes, but one boy rises to the occasion and becomes the true hero in ways no one could ever have predicted, myself included!
If The Gypsy Thief were to be made into a movie and you could pick your dream cast for Laura, Andrew, and Miguel… who would you pick?
Oh, I love this question!!! There is only actor who could ever be my Andrew Easton and that is Austin Butler (he’s the gorgeous blond boy on “The Carrie Diaries.”). Of course, I had Taylor Lautner in mind from the very beginning for Miguel, but I’m sure he would never be part of another film franchise so I would suggest Tyler Posey (he was the little boy in the Jennifer Lopez movie “Maid In Manhattan” but he’s all grown up now) or even Graham Phillips who plays Zach on “The Good Wife.” For Laura, I think AnnaSophia Robb (“The Carrie Diaries”) would be great or Ashley Benson of “Pretty Little Liars.” Even Elle Fanning or Chloe Grace Moretz would be great. I would love to see Colin Firth as the evil Duke of Easton and Christopher Egan as Tristan.
In the prologue, Miguel shows his brothers a ring that was found on the body of his ancestors true love… Does this ring have any physical connection to the talisman?
Yes, there is a connection which comes into play at the end of The Dark Prince. It also makes Laura feel deep emotions and physical sensations when she puts it on for the first time.
It’s made pretty clear that the Duke is just a jerk, but Miguel has told Laura numerous times to stay away from him. Even his own son (Tristan) seems to dislike him. Will we learn more about the Duke and why he’s willing to go to such extreme measures to get what he wants?
Oh, yes, you will. You will learn the duke’s deepest, darkest secret at the end of The Dark Prince and that secret is at the heart of The Shadow King. While Laura is re-living the life of Princess Gabriela, the Duke of Easton is re-living the life of King George the First!
This one is not related to The Gypsy Thief, but it’s one of my favorites to ask authors…. What is your absolute favorite book? The one you turn to when you need a pick me up? The one you could read over and over again and never get sick of?
Oh , I love this question! YES! My favorite book is “Perfect Chemistry” by Simone Elkeles. I’ve read it many times and I know I will read it many more times. It’s a YA romance and the boy in the book, Alex, is my favorite boy in a book of all time (not counting my own ‘boys’-ha!). As a matter of fact, I love the character of Alex Fuentes so much that I did something absolutely extraordinary: I conjured him up into reality (age appropriate, of course!) and I will be married to him by the time this interview posts on your blog! My Alex is named Oscar and he reminds me so much of Alex in the book that it’s crazy!!!! I even contacted Simone to tell her what her book means to me and how I somehow conjured up my own Alex (30 years older of course!). She sent me a sweet message! I still can’t believe how lucky I am to have found my own ‘boy in a book…’ Maybe I should say ‘man in a book!’
Big thanks to Kellie for not only answering my questions as best as she could without giving away spoilers!  Personally, after reading most of these answers I'm even more anxious to read The Dark Prince... I'm so anxious to see if Laura will end up with the boy that I think is made for her!
Happy Reading!