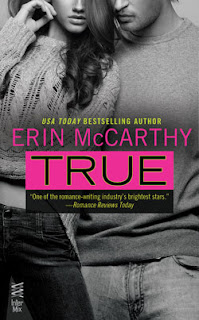 When Rory Macintosh’s roommates find out that their studious and shy friend has never been with a guy, they decide that, as an act of kindness they’ll help her lose her virginity by hiring confident, tattooed bad boy Tyler Mann to do the job…unbeknownst to Rory.

Tyler knows he’s not good enough for Rory. She’s smart, doctor smart, while he’s barely scraping by at his EMT program, hoping to pull his younger brothers out of the hell their druggy mother has left them in. But he can’t resist taking up her roommates on an opportunity to get to know her better. There’s something about her honesty that keeps him coming back when he knows he shouldn’t…

Torn between common sense and desire, the two find themselves caught up in a passionate relationship. But when Tyler’s broken family threatens to destroy his future, and hers, Rory will need to decide whether to cut her ties to his risky world or follow her heart, no matter what the cost…


So I have to say that Erin McCarthy... you're seriously my hero!  This woman has written about super hot race car drivers, vampires, numerous other series... and now this sweet yet intense New Adult Novel.. like I said - she is my new hero!

TRUE so far is holding pretty strong on my favorite reads of the year list so far... and a lot of it has to do with the sweet love that not only happens between Rory and Tyler but that also happens in Tyler's family.  You'll understand towards the end of the book when a certain tattoo is discussed!

I really don't want to give too much about this book away... even about the characters because learning who they are and then watching them both grow into the people they become was all a part of what drew me to this story.  But I will say this (mostly because it's mentioned in the book description) WHY would her 'friends' want to hire someone for her to lose her virginity?  What kind of friends would do something like that?  And why in the hell is Rory so quick to forgive and trust them?

TRUE is another definite recommendation for the year... especially if you like those sweet first love stories where the main characters are so different you'd never expect them to work out!