A Political Affair by Mary Whitney 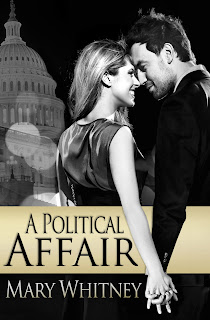 No one expected Stephen McEvoy to fill his father’s U.S. Senate seat at such a young age, least of all him. The scion of a revered political dynasty, he’s appointed to the Senate after his father’s untimely death. Now he’s in a tough election battle against an archconservative. When clever Anne Norwood interns in his office, he dismisses her as another pretty face—until her independent streak catches his attention. She soon finds him far more interesting than his Senator McEvoy persona. They’re both too smart to fall for one another, yet they do. Their relationship becomes a political gamble in a tight election, and all the while, his opposition lies in wait for him to make a mistake. As Stephen’s past catches up with him, he and Anne must fight for their future. Their lives mean more than politics, and campaigns—like love—are either won or lost.

Even before she graduated from law school, Mary knew she wasn’t cut out to be a real lawyer. Drawn to politics, she’s spent her career as an organizer, lobbyist, and nonprofit executive. Nothing piques her interest more than a good political scandal or romance, and when she stumbled upon writing, she put the two together. A born Midwesterner, naturalized Texan, and transient resident of Washington, D.C., Mary now lives in Northern California with her two daughters and real lawyer husband.
Website / Twitter / Facebook