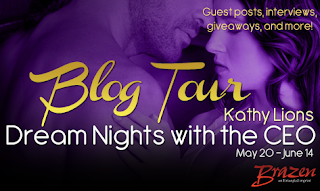 Dream Nights with the CEO 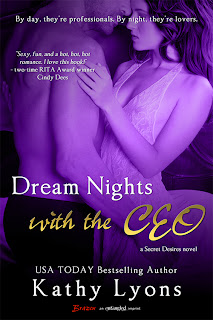 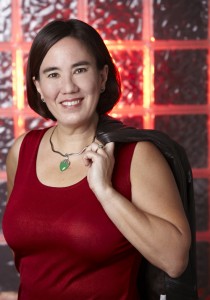 Kathy Lyons Bio (aka Jade Lee):
A USA Today Bestseller, JADE LEE has been scripting love stories since she first picked up a set of
paper dolls. Ball gowns and rakish lords caught her attention early (thank you Georgette Heyer), and her fascination with the Regency began. And as a Taurus, she lives to pit a headstrong woman against a tortured hero just to watch them butt heads on the way to true love. Flesh wounds are rare, but the healing and laughter are real.

Now an author of more than 30 romance novels, she finally gets to set these couples in the best girl-heaven of all: a Bridal Salon! This way she gets to live out all her wedding fantasies, one by one. (Let’s be honest, what girl has only one idea for her dream wedding?)
And don’t forget Jade’s other name, KATHY LYONS. That’s Jade’s lighter, contemporary side she’s writing for Entangled Publishing and what Dream Nights is all about!  For more on Kathy visit her on her website, Facebook, or Twitter.


Wyatt was standing in a private graveyard on a stormy moonlit night. His head was bowed, his cape flapped about him, and in his hand he held a blood-red rose. The other hand crumpled a pristine sheet of linen paper.
He lifted his head and looked around. How could it be both stormy and moonlit? Mood lighting, he realized. And mood clothing, he added, absently noting he wasn’t wearing a shirt. Then he went back to the flow of his dream.
He looked at his hands. He lifted the red rose, seeing its sculpted perfection. He was about to toss it on one of the graves, but his attention turned to the sheet of white linen. Lifting it up, he read it, even though a few stray raindrops blurred the words.

Megan's list. He dropped his hand, feeling a sense of desolation fill him. Was he standing in front of her grave? Was that why—
"Aren't you cold?"
He looked up to see her walking through a gate that he would swear hadn't been there a moment ago. She was standing in a rainbow tie-dyed tank and light blue cut-offs, her smile and her whole demeanor at odds with the gray, barren landscape. She was so beautiful it made his heart lurch in his chest.
"I might ask you the same thing."
She glanced down at herself and grimaced. "Oh God. My tie-dyed phase."
"I like it."
"I like seeing you without your shirt on, too, but…" She gestured at the stormy landscape. "Isn't this a little impractical?"
He didn't answer. Instead, his eyes went down to the gravestones. He couldn't read the names on the markers, and he really wanted to.
"Who are they?" she asked as she came to his side.
He opened his mouth to answer, but he had none. Just an overwhelming sense of loneliness.
"Come on, Caped Crusader," she said as she touched his hand. "Let's take a walk."
Her fingers were like a live wire on his skin. The shock was electric, jolting his breath from his body and freezing his limbs. He turned to look at her, feeling desperation consume him. Why couldn't he move?
She stopped and frowned. First she studied his face, then his whole body. "Stuck?" she said, pointing to his feet.
He looked down. Somehow he had sunk knee deep into the mud and he hadn't even noticed. "When did that happen?"
"Doesn't matter. Just step out. I'm sure there's a moonlit beach around here somewhere."
He tried to lift his legs, but they wouldn't budge. He frowned, crumpling her damned list even further while his other hand dripped blood from where the rose thorns had pierced his skin. He looked at it. It didn't hurt, but it sure looked dramatic.
"What's that?" she asked, pointing to the paper.
He offered her the rose instead. "For you."
"Somehow I'm not so keen on taking a dead woman's rose. I assume it was for her." She gestured to the nearest gravestone. A woman's name was written there, dark and bold. Lily.
Lily? Who the hell was Lily?
"Shouldn't you have brought lilies to Lily? Or didn't she like them?"
"I… It doesn't matter," he finally said. Then he tossed the rose—suddenly turned into a lily—onto the mound.
"And what about that?" she asked, pointing to the paper. "Last love note she wrote you? Letter telling you she was marrying the hot young Assistant District Attorney?"
"No. It's a list. Of things I want."
"Really?" she said as she reached for it. "Like a shopping list? Did you put T-shirts on it? Regular pants? Or are you more into the spare cape and new utility belt kind of shopping?"
He frowned as her tone finally penetrated his distraction. "Are you making fun of me?"
She laughed. "It's kinda hard not to. Look at you. So far, you've taken out a runaway train, the Blob, Halloween, a psychotic doll, and the zombie apocalypse. But you're going to let a bit of mud keep you from walking with me? Come on. This whole graveside bit is self-indulgent."
He peered at her, trying to process words he could only half hear. Like sounds spoken underwater. "I don't understand."
She flashed him a rueful smile. "I'm walking away. I'm going to swim." She pointed far down the hill to a stretch of pristine sand and the steady rush of the waves. “Looks like Australia, doesn’t it?”
He tried to keep her with him, but he couldn't hold on. Her fingers slipped through his as she stepped around the graves to the gate.