Fire Inside: A Chaos Novel 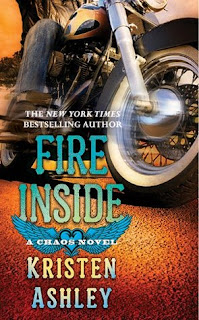 Lanie Heron isn't looking for love-no surprise, considering her last serious relationship nearly got her killed. So when Lanie propositions Hop Kincaid, all she wants is one wild night with the hot-as-hell biker who patrols with the Chaos Motorcycle Club . . .

For Hop, Lanie has always been untouchable. She's too polished and too classy for his taste. But when she gives Hop the once-over with her bedroom eyes and offers him a night in paradise, he can't say no. And he doesn't regret it when he finds that Lanie is the best thing that's ever happened to him-in or out of bed. Now the trick will be to convince her of that.


I. Love. Kristen. Ashley.  Seriously freaking LOVE her!  I can always depend on her to give me that perfect alpha male that turns my insides to mush and just enough drama to leave me wanting more.  I never have to worry that her heroes are going to get a wandering eye (and trust me - that's a HUGE one because it seems like lately that is everyone's "go to" problem and I hate it!).  Her writing style always flows so easily that I feel as though I'm an actual part of the story!  She totally does it for me in every single way possible!

I was a tad disappointed in Fire Inside... and when I say a tad disappointed when it comes to a Kristen Ashley book that means that it still freaking rocked but something about it bothered me and unfortunately that something was the beautiful Lanie.  She had everything that I love about a KA heroine and there were moments that I absolutely adored her... but there were things about her that I just did not quite understand.  I get it to a point but in my head after 8 years she should not still be blaming herself for anything... the girl seriously should have been encouraged to get some real help and her BFF (a woman who not only has a sharp eye but is married to a man who sees everything) probably should have seen it too.   It wasn't that I didn't like her.... she was just kind of... there... if that makes sense?  BUT, with that said... when she finally does come to some realizations about how things really are and she looks at everything from a healthy eye... she becomes someone I like... not love... but definitely like.

Then there's Hop and dear sweet baby, I thought there was no way in hell Kristen would ever get me to like him, let alone FALL IN LOVE with him.  I mean, I feel head over heels, madly in love with the man.  He is everything we all love in a KA hero and then a little more.  The fact that he saw what I obviously didn't when it came to Lanie speaks volumes... but it was how patient he was with her.   Never in my life would I expect a man like Hop to be that patient.

As usual with a KA read, I loved watching the story  unfold and watching our hero and heroine fall in love.  It was a fairly easy, yet faced paced read.  It definitely left me wanting more of the Chaos series because these boys are seriously hot for one... but I'm dying to know what all is going to happen with the whole "drug problem" Chaos is trying to take care of.  How far will these hot biker dudes have to go to keep their turf drug free?  Hopefully we'll learn just a little more in the next Chaos book!

2nd Place - Signed copies of Own the Wind and Fire Inside

4th place - ecopy of Fire Inside

5th place - ecopy of Fire Inside


a Rafflecopter giveaway
Posted by Lori at 2:00 AM