Sneak Peek: Made For You 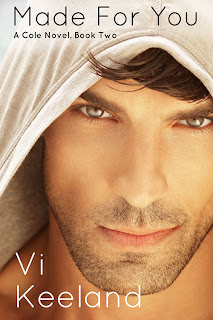 Jack and Syd spent a week in paradise. It was only supposed to be a fling. But life can be funny sometimes, and circumstances brought them back together again. Together they seemed to have found their happy ever after. But when Sydney is offered a chance at the career she has always wanted, she must leave Jack behind to follow her dreams. Can their love survive long distance? Sydney’s touring with a man every woman wants, but he only has eyes for Syd. And an unexpected tragedy leaves Jack feeling remorseful. Can the two find a way through to forever?

EXCERPT
I don’t know how long it lasted, but it was definitely at least a few minutes before we broke, both coming up panting wildly for air and smiling. He leaned down so that his face was in my neck and lifted me up off the ground for a hug. His arms wrapped so tightly around me that it was difficult to breathe, but I didn’t care. The warmth of his breath so close to my ear coupled with the quiet sound of his uncontrolled growl sent a shiver from the tip of my toes straight through to the swell growing between my legs. When he finally put me down, we found my three friends watching intently. For a few minutes I had completely forgotten there was anyone else in the room but us. I looked up, embarrassed, to find Sienna was smiling like an idiot. Kyle looked intrigued at my reaction, and Justin was glaring at us. Kyle smiled kindly as he spoke. “I hope this is your boyfriend, Syd?” “Sorry, yes, this is Jack. I had no idea he was coming.” I stared up at Jack, smiling excitedly. “I can’t believe you’re really here!” Jack pulled me possessively to his side, his arm wrapped tightly around my waist as he spoke. He extended his free hand to Kyle. “Jack Cole.” Kyle nodded and smiled back. “Kyle Smith. Good to meet you, man.” Jack leaned down to Sienna and kissed her on the cheek, whispering something into her ear that made her smile and giggle. Then he looked to Justin and extended his hand. Justin took a second too long before taking Jack’s hand. “Justin Smith.” Jack nodded and I watched, noticing his reaction was different to Justin than to Kyle. Something passed between them unspoken. Not good.

About the Author Vi Keeland is a native New Yorker with six uniquely insane siblings. She has three children of her own that occupy most of her free time, which she complains about often, but wouldn't change for the world. She is a bookworm and has been known to read her kindle at stop lights, while styling her hair, cleaning, walking, during sporting events, and frequently while pretending to work. She is a boring attorney by day, and an exciting smut author by night! After years of thinking about writing her own book, she finally took the leap in 2012. Her most recent book, Belong to You, was published in April 2013 and hit number 8 in the Amazon Erotica Best Seller's list in its first five days! The sequel to Belong to You, Made for You, is due out on July 1st, 2013.