Playing For Keeps (A Neighbor from Hell #1) Review 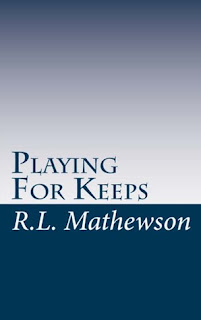 Playing For Keeps by R.L. Mathewson

Book description....
Done with being the world's biggest pushover, Haley decides that things are going to change starting with the aggravating neighbor who has too much charm and not enough restraint. What she didn't expect was to sucked into his world, but Haley has a game plan and she won't let herself forget just what the bad boy next door is capable of.  The last thing Jason expected was for his little shy neighbor to go Rambo on him over some ruined flowers. After he decides to take her under his wing he can't help but that notice that she fits very nicely in his life. Now the only left is to convince her that this is anything but a game.


I am thouroughly pleased with Playing For Keeps..... this is my first R.L. Mathewson book and it was recommended to me by a few of my Girls as something that is somewhat similar to Kristen Ashely.... and since we all know how much I ♥ Kristen I couldn't help but immediately download this book.  I was not disappointed.... quite pleased to be honest.  While I might not see the similarities between R.L. Mathewson and Kristen Ashley I will definitely say that R.L. has got a way with humor.  I cracked up laughing throughout the entire book.  The characters are so funny.... granted a little immature.... but so funny I couldn't stop myself from numerous LOL moments.

Okay so I guess you want some thoughts on the book.... here we go....  I loved Haley, she cracked me up... well once she came out of her shell.  For years Haley was a huge pushover... she let people walk all over her and rather than cause any drama just agreed to... well just about anything..... that is until she see's her obnoxious neighbor from hell ripping her tulips out of her flower bed..... the tulips are quite special to her so she takes action.... and turns a hose on him.  Way to go Haley... put him in his place sister!!

Jason.... couldn't help but find him adorable.... he was immature, loved his food, and openly admits to being an asshole... he doesn't do relationships with women but for some reason when shy little Haley finally lets loose on him and they're forced to spend an afternoon together he finds himself a new buddy.... a hot new buddy, that he has become a little protective of.

Their friendship is cute..... it's sweet..... but most of all it's hilarious.  Jason is obliviously addicted to spending all his free time with Haley and now that she's coming out of her shell she has become addicted to giving him a hard time.  The things she does to him.... OMG... I cracked up.  She's too funny... the whole teasing him with the cake on his chest while he's tied to her bed... LOL, there's a lot more to that and not what you think but I had tears running down my cheeks from laughing so hard.  They become good friends, even admit to themselves they are probably best friends.... BUT their friendship starts gets a little interesting.  Jason can't seem to keep his hands off Haley...  and it gets even worse when him and his friends forget to check in at the hotel they're staying at after a Yankee's game... where they find themselves begging for mercy at Haley's door and Jason and Haley end up sharing a bed.

"Look woman, I don't know what you did, but I haven't been able to sleep since we got back from New York.  I'm tired and bitchy and all I want is some sleep so cuddle your ass up with me or so help me I will kill you."

They were both already fighting feelings for each other before this and now that they've both come to the realization that they can't sleep with out each other.... well..... it's gotten even harder for them... both of them.  As a matter of fact Jason even admits to himself that Haley is that someone he trusted and cared most about in the world.... and then..... Haley takes a chance.  After defending her best friend to a total jerk her and Jason are laying in bed and he's teasing her so she decides she's going to show him she can kick his ass and he should be afraid....LOL... I loved her enthusiasm, the girl had spunk!!!  Anyway, he pins her to the bed and tells her to unleash on him and when she's putting everything she's got into it and nothings working she pulls out the big guns.... She kisses him.... not a hot kiss, not even a firm kiss, just a brush of her lips across his and it knocks him on his ass.

Jason wants Haley... wants her bad but knows that she's too good for him and deserves the world so up until now he's tried to mind himself and not go there... but now he's determined to do everything he can to try and make her happy.  I have to say they are an absolutely adorable couple... there is nothing hotter than a play boy who falls and falls as hard as Jason does.

He loved the way she looked, the way she reacted, he loved everything about her.  She was the most precious thing in the world to him.

Things between the two of them are going great... amazing.  They're both coming to terms with their feelings for the other and realizing how deep those feelings actually run.  He even takes her home and introduces her to his family... which is a huge step considering she's the first girl he's ever brought home... The only thing they haven't done is actually have sex and Haley has a reason for that.... she doesn't want to just be a notch in someone's bed post, she wants to wait until she's with a man she's in love with... a man she wants to spend the rest of her life with and she comes to realize that man is Jason.

Well that is until he totally screws up because he let some girl....go figure... a girl who wants him and comes off as not only desperate but a total beotch... convince him that Haley was playing him.  So he gets this idea in his head that maybe this girl is right and decides to test his little theory.... dumbass!!!  He does, she agrees, then he goes and opens his big mouth and ruins it all... I mean come ON!!!!  Seriously... all I could think after this was... Are men really that stupid?  I mean I know the answer to that question because well... yeah most are but seriously!  So needless to say, Haley is hurt and I don't blame her, not only would I be hurt... I'd be pissed.  So she ends things.... or at least tries to....


Playing For Keeps (A Neighbor From Hell Series)

by R.L. Mathewson is a wonderful read.... I recommend it especially if you are looking for a light easy read with a lot of humor, an adorable friendship, some hot lovin', a picture perfect Happily Ever After, and a little drama... not to mention the amazon price for Kindle makes it even better ;-).   R.L. Mathewson is definitely an author to look out for... I know I will be... well especially considering after reading this book I went on a little R.L. Mathewson spending spree and downloaded the next book....Perfection.... in A Neighbor From Hell Series... plus I may have also downloaded 3 or 4 others..... *smiling a very innocent smile*... (Jenny my lovely... you are starting to rub off on me ♥!)   The humor in this book alone is what made up my mind to purchase more books by R.L.   Check out this book.... it's definitely worth it!!!