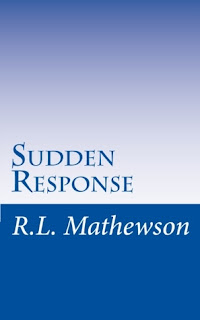 Book description...
Josephine (Joe for short) and Eric, the EMT crew of Echo 17 have been best friends since they were eight years old. They've been through a lot together over the years, but nothing like what they're about to experience.
As the only man in Joe's life it's Eric's job to be there for her and take care of her even while he drives her crazy, especially if he's driving her crazy. There's nothing he wouldn't do for her and when things go south he decides that maybe it's time that Joe moved on, but could he?

OMG.... Sudden Response was an absolute FAN-TAS-TIC book!  I laughed my booty off non-stop and absolutely adored the characters.  Joe is my kind of girl.... She's like this little ball of fun with a smart sassy mouth who sees herself as strong and independent... I just ♥ her!!! She's an EMT and works with her best friend, Eric,  who she's been friends with for over 20 years.

She loved that they were comfortable with each other and could tell each other everything.

Eric.... wow... just... wow.... Eric is absolutely hilarious, I seriously could not get enough of him.  He's like this little kid who thrives on the attention he gets from Joe.  He loves his friendship with Joe, it's important to him... extremely important... so important that it's ruined all of his past relationships but that doesn't really matter to him because he's never been in love.... except for with Joe

This was his best friend, his Joe.  They were close and he didn't give a damn if anyone had a problem with it.  Joe kept him happy, kept him grounded, and had been there for him for everything in his life without question.

So they have this amazing friendship and they work extremely well together but when Joe gets hurt at work Eric decides he needs to find a way to get her a "safer" job... Men!   I have to admit, the thought is sweet... obviously he loves Joe and can't even think about what would happen should anything ever happen to her.... but come on dude, you know it's gonna piss her off... especially when you say things like....ummmm, nevermind!  Anyway... they have this huge fight about this plus a few other things that seem to all happen within a matter of days and their fighting leads to.... a little smoochin'.... and let me just tell you that smoochin'... was HAWT!!!!!!

But smoochin' was as far as it got because they were interrupted...damn Nathan...  and I have to say how terribly frustrating that was.... the chemistry between Joe and Eric is so strong that I was begging for him to kiss her way before he actually did.  Anyway.... So they go on about their merry ways and never did talk about the whole Kitchen incident... much to Eric displeasure... HA!  A man pissed because a woman doesn't want to 'talk' about a little make out session.... And when he brings it up she totally dodges the subject and plays it off like he was asking about something else.  When he finally corners her... more like lays on her.... into talking about a few issues they need to work out between the two of them.... things get... a little ....  ummm..... heated.... well.... more like smoldering!

So things progress between the two of them.... or so you'd think.  But after a weekend of "living out some fantasies" and even confessing their love for each other in the middle of..... ya know..... Eric seems to think that he is no good for her and his track record is proof of that.  So he decides he's going to give her space.....more like pull away.... while she's away for a training seminar.

Needless to say this pisses Joe right off!  She loves Eric and doesn't want to lose his friendship but now she's confused because.... well.... can sex ever really just be sex?  Especially if it happens between two best friends that already have over 20 years of being inseparable and that love each other unconditionally!  Eric seems even more confused than Joe.... well I guess scared is more like it.  He can't lose Joe but is afraid to be with her because he's afraid to hurt her but Nathan..... ah... gotta love Nathan (who I hope will get his own book???) helps Eric realize his feelings for Joe go way beyond just friendship and that in all reality they are perfect for each other.  So Eric... and Nathan for moral support... take off after Joe so he can confess his intentions!

"I love you too, Eric, which is why I'm not going to push you into anything that you don't want.  I'd rather be your friend than lose you," she said, sounding miserable.

Awwwww.... I just love these two!!!!  Ok so they head home as a couple in love and their relationship is just as adorable as their friendship.  It seems the only thing that changes is the intimacy.....

Okay so I have to say I absolutely loved this book.... it was an awesome light, easy, hilarious read.  The ending was absolutely adorable.... not to mention funny and it must be noted that the epilogue was.... The. Best. Epilogue. Ever.... seriously, I cracked up laughing.  Not only did it show us our adorable couple a few years down the road but it was funny... I mean how awkward could that be?  I think I'd die if I were in Joe's shoes.... I mean really, just thinking about it and I can't stop laughing!

As I said in my last R.L. Mathewson review... this is one author to watch out for!  She is quickly becoming one of my favorites with her quick wit and easy plots that keep me entertained...Sudden Response (EMS Series)

is definitely a book to check out... I mean the price alone is what sold me before I even read the product description.... not to mention R.L. is starting to rank right up there with my serious Kristen Ashley addiction ;)