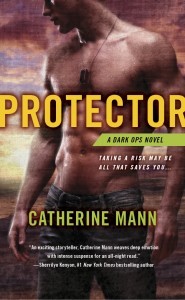 is an amazing romantic suspense read....

Book description....
After barely surviving enemy torture, Captain Chuck Tanaka doesn’t trust himself to do more than ride a desk—but new orders leave him no choice. Assigned to the investigation of a mob boss whose luxury cruise ship is reportedly a hub for terrorist activity, Tanaka goes undercover. His target: JoLynn Taylor, the mob boss’s daughter.  As a child, JoLynn saw her beloved uncle murdered. Since then, she’s stayed far away from her father’s crooked empire. But when he falls ill, she returns, hoping to mend the gap between them. Instead, she finds herself on the run, one step ahead of unknown enemies. The only thing keeping her alive is the man she knows as Charles Tomas, the only man she’s ever been able to trust.  Unfortunately, he’s also the man determined to destroy her family…

This is the forth book in the Dark Ops series and is scheduled to be released on March 6, 2012.  I have not read the first three which I plan to change soon but I received an ARC of Protector and wanted to get my review out there so you can all check out Cathy's amazing skills at writing a romantic suspense, she writes Military Men quite well and who doesn't absolutely ♥ a man in uniform?

What can I say... I have a huge soft spot for Military heroes and Chuck was definitely no exception to that.  He's this smokin hot guy with a tortured past and I mean that in every way possible.... from his childhood to his capture.  He's that guy you just want to pull into your arms and offer him any kind of comfort you can... whatever way you can ;) and he has dimples... a man with dimples is just down right sexy as hell ♥


Dimples.  Angel Kisses.  She savored a rare memory of her mother explaining the tiny indentations as special kisses from heaven.

I had to share this... I love dimples, I have dimples... so reading this just made my day and brought a huge smile to my face because I absolutely adore this explanation :).

It's been 2 years since he's been out on a job and his first job gets him up close and a little more personal than he's comfortable with, with the lovely Jolynn Taylor.

Jolynn.... I liked her but didn't quite love her, I felt for her but still got frustrated with her.... She had a life full of rejection by everyone... especially her Father.  I really felt for her with that but I just couldn't help but get frustrated by the little tantrums she would have when ever she was feeling a rejection coming from Chuck... then again now that I'm thinking about it I have to say maybe I do get it more than I thought, she didn't know that Chuck was dealing with some serious struggling when it came to turning away from her or stopping her..  Anyway, Jolynn has boarded her father's cruise ship after years of estrangement from him because he's fallen ill after a heart attack.  Things don't go so well for her on board and she ends up spending more time with Chuck which she's loving and hating at the same time.


Forced to be in close proximity of each other for days Chuck and Jolynn finally.... yes FINALLY.... give into the urges they have for each other and wow... just wow!  The anticipation was interesting to watch but it was like an explosion when they finally came together.... The passion and chemistry was so thick you could almost feel it.


They're still running from the danger and when Chuck feels like it's time to move and Jolynn decides it's time to go home to her father... and that pisses Chuck off because he does not want her to feel her fathers rejection again but most of all he wants to keep her in the safety of his arms where she feels right.... he hasn't realized it yet but that man has fallen for her and fallen hard at that.  He still takes her to her father and when he leaves he has that tight feeling in his chest and can't shake the urge to turn around and put her in the seat next to him where she belongs.

Jolynn pushed away, even though it hurt but she was doing it for a reason, she'd already fallen and knew the only way to do what she had to do was to push him away... for good or so she thinks...

was a great read..... I always enjoy a great romantic suspense story and have to say that Catherine Mann always delivers on that front!  This is not my first Catherine Mann book, I've read 3 or 4 others and I have thoroughly enjoyed everyone of them....She knows how to combine romance and heart pumping suspense and boy does she know how to create an amazing man in a uniform that will have you drooling in now time!

I have to admit, I normally do NOT like more than two P.O.V.'s but Catherine has a skill at switching P.O.V.'s without the reader getting lost... with that said.... Not only do we watch a beautiful love story unfold between Chuck and Jolynn...who I enjoyed watching them struggle with their attraction and feelings for one another and then watching their relationship grow.... but we also get a secondary love story as well between Rex and Livia.  I'm guessing here because like I said this is the first book in this series I've read... but I'm guessing this is more of a follow up between Rex and Livia who played a cameo in previous books.  It wasn't hard to follow along with this and quite frankly was nice to get a double dose of lovin'  :)

Check out Catherine Mann's Dark Ops series... I plan on downloading the first 3 books in this series so I can catch up because the fifth book... Guardian will be released September of this year.  Here is the link to Defender (Dark Ops Series)

the first book in this captivating series.