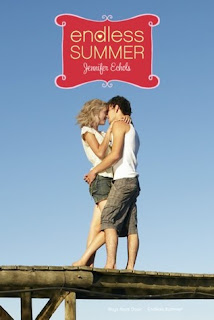 Book description...
Two irresistible boys. One unforgettable summer.  Lori can’t wait for her summer at the lake. She loves wakeboarding and hanging with her friends—including the two hotties next door. With the Vader brothers, she's always been just one of the guys. Now that she’s turning sixteen, she wants to be seen as one of the girls, especially in the eyes of Sean, the older brother. But that’s not going to happen—not if the younger brother, Adam, can help it.Lori plans to make Sean jealous by spending time with Adam. Adam has plans of his own for Lori. As the air heats up, so does this love triangle. Will Lori’s romantic summer melt into one hot mess?

So I have to say that the book description really doesn't do this book justice... at all!  First of all Endless Summer is the sequel to The Boys Next Door... which if you click on the link above it will take you to Amazon where you can purchase both books together as one... where Lori and Adam have confessed their true feelings for each other and have started dating... for real this time.  So with Endless Summer she is not trying to make Sean jealous... BUT... Sean still plays a big part in this book.

Now that Lori and Adam are actually together for real and loving every minute of it you would hope that they would be able to keep themselves out of trouble... but then again this is Lori and Adam we're talking about so, when it comes down to it... no such luck!

But here's the thing... As I said in my review of The Boys Next Door... it's refreshing to go back in time and somewhat relive those teenage drama days.... in a way it's refreshing to see how wrong teenagers can go when it comes to making rational decisions.  I absolutely adored Lori and Adam... I adored them even more as a couple... but they both still have a lot of growing up to do, not only with in themselves but in their relationships with each other, with their parents, and with their peers.

By the end of The Boys Next Door I had become proud of the decisions these two were making when it came to each other.  I was proud that Lori was coming into herself and realizing her true feelings when it came to Adam and what they had together... but with Endless Summer... she began to disappoint me again.  I understood where she was coming from and quite frankly I got myself grounded quite a few times for the things she pulled... not to mention was told I was not allowed to date or even speak to boys because my parents believed those boys were the reason for me misbehaving.... HA!  I was such an angel... *snort*... even I can admit that's funny now, but seeing as I have my own daughter now... and also seeing how my 2 year old son is already a sneaky little guy I'm already thinking that MY little angel will probably get cast in the same category as me... a good girl that a bad boy tried to corrupt.

So Lori goes all balls to the wall in trying to win back hers and Adam's parents approval and as she does this she is doing nothing but causing more problems... even though, when it comes down to it... both sets of parents always blame Adam... so instead of giving up her "fix it" plan, which by the way is a total crap plan.. but definitely entertaining... she does the one thing that would be a sure fire way to not only make her Dad not trust her.. but to destroy any trust Adam has in her....

Now before you go thinking that Adam is all innocent.. he is not!  With Endless Summer we get switching POV's... which I LOVE when an author writes a great male POV and Jennifer does a great male POV for Adam.  Anyway, Adam isn't so innocent in all this... his ADHD gets the best of him 90% of the time and the other 10% he is either doing something incredibly sweet or making his own plans to screw up what he and Lori have... in all reality Lori and Adam really are a disaster waiting to happen... no, what I should say is they are disaster after disaster that has caused total chaos when it comes to relationships.... but they just can't give up on each other.. because what they have runs deep and when it's good between them... it's beautiful!  There is nothing like watching a love blossom and to be honest here... there is nothing like watching a first love blossom.  Lori and Adam are destined to be together but can they actually find their way before they both lose everything?  My guess is yes... but then again they're only 16 years old... and they both seem to fly off the handle before making a rational decision.

by Jennifer Echols was a great sequel to The Boys Next Door... I loved reading Lori and Adam's story and quite frankly I wish there would be more... Jennifer has got a fantastic writing ability that left me with those warm and fuzzy feelings of being 16 and finding your true love... something that always makes me smile.