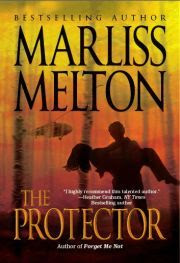 Book description...
Eryn McClellan teaches ESL in Washington, D.C., until the day she’s targeted by terrorists avenging her father’s actions in Afghanistan. The FBI has stepped in, but when it looks like they are using her for bait, General McClellan enlists the aid of the only man he knows he can trust: former Navy SEAL Ike Calhoun.
Embracing solitude in his remote cabin in the Blue Ridge Mountains, Ike thought he’d left the War on Terror far behind. Now he’s stuck shielding a blue-eyed beauty from ambitious federal agents and crazed jihadists. More disturbing still, the charming Eryn seems intent on shattering his self-imposed isolation. Ike does his best to resist her welcoming ways, but he can feel his restraint eroding like a mountain in a mudslide. With the FBI hot on their heels and the terrorists not far behind, Ike willingly wages a one-man war in defense of the woman whose passion and faith have given him the strength to rise above his past.

If I haven't made it clear before I will now... I absolutely LOVE a good Military Romantic Suspense novel, they suck me in until the very end because there is always something happening... and I find it all exciting... exciting to watch two people fall in love during tragedy, and while most people probably don't find the beauty in that.. I do... I see the beauty because I choose to look at the positive side of just about everything.... which is sometimes extremely hard to do, but I'm naturally a positive person and try in find beauty in anything and everything.  Sometimes when reading a M.R.S. you get lost in all the action... but in all honesty Marliss does a fantastic job of blending all of the action, love, and drama together to create a story that will keep you on your toes the entire time.

Eryn was absolutely amazing.. she didn't get on my nerves at all, which considering most heroines... especially those in a M.R.S. novel... do, I was extremely pleased!  Eryn has a huge heart and is sweet as can be.  As a general's daughter she has become the target of a terrorist who is seeking revenge.  She ends up in the hands of a very capable and very trust worthy man.  She's seen pictures of Ike, that her Dad has sent over the years, and recognizes him once he confirms who he is.  She knows she shouldn't because of the "stand back" vibe Ike is so good at throwing her way but yet she can't help but start to feel something for him.  So she decides to grab the horse by the reins and break down his walls in order to get to his heart.

Sigh... Ike... who doesn't love to read about an emotionally wounded man, who refuses to believe he can find love in life?  It's extremely satisfying as a reader to see a heroine break down a heroes walls and climb right into his heart... it's even more satisfying to see that hero confront his protective and possessive feelings towards her.  Ike noticed these feelings in himself almost immediately... granted some of it came from the thought of disappointing the one man who has treated him like a father... but not all.  He saw Eryn's beauty and right off the bat labeled her as being dangerous.... dangerous to his heart because he saw a woman that could make the world disappear for him... make him fall in love... and he was determined to keep his focus no matter how much he wanted to kiss her.

They have many obstacles to get through... not only are they on the run from the terrorist but they are also on the run from the FBI, because Eryn's father did not feel comfortable with the FBI keeping Eryn safe... especially once his fears are confirmed that they were using her as bait.  Here was where I got mad... I LOVED Jackson, the only agent who seemed to want Eryn to be with Ike instead of them because he saw the errors in his boss' ways when it came to protecting an innocent woman, and even though I totally got his decisions I couldn't help but feel a tad betrayed by him when he followed through with orders that essentially almost got Eryn killed... three times.  But at the same time, from the very beginning I could see where a special bond... a friendship that would be beneficial to both Eryn and Jackson begin to form... and I was not wrong... this is where I'm going to say that even though I have yet to read the book description for book #2, I am secretly hoping that it will be Jackson's story... or I should say I'm secretly hoping that Jackson will get a story in this series!

The only time I got upset with Eryn was when she made a judgment call and decided to take some matters into her own hands.... I understood why she was doing it, I mean I completely got it... but that does not mean that I liked it.  Actually, now that I'm thinking about it... her decision which ended up leading to Ike making his own judgment call, that made me fall that much harder for him.

While on the run together, they fall in love.  And it was one of those undeniable kind of loves that makes you want to smile because they both deserve the beauty of each other.  Even though Ike did not want to admit his feelings for Eryn.. you could almost feel them, they ran so deep... but he was afraid to lose his focus and he thought if he lost his focus, he would lose Eryn... not emotionally but lose her to the dangers that were chasing them... so for a while he held tight to that focus.. and while I admired him for his strength, I couldn't help but voice my opinion that he needed to explore what was between them sooner then he did.  BUT, with a helpful push from Eryn, or should I say quite a bit of sass and a lot of understanding... he gives in.. and it was amazing.  He was such a beautiful man, with a guilt filled past who deserved nothing short of the big love that Eryn was willing to give him.  But he did have some things from his past he needed to address before he could feel like he deserved her love... before he could feel like he deserved the forever he desperately wanted with her.

by Marliss Melton was a great start to a series that I can already tell is going to capture my heart in a way that only a Military Romantic Suspense novel can.  Marliss has a way with words that allows you to feel the heart pounding action, feel the beautiful love that is growing between characters, and almost be able to see and touch the scenery.  As I said above it's hard to find a GOOD M.R.S. Novel... and Marliss has got GOOD down to an art!