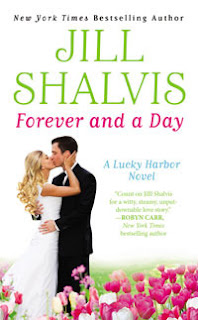 Forever and a Day (Lucky Harbor)

Book description...
LOVE CAN HAPPEN IN A HEARTBEAT.
Grace never thought she’d be starting her life over from scratch. Losing everything has landed her in Lucky Harbor, working as a dog walker for overwhelmed ER doctor Josh Scott. But the day his nanny fails to show up, Grace goes from caring for Josh’s loveable mutt to caring for his rambunctious kids. Soon Grace is playing house with the sexy single dad…
With so many people depending on him, Josh has no time for anything outside of his clinic and family–until Grace arrives in town. Now this brainy blonde is turning his life inside out and giving a whole new meaning to the phrase “good bedside manner.” Josh and Grace don’t know if what they have can last. But in a town like Lucky Harbor, a lifetime of love starts with just one day…

Wow... THANK YOU to the person who created Netgalley, the amazing place where authors and publishers post Advanced Readers Copies of their books for honest reviews...  I absolutely LOVED this book.... every little thing about it... well except maybe all of the chocolate quotes because I have to say when I get on the scale if it's any higher than it was a week or two ago I'm so blaming Jill... the quotes were funny, they were cute, but they made me crave chocolate... and not JUST chocolate.. chocolate cupcakes, chocolate candy bars, and my biggest weakness of all.... white chocolate.  But I guess I really can't complain... since I got so much chocolate while reading Forever and a Day, I was in a fantastic mood

Grace worked herself right up to one of my all time favorite heroines.  She was sweet, loyal, funny, and had a heart made of pure gold.  She had insecurities but they're not your typical insecurities... she's lead the majority of her life trying to please everyone else and now that she is jobless... due to a very big jerk of an almost boss... she's in Lucky Harbor trying to find a new job and taking any kind of side job she can get.  But the problem is, she's not really sure that the plan she had is really what she wants... so in other words she's at her very own crossroads... and when the sexy Dr. Josh Scott walks into her life when he needs a dog walker... her life choices become that much more difficult.

Josh is absolutely amazing... in every way possible.  He's an extremely hard working Dr., he's been taking care of his sister... who is paralyzed after an accident that claimed their parents lives, and he's raising his son... alone, because his Mother wants nothing to do with him.  In all reality, his situation was quite sad, but he's extremely calm and seems to take everything in stride... or like his sister claims, he's a machine.  He's got decisions to make himself and the biggest... and quite frankly the hardest... decision he needed to make, almost became easy once he realized he could really have more time with his family, and especially more time with the beautiful Grace.  He saw Grace for who she was, not what her family wanted her to be.  It was sweet and in all honesty made me fall for him even more.

Grace quickly became the rock that Josh never had... he becomes dependent on her for things she never actually agreed to do and he quickly realizes that she is something special.... someone to be cherished... and most of all someone that he loves and wants in his life forever.  Grace finds herself thrust into Josh's life and actually enjoying it.  She bonds with his sister in a way that no one has ever even tried because she doesn't take offense to her attitude and doesn't put up with it either.  She also bonds with Josh's son Toby in an extremely special way.  Toby, who is 5, barks instead of talks... I have to say that it's all part of the age, I have a 6 year old who taught my 2 year old to bark all the time, actually she also taught him to pant... like a puppy... sigh.  Anyway, Toby barks, and nothing Josh has tried has stopped it.. so when he comes home and hears his son actually speaking real words to Grace he asks her how she did it... and is pretty much in awe of her.

I have to say that even knowing Josh says he fell for Grace before then, I can't help but think that the moment he came home and saw the changes Grace had made by just being Grace, is when Josh got hit with cupids bow and finally understood what true love was.  She quickly worked her way into his heart and there was nothing she or anyone could say to make him want to work her out of it.  Not to mention they had a chemistry that was so undeniable that you can feel it from the moment he rescues her in the ocean... there was no way these two would be able to fight it.

Their story is sweet and reminds you of how crazy life can be, but also how sweet the small things are.  It reminded me that it's easy to take someone for granted... especially those we love most, but to make sure to take the time to thank them for being... well, them!  To thank the ones we love for loving us so unconditionally that they will do what we need without being asked... or even without us realizing that's what we needed.  This is exactly what Grace did for Josh, she made him see that he really did need someone to care for him instead of him always taking charge and caring for everyone else.  Josh made Grace realize that life is what you make it and in the end it's your own happiness that matters... not what someone else wants you to be, because at the end of the day when it comes to love, no matter what occupation you choose or where you choose to live your life... your loved ones will always be happy... because what you're doing makes you happy.

Let's talk about the chocolate quotes... I loved them and I hated them...  I don't think my figure can handle more chocolate quotes, considering by chapter 5 I was craving chocolate so bad I raided my husbands stash... something I never do.... then there was the incident at Walgreen's when my kids and I stopped to pick some stuff up.... we hit the candy aisle... bad idea!!!  So there I am with my 6 year old who is begging for M&M's and my 2 year old who is reaching for anything he can get his hands on, when I get a glimpse of those Hershey's Cookies and Cream candy bars... and guess what?  The king sized ones... were 3 for $3... Yeah, my mouth totally started watering and then I remembered one of the chocolate quotes and thought... hey, if Jill's quote is telling me white chocolate is one of the 4 food groups then I'm all over it.....plus since it's a cookies and cream candy bar it not only has white chocolate but regular chocolate too...


Forever and a Day (Lucky Harbor)

by Jill Shalvis was an absolutely delightful read.  It was sweet, funny, easy, and at times quite steamy.  I've read a few of Jill's other books and I have to say that I enjoyed them... but not like I enjoyed Lucky Harbor.  The only thing I regret, is that I have yet to read the other 5 books in this series, which I plan to rectify... immediately.  Her writing style is addictive, funny, and kept me interested until the very end.  I look forward to reading more of her work... especially more Lucky Harbor... I only hope that they lack all the chocolate quotes....
Posted by Lori at 2:00 PM