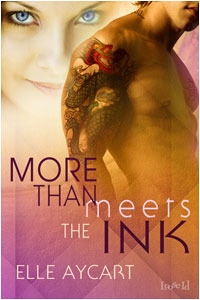 More than Meets the Ink

Wickedly sexy James Bowen is a bad boy of the highest order -- tattoos and attitude included -- which unfortunately ranks way up on Tate's not-a-chance-in-hell list, right there along with skydiving naked over Teheran and juggling Ebola vials just for kicks. But what the heck, she's on holiday, the guy is absolutely irresistible, and she needs to unplug from her life. With her dad and brother gone, Tate is left to deal with the family restaurant, which is fast going down the drain. Her employees are acting out, her boyfriend has bailed out, and her very own private stalker is emailing her to death with lovely threats of doom, fire, and dismemberment. So yeah, maybe a little holiday fling is in order. Strictly sex though, and no follow-up whatsoever once.
She hadn't counted on her take-charge holiday fling having an opinion of his own and stubbornly sticking around, before and after the sex, making himself at home in her life. There is definitely more to James than meets her prejudiced eye, and even if she's not ready to look deeper, James isn't prepared to permit her not to.

First things first... Big huge Thanks to my gorgeous girls for recommending this book... there are so many wonderful things you said about this book that made me want to immediately pick it up.. but there was one little thing... and you girls know what I'm talking about

I have to say that I have mixed feelings about Tate... there are things that I loved and admired about her... her humor, quick wit, ability to express her thoughts, and the fact that she is not afraid to admit that she will cast a quick first judgement that may or may not be accurate.... I admired the strength to keep going on with the family business, and her determination to not let it fail.. when in all reality she could have done what the rest of her family did... tuck tail and run.  But then there are the things that got on my nerves... mostly her judgement, the way she was so quick to toss James right into the loser category because of his tattoos and crazy good looks... while I laughed at her explanations... I also found them to be quite offensive, and have to admit that she was an extremely lucky woman that James actually found her judgement and outbursts kind of cute.  Then there was the fact that she was terrified of a relationship... any kind of relationship... and while I understood where she was coming from, especially after what she went through and was continuing to go through... on her own... I couldn't help but feel like she took her insecurities to the extreme, especially considering James gave her no reason to feel that way.

Now, James.... wow... he was absolutely fabulous and quite frankly a saint for being so willing to put up with some of the things that Tate said.  Then there are the things that come out of that mans mouth that... OMG, talk about something that had me flustered... which does not happen all that often LOL.  But James knows, almost from the moment he met her, that there is something special about Tate... something so special that he has to have her in his life.  Even though he doesn't want to, he goes along with her "sex only, no strings, no repeats" rule because he's determined to convince her that they should give "them" a shot.  But when it's time for her to return home and she gives him the complete brush off, he finds himself rushing back home too...  in all reality he's rushing back home to the same town Tate lives in too... and then he decides that she is it for him and he is not going to let her walk away, he is going to prove to her what they have means something... that it's something worth fighting for... that it's a once in a lifetime kind of special. Now what kind of a girl would be able to resist that?  I know I couldn't... no way could I considering he treats Tate like pure gold!

Obviously James has a chase on his hands here... but I have to say that even though she is fighting him about them being together, she's really kind of doing a pretty poor job of it... and what they share together is extremely sweet... Oh, and definitely H.O.T. hot!!!  The sad thing is... James IS the only good thing Tate has in her life right now... especially considering her employee's suck, she has yet to deal with the death of her family, the rest of her family has left her to fend for herself with the family business... that is quickly going downhill, and worst of all... she's got a stalker... and not just a "Hi I think you're hot and I'm obsessed with you" kind of stalker.... her stalker means her harm.  So instead of sharing this with James right away, she hides it... and to say that he is unhappy with the situation and her when he finds out... is a complete understatement!

More than Meets the Ink

by Elle Aycar is such an amazing all around read that I can not wait to start Heavy Issues (Cole's story)... well, actually I'm not... as soon as I finish typing this out.... I'm all over it