Before You Go by Clare James 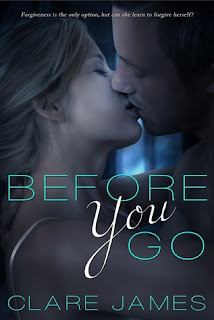 Paralyzed by the past and terrified of the future, Tabitha Kelly is broken.
After a public sex scandal at her college, Tabby moves to a new city with a new school, convinced she can start over. But she soon realizes the changes are not enough. Tabby must take action to help her heal and move on from the past.
And though it sounds crazy, she believes a one-night stand is the best way to take back what’s hers. If she can choose where, when, and most importantly, who … maybe she can regain control.
First, she needs a willing participant.
She finds more than that when she meets Noah Adler.
Unfortunately, she can’t go through with it. And when she tries to forget about the plan—and the guy—it becomes impossible.
Noah quickly weaves his way into her new life and her heart. But as he comes dangerously close to discovering her secret, Tabby’s at risk of losing it all.


Noah, Noah, Noah.... this book is seriously all about Noah and the extent he is willing to go for Tabby and the love he feels for her.

Watching these two fall for each other was something that just made me smile.  She didn't want to fall... she was scared to fall because of her past.  But there was no question about who would make her fall.  He was just to persistent (and not in the bad way you're thinking, in the way that he always seemed to be there when she needed him most) and it was more than clear that these two had a connection that was beyond their interests.

I thoroughly enjoyed this book... to the point where I felt every emotion that was running through Tabby and I could see the love Noah had for her.  And that love he felt was clear very early on and made even more known towards the end of the book when Tabby's past is not only discovered but about to become even more public than she ever could have dreamed.