How to Love Blog Tour & Giveaway

How to Love (San Amaro Singles) by Kelly Jamieson 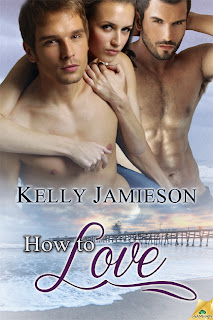 
Kelly Jamieson is a best-selling author of over twenty-five romance novels and novellas. Her writing has been described as “emotionally complex”, “sweet and satisfying” and “blisteringly sexy”.

Kelly is giving away a tour grand prize of a $50 Amazon/B&N/Kobo gift card (winner's choice) to one winner from all the different tour stops. Winner will be selected by Rafflecopter.

I have to warn you that the following excerpt is explicit... however I HAD to post it because there is this funny little part in there and quite frankly anyone who can make something that hot, funny too... is freaking awesome!  I can't wait to read this book!


Explicit Excerpt
“Okay, Jules?” Mike moved up behind her and his body heat radiated through her T-shirt. He set his hands on her waist and rubbed his face on her hair. She nodded.
Carlos stepped in front of her, now wearing only a snug pair of black boxer briefs, and started to unbutton her jeans. Mike slid her T-shirt up over her ribcage, nudging her arms, and she raised them so he could lift the T-shirt over her head. A delicious warmth filled her, her limbs going heavy, her eyes falling closed as their hands brushed over her body, removing her clothes. Mike’s chest pressed up against her back, hot and hard, his hands sliding around over her stomach, holding her, so carefully.
Carlos helped her step out of her jeans, then stood before her. He lifted her chin with one hand and kissed her mouth, and she sank into the dream, into sensation, heat and touch, whispered sighs and soft breaths, the taste of Carlos on her tongue, her lips. His lips were fuller than Mike’s, his kisses different but both so sexy.
Mike’s hand slid lower down her belly, resting just above her panties, right where she ached deep inside, his mouth finding the side of her neck and laying hot, open-mouthed kisses there.
“Too much,” she moaned, almost overwhelmed by their two big bodies, all heat and muscle, their hands, their mouths.
“Oh baby,” whispered Carlos. “You ain’t seen nothin’ yet.”
“I think that’s a song.”
He smiled. “It is. A great song.”
Mike snorted behind her. “Bachman Turner Overdrive? Seriously? That is not a seductive bedroom song.”
“Sure it is. I’d sing it for you, but…”
“Christ, no.”
Jules let her head fall back on Mike’s shoulder, amusement filtering through her once again.
“I’m a good singer,” Carlos continued, bending to kiss her throat, then drag his tongue down her chest.
“I’m sure you are,” she murmured. Her breasts tightened and sensation cascaded over her.
“No, he isn’t.” Mike nibbled her ear lobe. “He’s a terrible singer. That never stops him, though.”
“Sssh,” Carlos said, nuzzling the inner curve of one breast, making her breath catch in her throat. “This is not the time to discuss my vocal abilities.” Her nipples tingled in anticipation of his touch, and she lifted heavy arms to slide her fingers into his short hair. “This is about Jules.”
“Oh.” That was so nice. So, so nice.
Between the two of them, every nerve ending in her body buzzed, Mike’s fingers playing with the edge of her panties, Carlos rubbing his beard against the skin between her breasts. She let her fingers slide through the roughness of Carlos’s short hair. He nibbled at the upper curves of her breasts above the edge of her bra and she arched her back in response. Mike lifted a hand to cup her chin, pulling her head back even farther so he could kiss her mouth, deeply, hungrily. She moaned.
So much sensation, everywhere, surrounding her, consuming her with almost unbearable sweetness, pressure and need building low inside her. Her knees were weakening again.
Carlos reached around behind her to unfasten her bra, releasing her swelling breasts from the cups. She dropped her arms to let it slide off, still leaning back into Mike’s embrace, her nipples tightening even more at the air brushing over them. “Oh, Jules,” Carlos whispered, cupping her breasts, rubbing his thumbs over her nipples. “You’re so beautiful.”
She couldn’t respond, blood pulsing hotly though her veins, her head spinning from it all. His gentle touches on her nipples, brushing his palms across them, had pleasure rippling through her, nipples so tight and aching she couldn’t stand it. She drifted in an erotic haze of mindless sensation. Her entire body quivered and she made a needy little sound into Mike’s mouth.