Kiss This by Hadley Quinn 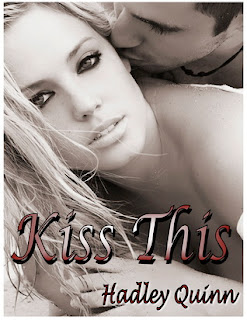 22-year-old Camryn Jacobs lost the love of her life once and vows to never kiss another guy unless she's in love with him. When she meets Teague, their attraction to one another is off the charts, and for the first time in two years, she wants to disregard her rule.

But Camryn makes a bet that he can't go just one week without kissing her. She's protecting her own fragile heart, but her wit and smart mouth end up driving Teague crazy.

When Teague is equally skilled at her challenge, their friendship turns complicated. He's not at all what she assumed, and he makes her feel things she never expected to feel. But sharing her true reasons for the no-kiss bet hurts too much and she keeps him in the dark.

Teague has his own secrets to hide, starting with his last name. It's the reason he left town--to lick his wounds until he can piece his life back together. His time with Camryn proves that it might actually be possible, but with the threat of his family and his past ruining all that he's finally gained, can he really take that risk again?

Loving might be easy; learning to trust again could be too difficult to achieve...


I've had my eye on this book for a while now and unfortunately had so many other things on my plate I just wasn't able to get to it.  Then I had a day where I needed to clear my head and just wanted to read something.. so while going through my Amazon wishlist I came across this one again and immediately one-clicked it.  Let's just say that I am so glad I did because the friendship and then the love that grew between these two characters totally did it for me.

Camryn had it all and lost it once so she was hesitant to move forward when it came to any kind of romantic relationships.  She's a character I was able to admire and love.  A character I was able to relate to and a character that I would love to read more about!  She knew there was something special about Teague but she wasn't going to let that spark of attraction change her plans and her plans included a little bet that turned their relationship into a beautiful friendship that made the relationship we all know they would end up having that more special.

Teague is hard not to love.  He obviously had some issues going on and needed to escape the real world but meeting Camryn made him have to face reality a lot quicker than he had intended.  There is no doubt in my mind that he was gone for her the moment he laid eyes on her and then her little bet made her even better in his eyes.  Unfortunately he had somethings that needed to be handled, and not necessarily by him, for his relationship with Camryn to move forward.

Their story is sweet and reminds you of how amazing it is to fall in love.  It's not always easy but it's always worth it in the end!

I definitely recommend this one to all my book lovers!