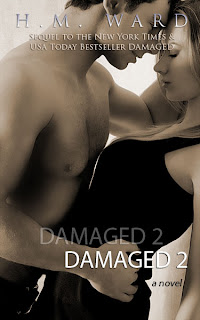 Home isn't supposed to be dangerous, but for Sidney it is. Returning home means that she has to face her past. It's not just the man who hurt Sidney that makes it horrible, but the family that didn't believe her. They were dead to her, but now that her mom is really dying things seem different. It's a chance to set things right.

What Sidney doesn't realize is that she's dragging Peter into a collision course with his past. Peter must deal with the demons haunting him if he wants to move forward with Sidney. He's willing to give up everything for her, even wade deeper into his past life to help her move forward. But, Peter isn't sure if he can get over what happened to him in New York.

Author Event Giveaway: The author will be offering the event giveaway below. Enter the Rafflecopter below

Blog Giveaway: (1) eBook copy of Damaged 2. Winners will be given a coupon code to download their preferred format on Smashwords. Enter the second Rafflecopter below.

Tension lines Peter’s neck and shoulders. His jaw shifts from side to side, like the conversation he just had pissed him off. His eyes flick up from the floor and meet mine. “My brother’s an asshole.”
I smile at him. “So is mine.”
Peter watches me for a moment and sighs. He runs his hands through his hair and stretches. The anger that was there washes away, but it’s not totally gone. “I need to tell you something.” The way he says it makes my stomach dip. The tone, and the way he looks away from me, sends a shiver down my spine.
Peter takes my hands and pulls me over to the couch. At first we’re seated next to each other and he’s holding my hand, but it’s like he can’t sit still. Peter is up and on his feet a few moments later, pacing. Every few seconds he tries to tell me something, but can’t choose the right words.
Peter makes an aggravated sound in the back of his throat. When he turns and looks at me, I know there’s something wrong. His dark brows lift and bunch together as his lips part. He stares at me for a moment, and then manages, “I didn’t want to bring this up, not now, but you need to know something about me.” He swallows hard and looks away.
I push off the couch and walk over to him. “You can tell me anything.” When I touch his arm, Peter jumps. It makes me nervous. Why is he acting this way? I grin at him. “You’re not the one who put the squirrel outside the bathroom window, are you?”
Peter snorts a surprised laugh and looks over at me. He takes me in his arms and pulls me to his chest. It feels so good, so safe.
He kisses the top of my head and says, “Do you know anything about the Ferro family?”