Until The Sun Falls From The Sky Review 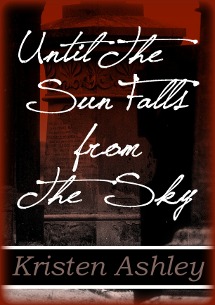 Until the Sun Falls from the Sky (The Three Series)

... Yes, another KA treat that will suck you in and have you anxious for more.

Book description....
Leah Buchanan’s family has been in service to vampires for five centuries. Even so, Leah wants nothing to do with her family’s legacy but when she’s summoned to her Selection by the Vampire Dominion, under familial pressure, she has no choice but to go.  Lucien has been living under the strict edicts of the Vampire Dominion for centuries but he’s tired of these ancient laws stripping away everything that is the essence of the vampire.  So he’s taking it back.  And this is because Lucien has also been watching and waiting for decades for Leah to become available for a Selection and he will not be limited with what he can do with her. He will have her, all of her.  Therefore, Lucien is going to tame Leah, even if he gets hunted and killed for doing it.  What neither Leah nor Lucien expects is the strong bond that will form between them, connecting them on unprecedented levels for mortals or immortals. And what will grow between them means they will challenge their ways of life and their union will begin the Prophesies which makes them one of three couples who will save humanity… or die in the effort.

I do NOT know how she does it but Kristen Ashley has got my mind wrapped around her adorable writing fingers so tightly I'm bound for life.  Every single one of her books has sucked me in to the point that I'll be out to dinner with my husband and kids thinking.... "Hurry up waitor and deliver our food so I can scarf it down and get back home to E. Luke (my Kindle's name) and finish up my latest KA book"  Now I hate to admit that because like Kristen said to me family time is important but I just can't help it... It's an addiction, and I will take the first step in admitting "Hi my name is Lori and I am a KA'aholic"  I will go as far to say Kristen Ashley is an author you HAVE to read... but fair warning... her books are like Pringles.... "Once you pop... you just can't stop".  I ♥ you Kristen.... your books, your friendship, your generosity are all quite special to me but most of all I have to thank you for bringing me my girls (you all know who you are too ♥)!


Let's talk a little about Until the Sun Falls from the sky....

Leah is awesome... she is stubborn, sassy, and full of spunk... you know the kind of girl who makes the chase fun for a guy?  But she's not exactly being chased.... for years her family has been concubines for the Vampire world and quite famous concubines at that because their time spent with their vampires has been longer than average.  Leah does NOT want to be a concubine, she wants to be able to go one with her life but at the same time she does not want to let her family down.  Little does she know she's got a very important vampire who is planning on voicing his intentions at The Selection which is kind of like a ball where vampires choose their next concubine and sign a contract as long as the human agrees.  Before even meeting him she hears numerous vampires vocalize how pleased Lucien will be and when he arrives she feels funny... almost like she's drugged.. but that's not it, Lucien is claiming her in his pretty hot vampire way

Okay so Lucien... another one of those super hot alpha males Kristen is so awesome at creating.... is amazing, perfect in his own way, and sexy as hell... but I have to tell you it took me a little while to fall for him.  He was kind of like Ty from Lady Luck he had to grow on you but once he did... well... let's just say that there is absolutely no doubt that Kristen can write one hell of an amazing man ;).  So Lucien has wanted Leah for years... twenty to be exact.... but there's more to his feelings for her

There's nothing quite like kicking off a new relationship with a good old dose of.... well... pissed of woman and a male who knows what he wants and is determined to get it.  Needless to say Leah and Lucien do NOT get off to a good start... I guess what I should say is they get off to a terrible start and this was part of why it took me a little while to warm up to Lucien... among other things, we'll get to those things soon.

So this is what's absolutely interesting and captivating about this story... vampires do not spend the night nor do the live with or sleep with their concubines... those pleasures are reserved for their mates and it is also vampire law that vampires not take humans as mates.  But Lucien wants to change things... he wants Leah... ALL of Leah which includes filing for vampire divorce from his current bitch of a mate Katrina, moving in with Leah, and of course sleeping with her.

Leah fights this... fights it to the point that Lucien finds it all amusing and is looking forward to taming her.... lol... I will admit that at first I struggled with how the vampires refer to humans but after reminding myself that this is not a typical contemporary romance novel but a paranormal romance I was fine... and actually found it all kind of hot... I mean how would you like to be this woman that a seriously hot and gentle (for the most part) vampire finds so irresistible that he's willing to risk every thing for you?  And to top it off finds all of your sassiness and plays at rejection amusing?.... Yeah I so wouldn't mind that.... Lucien can come tame me anytime he wants.... Damn, after reading this book I don't know that I'd put up much of a fight.... if any ♥.  But Leah fights it and she has good reason to... she knows it, she can feel it.... that if she gives up and gives in to Lucien and his charms that she will fall hard for him and since she knows that he will eventually release her and take on a new concubine she resists it... to keep her heart in tact.

Lucien.... honey you were doing so good, actually getting somewhere, actually worked your way into my heart... And then you had to go and screw it all up.  I can not believe he actually...... oh I'm so not telling but I will tell you that he had me SO mad that I had to bite my lip and take a deep breath because I was this close (finger and thumb a breath away from each other) from throwing E. Luke across the room.... I only restrained myself from doing this because I absolutely adore E. Luke and he didn't do anything wrong... so I powered through my anger at Lucien and continued on with the story.  Oh boy was I glad I did too because after that is when Lucien finally starts breaking through Leahs defenses and.... wow... yeah here is where you can start to feel the love that is just beginning but you know will be absolutely beautiful between these two.

There's still heartbreak, tears, fights, and lies but in the end.... when their love is confessed, when they both feel confident that nothing is being held back anymore... it makes everything that happened seem almost worth it... like that feeling of after all we've been through there's nothing we can't overcome together kind of worth it.  And it's Leah that vocalizes that....

"When you have our kind of love, you can't be beat because you won't allow yourself to be beat."


Until the Sun Falls from the Sky

by Kristen Ashley is a fantastic read.  For me this book just proves that KA is one of the best versatile authors I've come across.  Her contemporary romance novels are some of my absolute favorites and now her skill for an awesome paranormal read have confirmed that it is absolutely NOT necessary for me to read the book description before hitting that damn 1-click button on Amazon (Damn you Jenny, what have you done to me?... lol ♥).