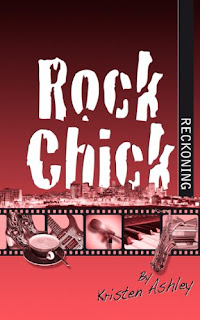 Book description...
Stella’s the lead singer and lead guitarist of the Blue Moon Gypsies and Stella used to be Mace’s girl. Mace broke up with her though and the loss of him rocked her world. But Stella gets a call, late at night (again) from one of the members of her crazy band. She has to go play clean up (again) and runs into Mace (and a shed load of police) and ends up getting shot.
Mace finds he doesn’t like it much that his ex-girlfriend got shot, right in front of him but it’s worse. A very bad man has thrown down the gauntlet and ALL the Rock Chicks are in the firing line. Stella doesn’t want Mace to be the one to keep her alive but she has no choice… mainly because Mace isn’t giving her one.

So I decided to get a little help with this review for a few different reasons..... One being I love it when my girls want to be a part of my reviews, simply because I love showing all of you how we interact which most of the time is quite hilarious.  Especially considering we are from all over the world and have only known each other a short time but have connected so strongly it's like (as my husband says) we were all separated at birth.  Two, I struggled with this book... not because I didn't like it but because it wasn't exactly up to the normal, explosive, awesomeness that is Kristen Ashely.  Don't get me wrong RC Reckoning was still good... but... it was also lacking.  So before I begin I want to give a big huge Thank You to my girl Gitte for helping me out with this review and discussing your thoughts with me!  I love ya Gorgeous!!!!


Gitte:  When KA writes her main characters they are usually done with such skill that you end up emotionally connected to them and you feel them. However, I never got Stella, she drove me crazy!! She clearly loved Mace but never fought for him, she came across as having no real backbone in her relationships and love. The only time she redeemed herself was when Mace needed her due to his past!


Gitte:  I loved the idea of her..a TOTAL Rock Chick not only in name but the lead singer of a rock band...she should have been an amazing character, tough, full of grit instead though she seemed slightly weak and haunted. Oh and she never really developed any form of relationship with the rest of the Hot Bunch and Chicks which made her seem like an outsider.

Maybe that's what bothered me?  I loved the idea too... I loved her set lists even more though.  I still have Black Betty stuck in my head... it was also one of my brother's favorite songs so that could have something to do with it.... Then there was her band, I hated that she felt she had to babysit them... they're grown men and if they don't make the right decisions... well... too bad, so sad... shit happens. 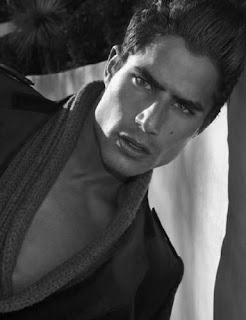 Now Mace... well, let's just say I still have mixed feelings about him.  One minute I'm totally in love because I absolutely ADORE his nickname for Stella... Kitten, how cute!!!!  But then the next minute I just want to scream at him to open up a little more... give us some of that hot badass vibe that every other hot bunch boy gave....


Gitte:  Now I did love Mace but it took me a bit longer than normal for a KA hero because of how he left Stella the first time. I didn't think the reason was good enough, though I can see how totally annoying it would be to clean up Stella's mess all the time and get nothing in return, which was my take on the break up. He is one of the only KA heroes I have cried over because his past was heart breaking! I didn't like the ending for him becoming a security manager!!!!

Ditto again GG....  I too hated his reasoning for walking away from Stella, it just didn't really seem like a real reason to me, or something a total badass alpha male would do... and yes, I too would have gotten annoyed with having to take care of Stella's band, but that would have been my reason number one for walking out... they would have driven me nuts. Talking about the end it was almost as if he all the sudden became her bitch instead of her Alpha... I didn't care much for that either.

I hate to admit this but I have to give you guys my honesty and so that's what I'm going to do.... I actually got more out of the other's POV's in this book than I did with Mace and Stella.  I loved catching up with them, seeing where they were emotionally with their men... because to me each Rock Chick and Hot Bunch had massive amounts of chemistry... like consuming, get me all hot and bothered chemistry.... and I just felt that Mace and Stella were lacking in that department.  The story seemed to focus on everything else other than the actual relationship.


Gitte:  I loved the side line stories and catching up on everyone else and as I said Mace's story broke my heart...I did love Stella's love of music and the idea of her..but together I just didn't get the connection...

The epilogue... The queen of Epilogues delivers as usual... BUT.....


Gitte: The epilogue...KA is known for her AMAZING epilogues, she is the queen of epilogues so I was a bit sorry to read the fast forward. it ruined it a bit for me to know what happened to Hector and Ally...I know we were warned not to read but how can you not??? Saying that though...Hector's book was my FAVE and Hector YUM..my Fave RC man!!

To me, it didn't really ruin it... but then again I am that person you can describe the entire book to, still read it, and feel the same emotional connection that I would have even if I didn't know what was going to happen... actually I can sometimes get MORE out of a book if I know what to expect because I won't be skimming through everything trying to find out what happens next..... but I do have to say that with this Epilogue it was almost like the series is over... which it is not!

Oh!  And I'm gonna throw a big DITTO to what Gitte said about Hector... YUM!  He is quite... delicious, not quite my fav because in my eyes NO ONE can replace my Luke... BUT... he comes in a close second.  The things that come out of that man's mouth... HELLO HOT BALLS!!!!!

by Kristen Ashley... while still consuming and a good read, is not my favorite KA book.... Where most of my KA books earn themselves a solid (if not more)★★★★★.... RC Reckoning got a ★★★ rating from me.  I wish I could say more happy things about this book and tell you all how much I loved it but after reading the other stories, I just can't because I honestly felt like this one was lacking.... Now with that said, don't skip it just because of my thoughts, there are still some extremely awesome moments in this book and you also get a glimpse of Hector... our next KA Alpha to take on a Rock Chick.