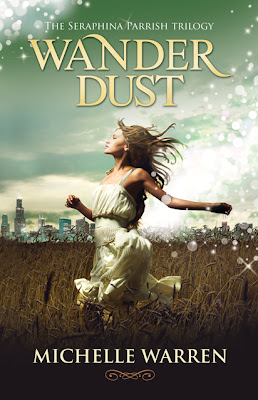 Book description...
Ever since her sixteenth birthday, strange things keep happening to Seraphina Parrish.
The Lady in Black burns Sera’s memories.
Unexplainable Premonitions catapult her to other cities.
The Grungy Gang wants to kill her.
And a beautiful, mysterious boy stalks her.
But when Sera moves to Chicago, and her aunt reveals their family connection to a centuries old, secret society, she is immediately thrust into an unbelievable fantasy world, leading her on a quest to unravel the mysteries that plague her. In the end, their meanings crash into an epic struggle of loyalty and betrayal, and she’ll be forced to choose between the boy who has stolen her heart and the thing she desires most.

My first true love... well when it comes to reading... is Contemporary Romance but every once in a while I like to throw a good Young Adult or even a Paranormal book in the mix to give my mind a break..... With Wander Dust I got one heck of an amazing break.

Sera is an absolutely wonderful leading lady, in spite of not having a father who pays particularly close attention and avoids any type of affection towards his only daughter, She comes across as a young woman who is determined and strong.  I admired her throughout the book, there were so many times she could have thrown her hands in the air and given up but she didn't... she wanted answers and no one was going to stand in her way.  The best part of Sera was her interest in a boy.... a boy that she really liked.... a boy that made her feel safe.... a boy she felt drawn to....

Max Bishop... yep total crush worthy boy who had me frustrated in ways I can't even explain... is mysterious and totally hot!  He's kind of stand offish and sends Sera a few mixed signals but yet it's clear that he has strong feelings for her and those feelings go beyond their connection.  I just wish that he would have.... never mind.... I can't say, I won't say, you need to read this book to find out because anything I say will give away too much of the story... it take away from the ending that had me sending Michelle an email and asking her when the release date for the next book will be.... and the cover and title aren't even being released until May 18th....

It took me a little while to actually get into Wander Dust and usually I won't put the effort in...BUT... there was still something about this book that I just couldn't put it down until I knew what would happen next.... and before I knew it I found myself so engrossed in the book that I actually got mad when I realized I had to run to the grocery store before it got too late.... then as soon as I got home and got the perishables put away (forget the dry foods, they're still sitting on the kitchen table as I type) I dove right back in and lost myself in Sera's life.... and boy was I glad that I did because things got even better... the last 20% of the book had my stomach in knots and my brain trying to absorb what I was reading as quick as my eyes could take it in.

I want to send a big Thank You to Michelle for sharing her creative side with the world and let her know that I'm ready to find out what happens next in Sera's life and most especially since her and Bishop have..... oops, almost gave something away there!!!

by Michelle Warren is an amazing YA novel with an extremely fascinating take on time traveling... definitely worth it to check it out!!  Michelle has a way with words that will make you feel as if you're a part of the story... you can almost see the places and actually feel the emotions Sera is feeling... she's descriptive but doesn't over use her words, it was refreshing and I look forward to reading more of her work.

Now normally I do not post Book Trailers because I don't like to look for them mostly because once I start watching You Tube it's like I can't stop... that site is so addicting, I can hardly control myself especially when I start out looking at one thing and end up glancing at the clock 2 hours later only to be cracking up laughing at funny baby videos... funny baby videos are my weakness LOL... Anyway, when I received the marketing kit from Michelle last week and happen to see she had a book trailer I knew that I had to share it with you after I read the book and then watched the trailer... so take a peek......