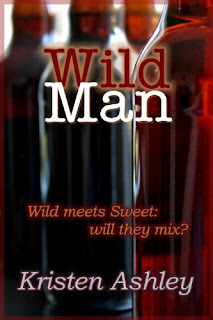 Book description...
While filling her display case in her bakery, the bell over the door sounds and Tessa O’Hara looks up and sees the man of her dreams. Within thirty seconds he asks her out for a beer. Thirty seconds later, she says yes. But after four months of falling in love, she discovers he’s an undercover DEA Agent investigating the possibility she’s involved in her ex-husband’s drug business
Obviously Tess decides this means it’s over.
But DEA Agent Brock Lucas disagrees. A man on a mission who’s really committed to his job, he’s spent years in the underbelly of Denver with the dregs of society. And spending four months with Tess who’s as sweet as her cupcakes, he seriously enjoyed his job. But during Tess’s interrogation, Brock learns the devastating secret Tess is carrying and he’s determined to be the man who helps her heal as well as take her back as she walks on the wild side.
As wild and sweet mix, they face challenge after challenge of family struggling with history and terminal illness. Not to mention, Tess’s ex-husband, the drug lord and Brock’s ex-wife, who has a very big playbook are scheming to tear them apart.
But Brock Lucas has wild in him and once in his past on the trail of vengeance he let that wild loose, making a mistake that he would have no idea years later will put his sweet Tess in the position to pay his penance.

I know it's been a while since I've done a KA review... and to be honest I'm kind of having KA withdrawals... so I have decided that I'm going to have a KA marathon with the intentions of finishing up the rest of the Dream Man Series and then finish up the Rock Chick Series....Of course I have already read these books but I still need to tell you all how amazeballs they are and in order for me to give you my best opinion possible I must lose myself in these stories with Hot as Hell alpha men... I know it's a tough job and a total sacrifice...yeah, okay it's a freaking fabulous addition to my days, but someone's gotta do it... Right?... Right!

First up in my KA marathon is Wild Man, the second book in the Dream Man Series, and I have to say that I absolutely LOVED this book.... As of right now it's my favorite of this series and it all comes down to the characters and how the interact with each other... talk about sweet!  Tessa is an absolute doll... she's super sweet, extremely loyal, loves deep, has a beautiful way with words that lets you know that she is not playing any games and doesn't intend to..... I wholeheartedly ♥'d her.... I completely adored her.  In ways she reminded me of myself but she also made me want to be a better woman and show the world how sweet life really can be with a few extra smiles.  Tessa is the definition of sweet.. literally... she owns and runs a successful bakery and I just loved how she compares herself to her cakes and the mountainous swirls of icing... it's too darn cute.... BUT, she is also a woman who has been through a lot and when cornered she's forced to reveal a secret about women in general that most of us prefer to keep but one that we all live by for one reason or another....

"I'm like all women.  You see this but inside there's something else that I won't let you see or him see but it's the mess he left me.  But that's mine.  No one gets to it.  Everything you get and he gets is a show.  One thing you learn really quickly and really well when that kind of thing happens to you is to be a fucking great actress." 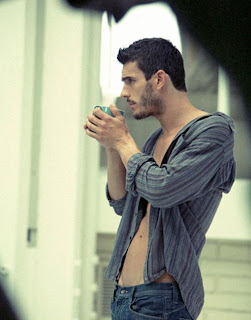 Then you have Brock.... Sweet Baby Jesus that man is seriously sex on a stick.   He's got the whole rugged look with the five o'clock shadow and he openly admits he is wild... the kind of wild that will treat you with care... but still wild.  Then he knows exactly what to say and how to say it and half the time he does this in one of those growly deep voices that just makes you get shivers and tingles in all the right places.

"I can't make any promises about where this is gonna go but what I can do is give you me, keep you safe while you walk on the wild side and work my ass off to do what I can so this never goes bad for you."

See?  Total hottness... as a matter of fact just last night I sent a message to my girl Nikki (I ♥ ya HT!!) because she is over the moon over our man Brock and because I had to confess that I forgot how swoon worthy he was with all his growling and hot words and she reminded me how much Brock really is overlooked when it comes to all of our uber hot KA men... so in the words of my girl HT.....

"Jesus LB he is freaking Hottie McSwoonballs! You don't hear much from peeps about Wild Man, but I loved it. Tess was a great h and Brock.... well I named my kindle Brock cos of his super hotness factor. That chair throwing scene?? Suh-wooooon"

There ya go... You'll understand the whole chair throwing scene when you read the book, but let me just say... it's not only hot, but it punches home the point what Tess means to Brock.  It's early on in the book but the connection these two have is strong and it's beyond special.... it's meant to be!

But Brock and Tess still have some major obstacles they have to dodge in order for life to turn normal for them.... they both come with ex's that would probably make your ex seem like a saint.. well maybe not but you may feel that way if you had to deal with not only Tessa's douchebag ex-husband but also Brocks major bitch of an ex-wife.... and I mean that in capitol shouty letters because it's unreal how these two act, what they say, and how they actually believe that they will end up getting their way.  The situations these two have to face not only together but also alone would make you  think that one of them would want to throw in the towel and just give up because there is just so much baggage there... but they don't.  They stick by each other.

Brock helps Tessa become whole again and Tessa helps Brock see that how his past played out was not his fault and even though he can not fix it, he can do his best to make the future that much better.  It was sweet how these two are with each other, it touched my heart, and it made me smile like a crazy woman when they admitted their feelings... especially when Brock tells Tess just HOW much she means to him.

"McManus said he started with a good one and I was lucky I was ending with one and he was not fuckin' wrong."

Both my hands moved to either side of his face and I begged, "Please, Brock, be quiet."

"No fuckin' way, baby," he whispered.  "Today, I been thinkin' a lot about McManus and he lost his good one and there is now ay I'm gonna find mine and not know right to my fuckin' bones she doesn't understand precisely what she means to me."


The best thing about this book... other than the fact that Brock is hot as hell.... is that Tessa did not really have the insecurity issues that most heroines have.  Sure she took a blow when she found out that she met Brock under false pretenses but when he laid it all out for her and let her know how much he wanted her in his life she went with it... she enjoyed every minute of it, and other than a few doubts because of uncontrollable situations she had the confidence of a woman who is well loved.... and that made me love her character even more.

Totally off topic of the beautiful romance between Brock and Tess but totally related to this book I have to share a quote from Laura (Brock's sister) talking about having a sleep over.  Now my daughter has yet to have a sleep over but believe me we have had the all day play-dates with little 4 and 5 year olds running all over and when I read this quote I seriously about choked on my tea.  It's so true and even though I have felt this way in the past and I'm sure will feel this way again in the future I can't help but laugh at the reality of Laura's thoughts.....

"Remind me never but never to do this again.  I knew it, I've done it before but, like childbirth, you forget how freaking painful it is in between times and therefore convince yourself you're good for another go."

One More quote to share and I'm sharing this because I know A LOT of you will get a kick out of it for numerous reasons....

"I have not spend decades being relatively successful in a boardroom only to get played by an out of the bottle, forty-four year old blonde who doesn't know the difference of the uses of 'their', 'they're', and 'there'"

☆ On a side note that has absolutely nothing to do with the story I have to share that Saturday was my daughter's 6th birthday and she says to me:


G: "Mom, I want a rainbow cake for my birthday because rainbows are the best."

G: "No, Mommy... I want YOU to make me a rainbow cake because your cakes are the best." 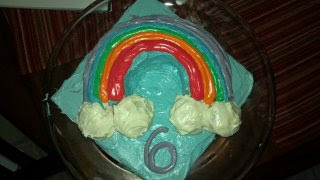 How could I say no to that?  So of course I made my beautiful 6 year old a rainbow cake... Unfortunately when I went to get started I realized my cake sheet pan was in the fridge currently being used by left over meat...(which now means I need to go buy a NEW sheet cake pan because... eww! big thanks to my husband for that .. Men!) so what choice did I have?  I had to channel my inner Tess and get creative and here is what I came up with.  Needless to say the cake was a HUGE hit!

by Kristen Ashley is yet another reason on exactly WHY I absolutely adore this author.  KA has got a talent that is so superb that no matter what I have going on in my life I can not help but become consumed by her writing... I know I'm preaching to the choir here because you've all heard me go on and on about my love of KA and her alpha men so I'll keep it at that especially since I've got 3 more KA books I plan to read and review over the next couple of days :)  Check out the Dream Man Series... starting with Mystery Man (Check out the review ).  Up next is Law Man and let me tell you I plan to enjoy the time I'm going to be spending with Mitch Lawson....