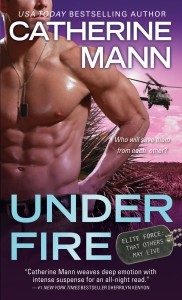 Book description...
No Holds Barred, In Love or War...
A decorated hero, pararescueman Liam McCabe lives to serve. Six months ago, her and Rachel Flores met in the horrific aftermath of an earthquake in the Bahamas. They were tempted by an explosive attraction, but then they parted ways. Still, Liam has thought about Rachel every day—and night—since.
Now, after ignoring all his phone calls for six month, Rachel has turned up on base with a wild story about a high–ranking military traitor. She claims no one but Liam can help her—and she won't trust anyone else.
With nothing but her word and the testimony of a discharged military cop to go on, Liam would be insane to risk his career—even his life— to help a woman who left him in the dust.

Now take just a second to admire that Cover.... nice huh?  Not sure how she does it but Catherine Mann always seems to have these amazing covers with these gorgeous men that just make you want to stare all day.... or at least come back to look periodically throughout the book

It's never been a secret that I absolutely love a man in a uniform... especially military uniforms... My nephew (who happens to in Medic School for the US Army) and I were just talking the other day, I can't exactly say what we were talking about because I do have family members who sometimes decide they're cool enough to read my reviews, but I can say that it has to do with Military men wearing their dress uniforms....


Me: "Obviously I'm not saying this about you because that's just gross but... a man in a uniform is freaking hot."

Me: "No really, ask my friends, ask just about any woman... and they will totally agree with me."

S: "It's okay I'll take your word for it,  mostly because I just want you to quit talking about men in uniforms."


He thinks I'm a goof and doesn't hesitate to tell me so... while he's LOL'ing,  but he loves me and even though we drive each other nuts (because there is only 10 years age difference) we're very close.  He knows he can come to me with anything and no matter what I'll be there for him....

Okay so you're probably sitting there thinking.... Why in the world am I reading about Lori and her nephew when I thought I was going to read a book review? ... yeah well I'm getting there.....

Liam, who by the way, is super hot and just so absolutely loveable... reminds me of my nephew.... well minus the hot part because to me my nephew is still a little kid who I used as a pawn to get out of being grounded.... He's lovable, he's extremely loyal, and most of all he just wants someone to love him back the same way, someone who will be there for him when he gets done for the day or home from a mission.  Poor Liam has been married and divorced 3 times.... and as much as I want to laugh about that... I won't because I can only imagine how lonely it is for our Service Men and Women who are "unattached".   He has loved all of his ex-wives to the point that every divorce hurt but he's never felt the unconditional love and happiness he feels when he's around Rachel.

She was everything he'd ever wanted in a woman.  He may have fallen in love easily in the past, but damned if he could remember ever falling this hard.

I can't even begin to describe how much I absolutely LOVED Rachel... she was exactly the type of heroine I love to read about... She's strong, in complete control of her emotions.  She loves deep, she's loyal, and she is one of the most compassionate and caring women. I wholeheartedly loved being in Rachel's head.... especially when she put a drunk man in his place and then even more so when she took Liam's back for the first time... here they are in the middle of something really hot and heavy only to get interrupted and accused of something illegal, and then out of no where Rachel finds her wits and totally gets her and Liam completely out of the mess... It. Was. Awesome!!!!  Oh, and it was hilarious!!!

So Liam and Rachel have a bit of trouble following them, well mostly following Rachel... but now it's up to Liam to keep her safe until he can figure out exactly what is going on and who exactly to believe.  The best thing about Liam was he knew deep down that Rachel was innocent, that her fiercely loyal personality is what pulled her into this mess with a Military Cop with PTSD.. but he's determined to get to the bottom of it, even if that means going off radar and taking two of his team members with him.

One amazing thing about Catherine's books are she does a fantastic job with switching POV's.  Normally I get frustrated with more than two or three POV's in a book.... but Catherine always pulls it off phenomenally!   So with that being said..... I have to admit how much I absolutely adored the secondary love story going on in Under Fire..... Brandon (The Military Cop that Rachel was helping) is so sweet, I just wanted to wrap my arms around him and give him a big hug.  Catriona is an extremely shy woman who is a little hung up in the past when it comes to wanting to know if Brandon would have looked over her or not... but she's still super sweet and deserving of the love she believes Brandon is capable of giving her.  The only thing I didn't care for in the switching POV's was the "villain".... but that's just me, I personally like to keep guessing who the bad guy is and having his POV just kind of gives it away for me.

by Catherine Mann is yet another amazing Military- Romantic Suspense novel that kept me on the edge of my seat and anxious to not only find out what would happen between Liam and Rachel but also what would happen to them if they were caught by the backstabber..... and then there was also the secondary romance that I kept wanting to know more about as well....  Definitely a good read but then again Catherine does a wonderful job a providing some wonderful novels with those hot as hell men who just happen to also wear uniforms