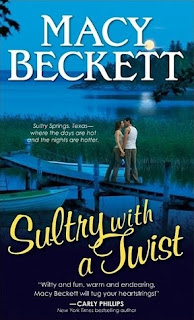 Sultry with a Twist


Book description…
When Mae-June July Augustine hightailed it out of Sultry Springs, Texas, with her heart in pieces, she swore she'd never return. But nine years later, one thing stands between June and her dream of opening an upscale martini bar: a month of community service under the supervision of the devilishly sexy Luke Gallagher, her first love and ex-best friend. As lust turns to love, June must decide where she belongs: in the glorious anonymity of Austin or back in Sultry Springs with the man who intoxicates her like no other.

I have to say that I was pleasantly surprised with this book… I wasn’t quite sure what to expect based on the book description but I decided to go ahead and take a shot because I seem to have a soft spot for friends turned lovers’ stories.  But this one was a little different and even though there were a few places where I struggled with my feelings about the hero and heroine, something ended up happening and my thoughts of HEA’s and sweet words of love would return.

June… poor girl, in all reality she had the worst name ever!  Mae-June July?  Really?  What she lacked in a good name the woman made up for in personality.  She had a sharp tongue that she hardly ever bit to keep quiet but yet she had this sweet and sensitive side that warmed my heart.  Having to return home to Sultry Springs to complete community service was hell on June… for a few reasons.   She was in the process of opening her dream, her beautiful bar that was scheduled to open just 6 weeks before she had to return home for this so called community service,  She had to live with her grandmother, who she has not spoken to in years, and the worst thing of all was she had to do everything under the watchful eye of her first love… Luke.

Now Luke… I kind of ran hot and cold right along with him.  Yeah, he was hot and said some extremely sexy things, but he was also a jerk when he was trying to push someone away or he was told something he didn’t want to hear.   Then there is this other side of him… the real side of him that just melted my heart.  He’s former Army… and we all know how close the US Army is to my heart since my nephew is currently enlisted… and now Luke runs a nonprofit company that helps those in financial need of fixing their homes after disasters.  He’s compassionate to a fault… but it’s a compassion that you see in his actions instead of words.  He has the sweetest nickname for June, and even though he refuses to admit to believing in love or ever being able to love someone… it’s so easy to see his true feelings for June and how deep they actually run.

Their relationship is kind of all over the place.  At first neither of them is very happy to see the other but things start to change and they actually start to get along… somewhat.  The emotions in both Luke and June change so suddenly that one minute I was thinking they’d make an adorable couple and then 30 seconds later I’m thinking they’re doomed.  They both know how to push each other’s buttons.  But behind the unpredictable emotions there is so much passion that I’m still amazed that these two were able to hold off as long as they did.

Sultry with a Twist

by Macy Beckett is definitely one to check out. Macy’s writing style pulled me in and kept me wanting more of June and Luke after I read the last page. I definitely look forward to reading more of her work!

Happy Reading!
Posted by Lori at 9:00 AM