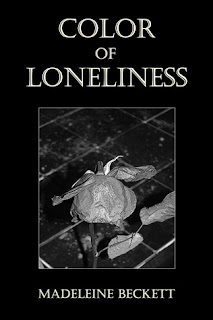 Color of Loneliness by Madeleine Beckett

Book description...
Myra Sommers, an attractive young copy editor living in Philadelphia, makes the tough decision to return to her family home in Nyssa, Oregon. A recent death leaves her with no remaining family, and she decides to heal and regroup there. Her decision to leave is solidified by recent revelations involving her cheating ex-boyfriend, Trent.
Myra parts ways with her only friend, Susie O’Connor, a zany woman who’s more than a little insane. In Nyssa, Myra finds little immediate comfort in her “new” home which is literally falling apart around her. She sinks into a deep depression, exacerbated by her feelings of loneliness and isolation in the small town.
News of Myra’s return takes no time to spread through Nyssa, and she quickly encounters several locals, some friendly, some not. Among the friendly faces is Jim, an elderly neighbor whom she begins to rely on for help and companionship. When she realizes that she’s going to have to hire someone to do repairs on her broken-down home, Jim gives her the name of a local contractor, Dylan Lawson, who has done work for him in the past.
When Myra calls Dylan for an estimate, she’s astounded by the contractor’s gruff, surly demeanor. But she trusts Jim and there are few other options in the small town.
Dylan can’t help but notice that Myra is young, single, and beautiful, which makes him suspicious of her real reason for calling him. The women in Nyssa pursue him relentlessly but he’s not in the least bit interested.
After Myra approves his estimate, Dylan begins the process of repairing her home. While he works, she begins writing a book; that is, when she’s not fielding insane calls from Susie who misses her like crazy.
Slowly, a reluctant friendship develops between the pair, followed by romantic feelings which neither of them can fight. However, their painful past experiences threaten to tear them apart. Can they move beyond their despair and open their hearts to love?

First of all I'd like to thank Madeleine for gifting me a copy of her book in exchange for an honest review!  I wasn't exactly sure what I was going to get when I started the book because in the description Dylan just comes off as such a jerk and he is... but he's not... I know, I make no sense... just bare with me while I get through my thoughts here!

The story itself was a little difficult to get into because it started off slow but there was still something there that kept me going and then when I finally did get there I seriously couldn't put it down... it was another one of those stories where I was stirring dinner on the stove with one hand and holding my kindle in the other... and I may have - okay I did - overcook the macaroni a little!  Oops!

Myra is one of those characters that you instantly feel for, she hasn't had the greatest luck and believe me she deserves love and happiness like there is no tomorrow.  She is sweet as pie and innocent in a way that makes you want to protect her from everything that happens in her life.  Since moving back home to Nyssa, after finding out some devastating news about her ex-boyfriend, everything that could possibly go wrong with her house... does... and she's forced to hire a contractor to fix and fix up her home.

Dylan... I don't even know where to begin with him, other than I seriously did not like him at first.  In all honesty it took me a little while to even warm up to him... but once I did... I was curious, I was anxious, and I was happy!  I wanted to know more about him, I was anxious to find out why he is so mean towards everyone, and I was more than happy to start seeing him happy!  But then he did something to confuse me... actually he did something that kind of made me mad and in all honesty I'm praying that it's one of those "looks are deceiving" kind of situations.  But I guess I won't know until Color of Forgiveness is released hopefully around the first of the year.

This is definitely a book worth checking out but just remember it does start off slow so in the words of some of my favorite book friends "Keep Reading"  you won't be sorry!

Happy Reading!
Posted by Lori at 3:30 AM