Cover Reveal: Play With Me by Kristen Proby


Okay Kristen Proby fan’s HOW excited are you for the release of her next book… Play With Me?
I am!!!
Check out this absolutely GORGEOUS Cover and mark your Goodreads lists for the expected release date of March 1, 2013!!!! 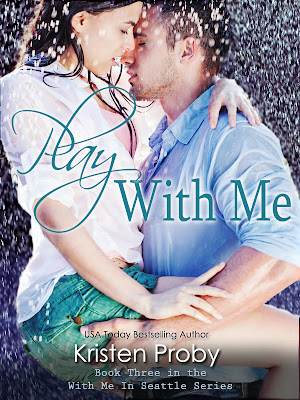 Will Montgomery is a successful professional football player and seemingly has it all. He’s not used to being told no, and certainly doesn’t take no for an answer. So when he turns his charms on his sister’s sexy rocker-chick friend Meg, he’s not only turned down, but met with open hostility, piquing his curiosity and libido. He’s determined to show her that he’s not the arrogant jock she thinks he is, and to get her into his bed.

Megan McBride is not impressed with Will Montgomery, his fat contract, fancy car, or his arrogant public persona. She doesn’t have time for a relationship, and if she’s learned anything in life, it’s that loving means losing, so she guards her heart ferociously. But she can’t deny the overwhelming attraction to the sexy, tattooed athlete, and when Will starts breaking down her defenses and grabs hold of her heart, will she be able to admit her feelings for him, or will her troubled past cause her to lose the first man she’s ever truly loved?

Play With Me is the third book in the With Me In Seattle Series.