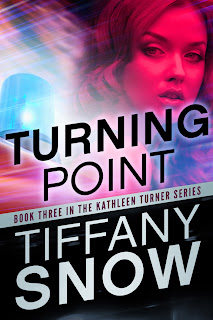 For those of you who have not started this series yet… OMG what are you waiting for?  These books are amazing.  They’re captivating in every sense… you’ve got your love triangle and every girl has her “dream boy” – Mine is Kade -  Then there is this keep you on your toes mystery to figure out with loads of suspense thrown in… To top it all off Tiffany Snow has this ability to write all this with an amazing flow that leave you craving more once you’ve finished.   I’ve reviewed the first two books… Check them out – No Turning Back (Book 1) and Turn To Me (Book 2).  My review for the third book Turning Point will be at the end of this post!

Thank you to Lori’s Book Blog for hosting me on the blog tour for TURNING POINT, the third book in The Kathleen Turner Series. There will be a total of five books in the series. Book four, OUT OF TURN, will be released on 12/17/13.

Lori asked me what is my favorite Kathleen Turner scene. That’s a difficult question to answer without sounding self-aggrandizing, so I hope it doesn’t come across that way. J
My favorite scenes are usually those in which we get to see Blane and Kade interact. Since the books are told from Kathleen’s perspective, we only get to see Blane and Kade together when Kathleen is there, too, which makes for an interesting dynamic, especially the further in the series you read.

Blane and Kade are brothers that have a complex history. Kade is the product of Blane’s father’s infidelity, and Blane knew nothing of Kade’s existence until he was a teen. Kade’s mother died when he was very young and his father refused to take him in, leaving Kade to the dubious protection of the Department of Family Services. Running away from foster homes and living on and off the streets to survive consumed Kade’s existence until Blane’s father died when he was eighteen. At that time, Blane searched for and found Kade, taking him in and becoming his legal guardian. Despite Kade’s attempts to push Blane away, running away from home and in trouble with the law as a juvenile, Blane persisted and they forged a strong bond of love and loyalty.

That loyalty and their relationship are tested in The Kathleen Turner Series. When two brothers fall in love with the same woman, what does that do to their relationship with each other? Does it change and adapt to survive, or does it break? Those are the kinds of questions I explore in the series and with these characters which is why every scene I write with both Kade and Blane is so fun for me. Those scenes are few and far between, so a lot has to be conveyed in a short time frame, so it’s a challenge as well, but hopefully one I can live up to and that my readers enjoy.

Big thanks and hugs to Tiffany for stopping by today!!!!

Okay so I have to ask y’all… well at least those of you who’ve read the first two books and even those of you who haven’t…. Do you think that when Tiffany says she likes the interaction between Blane and Kade that she intends to tease us all more?  Maybe play a little more cat and mouse?

As for Turning Point… HOLY HELL book lovers – all I can say is that was one heck of an emotional ride!  Tiffany Snow is one Author that knows how to take your emotions on a journey that will have you smiling, laughing, crying, and itching to slap someone all at the same time and I seriously can’t wait for more!

Kathleen had some things to figure out in this book that not only broke my heart but made me love her independence and self worth even more.  She is one determined woman and she is determined to make sure everything that is done is done for a reason and she is there to stick up for those who deserve it.  But the biggest decision she had to make made me cry… like serious fat tears rolling down my cheeks and then came that sense of revenge that I seriously hope she is able to get in Out of Turn!

I can’t even begin to describe my feelings towards both Blane and Kade in Turning Point because not only will I start ranting and then end up giving away too much but also because I have to say that BOTH men made me so angry at different points that I almost wished for a third man to come in and sweep Kathleen off her feet so these “boys” would get their act together and realize what a wonderful, loving, and deeply loyal woman they have in their life… not that they don’t… because they do… but they’re both so quick to jump on that trigger before they even listen to reason or realize how badly their words hurt.

In the end, I know that Kathleen will get what she deserves and that woman deserves nothing but the best… I hope it’s Kade because well… he’s Kade…

“I look in your eyes and see my soul written there.”

“You smell like home,” he replied, his voice a rough whisper in my ear.”

I have my reasons for wanting her with the brother that she’s not actually with and I think I’ll keep them to myself but I also can’t deny the fact that I have mentioned to Tiffany (as well as many others) that I secretly wish they’d all just say “the hell with it” and live as one happy three-some!  Sure, as one of my readers friends mentioned… that will turn this series into an entirely different kind of book… but think about it.  If Kathleen was with BOTH Blane and Kade, not only would she NOT have to chose but she’d also get the best of both worlds.  And trust me, what one brother lacks, the other totally makes up for ;-)

Please once you’ve read and finished Turning Point… message me on Facebook, twitter, send me an email… I don’t care but message me and tell me what do you see happening in Out of Turn!

Giveaways:  (Yes I said GIVEAWAYS as in plural… like I think that Kathleen, Blane, and Kade should live)…   Enter the first rafflecopter for a chance to win a kindle copy or a print copy (print copy is only available for US residents) of one of Tiffany’s Kathleen Turner Books.  Enter the second rafflecopter for your chance to win a Kindle Paperwhite or HD.  Good LUCK!!!!