If You Stay (Beautifully Broken #1) Review 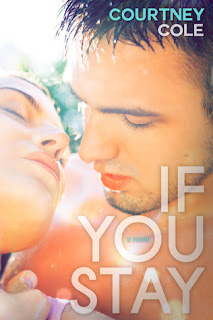 If You Stay by Courtney Cole

Book description…
24-year old Pax Tate is an asshole.
Seriously.
He’s a tattooed, rock-hard bad-boy with a bad attitude to match.
But he’s got his reasons.
His mother died when Pax was seven, leaving a hole in his heart filled with guilt although he doesn’t understand why. What he does know is that he and his dad are left alone and with more issues than they can count.
As Pax grew up, he tried to be the kid his father always wanted; the perfect golden boy, but it didn’t work. His dad couldn’t overcome his grief long enough to notice and Pax couldn’t keep up the impossible perfect façade.
So he slipped far, far from it.
Now, he uses drugs and women to cope with the ugliness, the black void that he doesn’t want to deal with. If he pretends that the emptiness isn’t there, then it isn’t, right?
Wrong.
And it’s never more apparent than when he meets Mila.
Sweet, beautiful Mila Hill is the fresh air to his hardened frown, the beauty to his ugly heart. He doesn’t know how to not hurt her, but he quickly realizes that he’s got to figure it out because he needs her to breathe.
When memories of his mother’s death resurface from where he’s repressed them for so long, Mila is there to catch him when the guilt starts making sense. Mila is the one…the one who can save him from his broken troubled heart; from his issues, from the emptiness.
But only if he can stop being an asshole long enough to allow it.
He knows that. And he’s working on it.
But is that enough to make her stay?

This is one of those books that you read and constantly find yourself thinking “OMG did that really just happen?”  After reading Confessions of an Alli Cat last winter, I knew that Courtney was going to be another favorite of mine… little did I know she would put out a story like this one - A story that gripped my heart and held strong for days after finishing… a story that I connected with on such a personal level that my respect level for Courtney as an author has skyrocketed.

Mila is one of those heroines that you can’t help but just fall in love with.  She’s perfect in the sense that she’s not perfect but then again she is… I’m thinking that will only make sense to me – She’s got a big heart and so much love to give.  She’s loyal and extremely compassionate, even when she shouldn’t be.  So when it came time for her to make a decision I couldn’t help but understand why she chose to make the one she did… I got it, I didn’t like it, but I definitely got it.

Now Pax is a different story; he is the reason my respect level for Courtney has blown through the roof because the way he is writing is so fantastically written!  Pax uses drugs… These scenes with the drugs (ALL the scenes) were written so realistically that I cried.  I lost someone I love to addiction almost four years ago… so I saw firsthand what addiction (drugs, alcohol, numbness, blackness, whatever that addiction may be!) does to a person and Courtney wrote those scenes in a way that most authors do not!  It was believable and extremely heartbreaking.

Pax was incredibly sweet to Mila and he wanted to be a better person because of her… he even wanted to face things he’s been avoiding most of his life so he could be that better person he so desperately wanted to be.  But he had issues that needed to be faced and let me tell you those issues – well when the truth came out I understood his addiction even more.

There is so much that I could go on and on about with this book, but I’m not going to because If You Stay is a MUST read this year… Seriously!