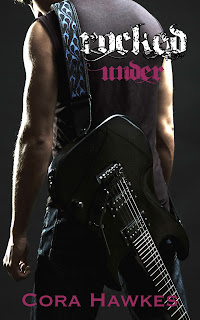 Rocked Under by Cora Hawkes


Falling in love isn't always easy or pleasant. The intense and angst-filled story of Emma and Scott is a painful, gut-wrenching and exhausting portrayal of how hard it can be to let go...

Nineteen year-old Emma Harrington’s number one rule is; Never give your heart away to a man, no matter what. That lesson was learned early on in her life and she will never forget it.

Starting over in the USA, Emma starts college with her cousin, Ashley. She is finally free to do and live how she wants and no man will ever rule her decisions or emotions again.

That is until Scott Mason walks on stage…

Intense, bad boy Scott is the lead singer in a local and popular rock band. Ladies man and Ashley’s longtime friend, Emma is instantly drawn to him, even though he is everything she hates and needs to stay away from in a guy. He treats females like he does a cigarette; light it, use it, and lose it.

For her cousin’s sake, she makes an effort to get along with Scott. She soon discovers that there is more to Scott which makes him even more dangerous in her eyes. Underneath the façade of friendship; jealousy, obsession, fear and insecurities, fester and battle it out as she fights her attraction and history from repeating itself.

One thing she knows for sure is that if she breaks her rule, it may destroy her.

Cora Hawkes lives in England with her man and their four children. She thinks the kindle is the greatest invention ever and hers is mostly filled with paranormal and fantasy romances. Favourite books are Kresley Cole's IAD series, Jennifer Armentrout's Covenant series and Heather killough-Walden's The Chosen Soul series.
Apart from family-time, reading and writing, she LOVES music and going to gigs. She hates soaps and rarely watches TV but loves The Vampire Diaries, True Blood and Gossip Girl.

Review:
So I’m going to be extremely honest here…. I could not for the life of me put this book down.  Even being sick with one of those stupid chest colds, having to deal with stupid gallbladder problems, and having screaming kids in the background somewhere… I was unable to focus on anything BUT Emma and Scott!  I’ll tell you what… Cora Hawkes sucked me in with this story and I’m still waiting to be spit back out!

So… as I said, I couldn’t put it down.  I read the entire book from start to finish in one sitting, only pausing to let the puppy outside, feed the kids, answer the phone when hubby called, and being annoyed by having to do all said things because I didn’t want the interruption.  BUT – these characters frustrated the ever living heck out of me.  I wanted to grab both of them by the backs of their shirts, shove them in a locked room, force them to sit down, and not let them out until they learned the meaning of the word – Communication!

Here’s the deal – she loved him, he loves her – she refuses to let him know she loves him, he refuses to let her know he loves her… and on and on.   The thing that kills me is I’ve read countless reviews on this book (Yes I do read reviews before I read books if they are out there because I want spoilers!  LOL) and tons of readers have said they wanted to smack Emma for her being so unwilling to take a risk…. Here is how I feel -  Yes, I wanted to smack Emma countless times but not for the same reasons other readers are saying, part of it is because she is unwilling to take the risk but I really wanted to smack her for the numerous stupid decisions she made and for the people she strung along the way – sure one of those people turned out to be a POS but she still strung them along before their true colors were revealed.  Now as far as wanting to smack her for taking a risk… I did but I didn’t.  I got it.  She needed to take the risk with true love but in all reality Scott did not once show her that he was willing to go the distance with her and instead proved to her that he probably would break her heart and put her through the same rollercoaster her Mom went through.  So yeah, I got it and I felt for her!

As much as this book frustrated me it’s definitely one that has my attention long after reading “To be continued” and I’m more than looking forward to reading the next book in the series to see what will happen to Scott and Emma… Will they make it?  Will they be able to put the trust into each other that their relationship so desperately needs?  Will they quit hurting each other?  I pray that all my questions plus more are answered in the next book!!!

I had never picked up a guitar in my life — and it showed. Scott handed me a beautiful, black acoustic guitar. I didn't even know how to hold it but I tried my best, and at least Scott was smiling again, which is what I had aimed for.
He chuckled and moved his hand down over his face to try to hide his amusement. "You don't hold it like that…Here…”
I was sitting on the edge of a big footstool and he came to sit behind me. He shifted forwards until I was sitting between his hard, warm thighs. I was so aware of him that I froze. I didn't dare move. He came closer and put his arms around me to reach the guitar. His naked chest came into contact with my back, making my core temperature rise to dangerous levels. His scent was enveloping me, taunting me, and this time there was no escape.
His head peered over my shoulder causing the hairs on the back of my neck to  stand on end.
"Hold it like this," he whispered close to my ear as he moved my hand into the right position.
His breath tickled me, making a shudder run down my back.
He paused for a second and I thought he had noticed. "And if you," he slid his hot hand under my thigh gently and lifted it for me until only my toes were touching the floor, "raise your knee, you can rest it here."
"Okay,” I whispered. It was all I was capable of saying with his hands all over me. Maybe this wasn't such a good idea.
He took his hands away and rested them on my thighs. "Now try." His voice was gruff.
I started playing but my mind was focused on the parts of my body that he was touching. I was dreadful. He was just so there that I couldn't have concentrated if my life had depended on it.
He turned his face towards my neck and I heard him inhale through his nose gently. His grip on my thighs tightened as he shifted closer to my backside and his forehead hit my shoulder heavily.
Shit! I'm going to spontaneously combust any goddamn bloody minute now if he doesn't stop.

Giveaway:
2 Grand Prize Packs: Signed copies of Rocked Under, a wristband, a signed postcard, and a mug.
5 Ebook copies.
Enter the Rafflecopter below


a Rafflecopter giveaway
Posted by Lori at 2:00 AM