by Jeaniene Frost is another fabulous addition to the heart pounding Night Huntress Series. 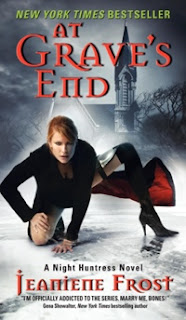 It should be the best time of half-vampire Cat Crawfield's life. With her undead lover Bones at her side, she's successfully protected mortals from the rogue undead. But though Cat's worn disguise after disguise to keep her true identity a secret from the brazen bloodsuckers, her cover's finally been blown, placing her in terrible danger.
As if that wasn't enough, a woman from Bones's past is determined to bury him once and for all. Caught in the crosshairs of a vengeful vamp, yet determined to help Bones stop a lethal magic from being unleashed, Cat's about to learn the true meaning of bad blood. And the tricks she's learned as a special agent won't help her. She will need to fully embrace her vampire instincts in order to save herself—and Bones—from a fate worse than the grave.

I honestly wasn't sure what to expect with this book because now Cat and Bones are married... at least in the vampire way.... and I have to admit I was pleasantly surprised that the only problems they seemed to have were small ones that just needed a little silent treatment here and there or actually talking it out... which is something our adorable couple had never been too good at in the past.  Their love for each other is solid.... finally after all these years.

When it comes to my review I have to admit I'm kind of at a loss of what I want to say.  I really can't go on about the love between Cat and Bones because... well this book seemed to be more of a suspenseful novel than a romantic one, now that does not mean that you don't see and feel the love between Cat and Bones... especially at one point where.... oops, so not gonna tell.... it's too much for me to give away but I will tell you I was in tears, I mean rolling down my cheeks, heart racing, breathing a little faster tears.  Fortunately there are still those amazing secondary characters... and even some awesome new ones... that Jeaniene has given us that make that pain just a little better and help shed some light on what now needs to be done... at least until that pain is healed.

As with the previous two Night Huntress books there is still that hilarious sarcastic humor throughout the book.... Cat as always is quite the smart ass and that includes in her thoughts which is even better in this book considering Bones can now read her mind as well as two other characters.

Okay so remember how much of a bitch her Mom was when it came to her relationship with Bones or any vampire for that matter?.... yeah well... let's just say that Justina is definitely putting her foot in her mouth in this book and boy was it worth it to read.... priceless definitely priceless ;)

The one thing I want to complain about is Annette... I do NOT like her, I don't care what Cat says about her and how she feels a little compassion but I do NOT like her.  I do not like how she feels she is entitled to say and do as she pleases to Bones, I do not like how she continues to confess her love for him to Cat... I just do not like her and all I can say is that Cat is a way better woman than I cause I can tell ya right now there is NO WAY I'd be putting up with any of that shit no matter what the circumstances were....

was a great addition to the Night Huntress Series.  I am so engrossed in the love between Cat and Bones and can't wait to find out what happens next, not only between them but also with all the amazing secondary characters that I'm considering giving myself a weekend Night Huntress Marathon....  Make sure you check out this series... the love, the suspense, the heartbreak, the friendships.... it's all amazing and will have you wanting more!!!