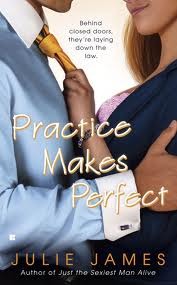 Book description....
When it comes to the laws of attraction, there are no rules The battle between the sexes is about to make these two lawyers hot under the collar. Opposites collide when two lawyers try to make partner at the same firm. Payton Kendall is a feminist to the bone. Cocky J.D. Jameson was born privileged. But when they're asked to join forces on a major case, they gain a newfound awareness of each other's personal assets. The partnership spot will be offered to only one of them, though. The competition heats up. Sparks fly. Let the games begin.

I have to say that I really enjoyed these characters but then again I absolutely LOVE sarcastic humor and Julie James KNOWS how to write sarcastic humor.

Payton and J.D. have worked together at the same Law firm for the past 8 years and have not gotten along since their first week.  They have a way of... let's say bringing out the best in each other... that makes you want to smack both of them upside the head and say... will you just kiss already?... but it's hilarious, their quit wit had me cracking up constantly and praising Julie for her awesome sarcasm skills.

Since they're both in their eighth year they're up to either go up or get out and both have their hearts set on becoming a partner at the firm.  They're both litigators but specialize in different field areas so they've never worked together... until now.  A huge class action law suit has been filed against a large company by it's employees... therefore, both Payton and J.D. are needed to help out due to their specialties.

It was amusing to see them forced to work together because at one point the potential client wants them to talk about each other and since they don't exactly get along....  Anyway, together they do a great job of wooing this potential client and are congratulated for their big hook as well as informed that there will only be one partner named this year which means... they are now each others competition..... and this is when it gets good and I mean hilarious.... The sexual tension is so thick already but yet.... it gets even thicker.

A little accident/misunderstanding/on purpose kind thing happens and so the war begins.... Okay so I don't want to give any of this away because this is seriously what made the book for me.  I mean I was laughing so hard I had tears rolling down my face and my belly was all cramped up... What Payton does to J.D.... funny, but what made it better was what happened later that day.  Then what J.D. does to Payton... that was just mean, come on you never mess with a woman's... yep so not giving it away... but when that something 'happened' to her... well, I lost it, I mean busted up laughing and best of all was her recovery.... That. Was. Amazeballs.... I mean like totally freaking awesome!  Then J.D. finds himself in a bit of a jam and no one to help, he specifically tells his secretary NOT to mention it to Payton... but of course she finds out and ends up having to 'help out'.  Now here is where it got interesting... because J.D. flips out before he can even find out what went down and ends up having to eat his words and apologize to Payton.

Before his apology I was ready to jump in the book and shove the two of them together but after.... well let's just say I was a little satisfied and then I was rolling my eyes thinking... damn lawyers need to quit thinking for once and go with their initial feelings instead of trying to break every thing down!  Needless to say things didn't get far... at all... other than to stir up some more sexual tension and have them both questioning their feelings for each other.... and then it seems like they're back to where they started but... less.  They aren't not getting along they just aren't speaking... avoiding each other to be exact until their boss informs them of an upcoming trip he needs them to take just days before the announcement of who will be named partner.

Things get... a little, no... a lot heated while out of town and that's just at the dinner table with the client ;).  Obviously some talking and.... ummm... other stuff...ya know... fun stuff is done and they both decide to extend their stay together one more day.  Things are passionate between Payton and J.D., they're still fun because these two still throw around the sarcasm...if it's not obvious right now, I get a total kick of  sarcastic humor... Anyway, when it's time to go home both feel that dread... that kind of dread like "it's been real and I don't want it to end but I don't know how you feel about this whole situation because we never discussed what exactly we're doing here because neither of us really wants to admit what we're really feeling because we're both too scared" kind thing... wow I really just rambled on that one... So obviously things, again, end on a not so perfect note after J.D. tells Payton that he wants to be with her but she's too afraid of what how they will feel about each other when one of them is chosen and the other is left to start over again at another firm.

They have one day to wait before they find out who will be named partner and with the feelings that J.D. confessed to Payton, even though she's terrified of how she's going to feel about the partner decision she decides it's time to live her life for herself and seeks out J.D. to tell him what she wants. BUT... and here is where I had to roll my eyes at the same time I was shaking my head and thinking... Men!  Sometimes they just do not know when to keep their mouth shut.  Anyway... Payton is pissed and I mean pissed, which I don't blame her, I would have been too, I mean he seriously could have ruined..... so not gonna give it away.  So she decides she is done with him once and for all but what she doesn't know is that he is in love with her and doesn't plan to let her go.  He has a new plan.....

is an awesome quick witted, humorous, easy read that has me ready for more of Julie's creative writing style.  I've said it before and I'm sure I'll say it many times but there is nothing better than a book that can have me out right laughing so hard I get tears in my eyes.  I may not be able to compare my love for Julie's books like I can my addiction to Kristen Ashley books but I have to say that Julie has proven to me that I no longer need to read the synopsis before I hit the 1-click button on Amazon... with her it's an automatic now and considering I'm one of those readers who like to check out all the other reviews (mostly the 4stars and under) before I purchase a book... that is saying something huge.  There are only two... well now three authors that I will do that for.  So check out Julie's work... they're all great reads and all have that wonderful humor that keeps me coming back for more!