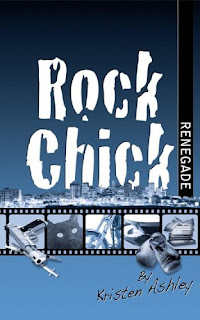 by Kristen Ashley.... is the forth book in the all consuming Rock Chick series and....Yes my fellow book lovers, we have yet another edge of your seat KA treat.

Book description...
Jules has got a score to settle against the drug dealers of Denver. Vance has made it his mission that Jules won’t get dead while dishing out vigilante justice. Jules doesn’t have time for romance, she’s too busy saving the world and she enlists Zip (the gunstore owner), Heavy (an ex-PI) and Frank (a mysterious recluse) to help.  The Rock Chicks of Fortnum’s Bookstore get involved to provide romantic advice and guidance, none of which Jules accepts at first. The Hot Bunch of Nightingale Investigations adopt Jules as one of their own. Even though Jules tries to hang on to her inner Head Crackin’ Mamma Jamma, the Rock Chicks; Hot Bunch; Jules’s long-suffering Uncle Nick; Jules’s friend the rotund, African-American, Jackie-O wannabe, May; and especially Vance will stop at nothing to wear her down.  But Jules makes some bad guys pretty angry and one is dedicated to taking her out. Vance and the Hot Bunch have to pull out all the stops to keep her alive. At the same time, Jules and Vance learn the true meaning of home but once they find this precious entity they’ve been searching for all their lives, will Jules’s enemies tear it away?

My KA addiction continues and since I've already taken that first step into admitting I have a problem... no wait, I don't have a problem because these books are awesome... they keep me properly entertained (just the way I like, I might add) and stimulate my brain in a very good way...

RC Renegade is a bit different from the first three RC books.... It's got a lot more action and the two main characters come with a different kind of emotional baggage... not to mention the secondary characters, as always, are amazing but there's more to some of these characters and I probably feel that way because... well... they're kids and they have a special connection with Jules.

I have to admit.... while Jules is not my favorite Rock Chick I still absolutely ♥ her and here's why... she has a heart of gold when it comes to her kids especially Roam and Sniff, I have a huge soft spot for anyone who puts forth the effort that Jules did when it came to her kids... that soft spot I have for her because of that turned into an even bigger soft spot because of how much she adored those two boys who had nothing.  She loved them and cared deeply about them... there is nothing that can take that away from her and for that Jules will always have a Rock Chick place in my heart.  Now... I also have to say that she was not like our typical Rock Chicks... she has that whole badass thing going on and personally that just doesn't do a whole lot for me because I like my heroines to be a bit on the girlie side who attract the attention of the hero because his alpha instincts take over and he feels the need to protect her... not because he chased after her because she had a face off with a drug dealer in the street while carrying a gun... Don't get me wrong, I still liked Jules, loved her even... but she is not my typical favorite kind of heroine... which makes me think back to a conversation my girls and I had about heroines and why we always want to smack them... which, yes I almost always want to smack them because... well, there's always a reason or it's just because LOL.  How often to you feel like smacking the heroine?

Sorry, sorry... I got a little off topic there but it still all goes hand in hand with how I felt for Jules.... So, Jules attracts the attention of one smokin hot Vance Crowe... This was the best I could find on the Vance visual... he's not exactly what I had in mind but close enough.  Vance is just... wow, what can I say about Vance... of course he's totally swoon worthy, he knows what he wants and goes for it, he's got an amazing use of words that will give you tingles, he's got the kind of past that makes you want to hug him and shower him with love, and most of all... the reason why Vance has a spot in my heart (yes I know again with the emotional stuff)... he has over come Alcoholism.... I lost my brother almost 3 years ago to alcoholism and because I grew up watching what he went through and watching him try to fight it my heart goes out... in a BIG way... to anyone who fights and wins that battle.  Okay back to Vance before I start crying and telling everyone my life story....  Vance knows what he wants and what he wants is Jules...

"This," he said, one hand dropping to my bottom and pulling my hips into his, one going up my back to press my torso to his chest, "is the sweetest thing I've had in my life and I  haven't even fucked you yet.  I never expected to get a chance at anything so sweet"

Like I said... he has a way with words.  They may not sound all that amazing now but once you read about his past, what he's been through... you'll totally get it and think... Oh Wow, how sweet is that!

So Jules and Vance begin the back and forth dance of him pursuing her and her trying to dodge and then break up with him, finally it seems like she got through to him.... which I can not keep my mouth shut about that... Are you kidding me??  Seriously, it's even obvious to you that the man adores you, he even admits to you being something important to him... and yet, you still push him back... What is wrong with you?... Okay... deep breaths... So, she pushes him away but what she doesn't understand is in no way is he done with her, he's just giving her the space she's not only asking for but he thinks she needs so she can work things out in her head.  Here again is where I got pissed at Jules.... I mean like PISSED!  You'll understand and I'm sure you'll get mad too... on a little side note and I will never admit to this again because well, I absolutely ♥ who he ends up with on a level that I've never felt for any character before but... you get a little taste of Luke.... the fictional love of my life... I can not wait to write my thoughts about his book... Now back to being pissed at Jules.... I also have to admit that I kind of forgave her just a tiny bit because she realized her feelings for Vance, she realized she was in love with him but had no clue what to do about it.

Fortunately for Jules, Vance came back around and they were able to talk about what happened.  Things are still intense for both Vance and Jules but not because of each other anymore... now they're just dealing with the bad guys... Some heart stopping things happen, like major heart pounding tears welled up in your eyes things and everything about Vance and Jules hangs by threads for a while.  They get their happily ever after but I am not afraid to tell you that I was worried... real worried that it wouldn't happen.

was a great addiction... I mean addition (See? I really should admit to having a problem) to the Rock Chick series... granted it was different because of the extra action and the fighting skills of our lovely heroine Jules but it was still great.  The only thing about this book that I have yet to decide how I feel about is Jules works with the hot bunch... it's almost like she becomes one of them instead of a Rock Chick because she trains with them, goes on patrol with them... I just can't wrap my head around how that makes me feel, on one hand I loved it because it gave me more of the Hot Bunch... and let's just say those boys can make anyone's day... but then again I didn't like it because... well..because when I read a book I put myself in the heroines shoes, almost like I make myself become her (silly I know but it's how my crazy mind seems to work *shrugs*) and with Jules and all her training and patroling I just could not do that, I couldn't connect with her like I typically do.  I still loved this book for many different reasons and I was still entirely consumed by KA's writing style but it was just in a different way... a good way.. but different.

Make sure you read the first three books in the series first... you will not be disappointed in any of them... obviously because this is Kristen's work we're talking about here!  Now I have to ask... How long do I have to wait before I begin my confession of undying love for Luke Stark in Rock Chick Revenge?