Games of the Heart (The 'Burg #4) Review 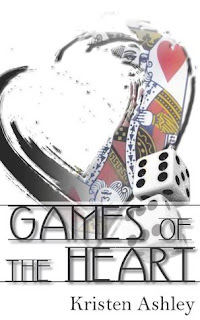 Games of the Heart (The 'Burg Series)

by Kristen Ashley was another great addition to the thrilling 'Burg Series... No need to compare it to something yummy considering that Stealth Mike it totally yummy by himself

Book description...
From the balcony of his house, Mike Haines can see the quiet, commonplace beauty of the Holliday farm. But what he remembers is the little sister of his high school girlfriend, Dusty who grew up there. As a teen, Dusty had gone off the rails but when she was a kid, she was sweet, she was funny and she had a special bond with Mike. But after high school, she took off and Mike never saw her again.  Then tragedy strikes Dusty's family, she comes back into town and Mike thinks she hasn't changed back to the sweet, funny girl he knew but instead continued to be selfish and thoughtless, leaving her family alone to deal with their mourning. So he seeks her out and confronts her in an effort to understand what went wrong and to force her to sort herself out.
He finds out quickly he's wrong about Dusty Holliday. Very wrong. And right after Mike discovers that, the bond they had years before snaps back into place in ways he would never suspect.
But Mike Haines had a bad marriage then he played games of the heart for a good woman. And lost. In order to protect himself and his kids, he's cautious, he's careful to read the signs and he's not interested in finding a woman he has to fix.
Then he learns what happened to Dusty and he thinks she needs to be fixed. He swings, he misses and in this new game of hearts, for Dusty, Mike just got strike three.


Dusty was awesome, she was a little more of an Alpha female than what I'm used to and it took a little while for that to actually grow on me but I have to say the straight forward personality of hers is something special, something most women can not bring to the table the way she did it.  I know a lot of straight forward women but I don't know many who still held the sweet and caring vibe when giving it to you straight like Dusty does.  I really liked her and my feelings towards her grew when she stepped up to do something HUGE for her family, granted it worked out in more ways then she could have hoped but still... She's the one who made the sacrifices, took the risks for her family.

There was just one little thing that bothered me about her... I just couldn't get over it, it bothered me every time I saw it but you know what?  No one is perfect right?  After I did a little complaining over it I asked myself..... "Lori... are you really going to be this petty to let one stupid little thing like that ruin the real image you have of Dusty?"  Then I said to myself (and yes I do converse with myself when I'm working out issues about my books, call me crazy but it helps LOL) "Nope, I'm not that petty of a person and Dusty is an awesome woman who deserves more credit than holding that one little thing over her head".... So there you go, that one little thing.... that, yes still bothers me... is NOT going to taint the wonderful character that Dusty actually is... the sweet, caring, straight forward, tell it like it is woman that captured the heart of Mike Haines.


Mike..... Stealth Mike..... sigh....  yep you got that right my lovelies, Stealth Mike from At Peace is back and hotter than ever and gives the definition of Alpha Male and even better meaning!!!!  Now it must be said that I kind of fell for Mike when he dated Violet and as much as I adored Joe because... well, he's Joe... I even cheered for Mike a little there but have to say that I'm so glad that Joe won that fight... Joe needed Vi and her girls like no one else and Mike ended up proving in this book that he was destined to be with Dusty.  She was too young for him back when they were kids but they had a bond an unbreakable bond that made their love for one another shine bright.

Okay... so my Mike visual, well I was on a google hunt this morning and struggled so I put my girls up to the challenge to find me a Mike that I could share with all of you and my girl Gitte (♥ ya gorgeous and Thank You for your help) found the goods but then again she has this uncanny ability to find amazing male visuals...  So back to Mike... he was amazing... like total amazeballs... except in the beginning.  He jumped to so many conclusions, which were understandable considering his past, but still... he should have given Dusty the benefit of the doubt, given her a chance to explain before he totally screwed it all up with strike three....

"No, Dusty.  I've loved you since you were twelve and I've read your diaries, you can't deny you felt the same fuckin' thing.  You weren't old enough then for my thoughts to go there but we both know that bond started then and we both know just how it changed when it snapped tight in that hotel room."


There is a lot more to that speech but that's all I'm giving away... Stealth Mike has got a way with words that will give you shivers in all the fun places and have you breathless for more.  He moves in and grabs hold of your heart before you ever realize he has a hold of it and he has a hold of it tight.  With his stealth ways and his heart stopping speech Mike gets Dusty back and let me tell you... wow, just.... wow!  They have got a beautiful relationship, she is everything he could have ever asked for and more because she is everything he needs.  She loves his kids, she doesn't play games with him, and she gives it all to him without wanting anything in return.

Mike and Dusty have their struggles which all come in the form of other people.... go figure.  Those struggles were mostly a big pain the behind... an ex-wife who finally decides to step up to the plate 4 years to late and a sister who tries to bring the family as low as possible at the worst possible time in their lives.  The hardest struggle.... yeah, all I'm going to say is Chapter 23... Black Day.... Keep your tissues ready!!!!

The best part of Games of the Heart was obviously Mike and Dusty and their growing relationship but we also get a huge treat in the form of a 17 year old Finley.... At times I thought... OMG Fin is totally stealing this show from Mike.  I hate to admit it but yes I was totally crushing on Fin and wondering if they made boys like him when I was 17.... but in my defense I know I wasn't the only one AND even though he was 17, he was an old soul.... he was more of a man then a lot of men I know and most of all he saw something special in Mike's daughter Reesee, knew he needed to treat her with complete care and he did... boy did he ever!  So as a bonus you not only get to see one relationship blossom into the most beautiful flower, you get to see two and instead of it being just one beautiful flower.... it's an entire field full of them.  Take my word for it, you don't want to miss it!


Games of the Heart (The 'Burg Series)

by Kristen Ashley was a great book.  I had a lot on my mind while I read this book so I wasn't completely in the perfect mind frame to enjoy it to my usual KA standards but I still thoroughly enjoyed this book.... I was still consumed by these characters and not just our main characters but our second beautiful blooming relationship as well....  As usual Kristen brought her A game with this book, she is a stellar author who deserves so much credit for her creativity and even more... her amazing speed at giving us fans these books quicker than we can blink!!!