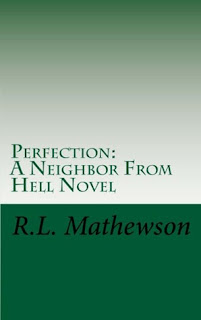 Perfection (A Neighbor From Hell)

Book description...
Zoe is used to taking care of herself and has long ago accepted that if anything bad was going to happen, it was going to happen to her. So when she loses her job over something most bosses would probably be happy with and her life starts going down hill from there she doesn't expect it to get any better. She certainly didn't expect any help from the loud jerk next door, but then again she has nothing to lose so puts her trust in him and hopes for the best. What she didn't expect was the once in a lifetime opportunity that he offers her through an arrangement where they both benefit and no one is supposed to get hurt, but she should have known better because her luck has never been that good.
Like most Bradfords, Trevor has a soft spot for food, but that's about all. He leads a pretty straightforward life and likes to keep things simple and that includes his relationships. He wants the perfect woman and knows exactly what she'll be like. So when he discovers much to his horror that he's thinking about his frumpy little neighbor he decides the best way to get his head straight is by working her out of his system. He'll keep her around, but only until he finds perfection.

I've said it before and I'll say it again R.L. Mathewson is hilarious.  This book cracked me up... I mean had me snorting, which may or may not be all that hard to do, but still... it was filled with humor and laughter is something everyone can use a little extra of.

Zoe is absolutely fantastic and I had a huge soft spot for her.  She is a typical woman, struggles with her weight and the diets she chooses to follow... but she's still sweet, even after having such a lonely past where she has been treated poorly.  She loses her job because her boss is an idiot and the company owners are even bigger idiots... she so needed to sue them... and she goes home to relax and have a little pity party only to have her evening turn even worse.  So she finally lets her Neighbor from Hell, Trevor, have it and boy does she give it to him.  The whole time I was cheering for her in my head chanting.... give it to him girl... and then he had to go and say the one thing a man should NEVER say to a woman... even if it wasn't exactly said it was still insinuated!

Trevor.... well, as gorgeous as he is I just didn't love him... not nearly as much as I thought I would or as much as I loved his cousin Jason (from Playing for Keeps)... he was just TOO full of himself.  Now don't get me wrong I love myself a cocky bastard every now and then but he was just TOO cocky.  His ideal perfect woman was just ridiculous, I mean I could see him thinking this way if he was a loser or some dorky looking guy that finally grew into his looks but he wasn't... he was hot, always has been, and has always known it.

So Trevor feels terrible for what he said to Zoe... as he should.  So he offers her a job doing some things for him like running errands and cleaning his house, and also puts in a word for her with his Uncle Jared who has a secretary position open at his construction company.  He LOVES the job that Zoe is doing for him and has even starting noticing that jr. twitches every time he gets a look at her fabulous behind.  He realizes how much he's been staring at her and how much he likes her body.... So when the opportunity presents itself  he decides to make an 'arrangement' to get her out of his system until his perfect woman comes along.

It's obvious how quickly Trevor begins to fall for Zoe even though he refuses to admit to anything other than they have fabulous sexual chemistry and it may take a while to work her out of his system.  With that said I have to admit as much as I rolled my eyes every single time Trevor mention his "perfect woman" it made his growing feelings for her that much sweeter, because... well she was NOTHING like his idea of perfection and quite honestly he really didn't want to have any feelings for her and I got a lot of that, had to do with what other people might think of who was on his arm.... sorry I have to say it... but what a dumbass!!!!

So for two months he wasted time not doing the things he secretly desired which was being able to touch Zoe when he pleased out in public... like hold her hand or even just take her out to dinner.  When he finally went to her with his idea of a new arrangement things don't quite go how he planned because she tries to end things.... but he doesn't plan to give up that easily and when he learns a few things about his "frumpy little tenant" at his families Thanksgiving dinner, he decides to go home, confront her, and get her back to Thanksgiving dinner before all the food is gone... don't forget my friends that he is a Bradford and we all know how those Bradford's are about their food ;).

But this confrontation doesn't quite go how either of them planned and after their fight Trevor finds Zoe passed out in a pool of blood on the bathroom floor when he goes after her... because he's finally admitting his deep feelings for her...even if it is just to himself.  Life is about to change for both Trevor and Zoe... even though Zoe may be freaking out about this new arrangement... Trevor is finding life is going to be extremely sweet.

was a great read for the humor alone.... Trevor was not my favorite kind of hero only because I didn't fall madly in love with him but you know what?  That's okay, sometimes it's good to not have high expectations of a hero but with that said I did still like him, it takes him a while but he does become that sweet doting man that Zoe deserves which made my heart warm to him and his crazy ideas of what perfection really is.  I recommend this book for the humor alone... books that can make me laugh like this book did will always find a place on my TBR or Recommendation lists.