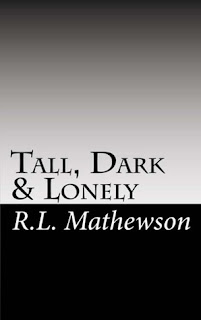 Book description...
When the mother that abandoned them years ago suddenly shows up and moves them to New Hampshire Madison has no choice but to go or lose her brother and sister. Shoving her dreams aside yet again Madison tries to make a life for her siblings only to realize that nothing is going the way it should. It's really cold, her fifteen year old sister acts like a hooker in training, men act funny around her, her boss is a real jerk, she feels like an outsider, her best friend turns out to be a mouthy sixteen year old kid and the incredibly handsome guy renting the room adjoining hers not only hogs the bathroom, taking three showers a day and leaving her with cold water, but he also has a secret. A secret that she becomes a bit obsessed with and can't let go no matter how many times she's warned off.  Detective Ephraim Williams learned long ago not to show any emotion or allow himself to get attached to humans. What was the point? They came and went and he remained. This time wouldn't be any different or so he thought. When his land lady told him her grandchildren were moving in he didn't expect much, well other than to be left alone. What he didn't expect was to have to fight bloodlust every time he so much as caught a whiff of his delectable neighbor's scent or her bombarding him with questions every time she cornered him. If that's not bad enough a Master from his past has found him once again and is demanding his blood and is willing to do anything to get it, even using the beautiful irritating neighbor that makes him feel more than pain for the first time in centuries.

I think I may have found another addiction.... R.L. Mathewson!  Her books are filled with humor and a wonderful story line that sucks you in and keeps you there until the very last word.  Watch out my friends because based on the feelings I already had for R.L.'s writing style and now the feelings for this book, I may soon be confessing my love and addiction to her books like I do with Kristen Ashley's books!

Okay so Tall, Dark, & Lonely.... was awesome!  Madison, God bless her, has been taking care of herself her entire life and has been raising her younger brother and sister because her mom is... hmm, well her mom is... worthless and a total joke as a woman.  I know it happens every day and it makes me sad for the children that suffer and extremely mad at the mother but I really want to know.... How can a mother not care for her kids?  How can a mother look at her kids as a meal ticket, or a pawn, or most especially as a burden?  I had a hard time reading about Madison's mother.... she seriously should have just been shot....LOL, oh you'll get the double meaning here if and when you've read the book.  Anyway, Madison and her family move in with their Grandmother who runs a boarding house.  She gives Madison a room away from everyone else as a way for her to finally have a little bit of a life since she's spent her entire life taking care of herself and her brother and sister.  She ends up with a room next to the very private but very delicious Ephraim.

Ephraim... mmm, yes he was something else... something I wouldn't mind.... oh never mind!  Ephraim is very private but then again he has to be after all he is a Pyte.  I don't know if I just happened to miss the explanation of what exactly a Pyte was but here is what I came up with.... A born Vampire who can not be killed, he can walk around in the sun light and if another Vampire drinks... even a taste... of his blood it will kill them.  So anyway, he lives at the boarding house and gave up the second room he rents so that Madison could have it... what he doesn't expect is his reaction to her.  Her blood is pure virgin blood but that's not all... there is something about it that calls to him, screams for him to take a taste... you know kind of like the whole Twilight... Edward/Bella thing... but this is better...

"No darling, no one else, nothing else calls me the way you do.  You're my siren calling me to shore.  My beacon.  You're the only thing I desire."


So they begin the little dance of not necessarily avoiding each other but avoiding each other... I don't know how to explain it but anyway when Ephraim hears that Madison's new... I guess boyfriend?... the guy she's seen a few times is coming to dinner he decides to join everyone for the first time in the three years he's lived there and let's just say it's a damn good thing he did too.  He not only had a bad feeling about this guy but when the truth comes out Ephraim more than puts this guy in his place... What I wouldn't have given to actually been at this dinner and watch all this happen... it was hysterical, I love to watch cocky bastards who think their shit doesn't stink get put in their place or more to the point in this situation... piss themselves... oh and then kindly tells him to take a visit to the Dr... like yesterday...LOL.

I'm not sure if it's fortunately or unfortunately Madison see's the whole confrontation and ends up finding out about Ephraim and at first freaks out.... but then she wonders why her blood isn't good enough, they end up in this little argument and she assumes either something is wrong with her or he's gay.... it was pretty amusing to watch the entire scene fold out... I mean throwing bread rolls at a vampire could be pretty dangerous but instead he finds it kind of cute... then again, I think he was already in love with her before all this happened.  Ephraim and Madison's confrontation moves from the dinning room to where she follows him up to his bedroom and they end up in each others arms with his mouth on hers.

These two seriously cracked me up... he ticked her off constantly and she'd stay mad at him... boy did she stay mad at him.  At one point I was thinking there was just something downright wrong with the girl.... but everything always ended up working itself out, or I should way it worked itself out OR someone made her realize he was just trying to help her out because he genuinely cared for her and didn't want to see her struggle.  Wait until you read about the whole sex thing... O.M.G. I couldn't decide if I wanted to laugh, cringe, or cry for her... I ended up with laughing....

by R.L. Mathewson is a fantastic read... it's got some great humor, a lovely romantic story line, a little bit of action, and a heart breaking past for both hero and heroine that will have you beaming with love at their happily ever after!  I have to say it... I wasn't going to mention it but it's true... like my gorgeous friend Gitte said...

And you know... it does.  Every vampire book I have ever read I have wondered about this and this is the first book I've come across that has actually even slightly mentioned it... So here is a big huge THANK YOU to R.L. for tackling that little... question and making it seem more like a reality.

R.L.'s books... or at least the ones I've read so far... may not consume me the same way KA's books do but they do one thing that is extremely important to me... They make me laugh, laugh out loud... like a lot and hard!  Her books are hysterical, she's got a knack for it and because of that her books will continue to be downloaded to E. Luke... there is nothing better than an author who writes a fantastic book with some great humor!!!  Okay so her books do two things... lol..... They keep me interested... I'm always wanting to know what will happen next or will there be more in this series...  Let's just say that R.L. has more than earned herself on my list of authors who get the automatic 1-click on Amazon.

Make sure you check out Tall, Dark & Lonely (Pyte Series)

.... I'm not sure how much longer it will be, but right now it's free on Amazon!!!  Get your 1-click finger ready and check it out.... you won't be disappointed!