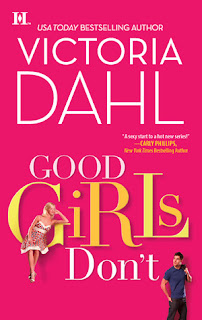 Book description...
With her long ponytail and sparkling green eyes, Tessa Donovan looks more like the girl next door than a businesswoman—or a heartbreaker. Which may explain why Detective Luke Asher barely notices her when he arrives to investigate a breakin at her family's brewery. He's got his own problems—starting with the fact that his partner, Simone, is pregnant and everyone thinks he's the father.
Tessa has her hands full, too. Her brother's playboy ways may be threatening the business, and the tension could tear her tightknit family apart. In fact, the only thing that could unite the Donovan boys is seeing a man come after their "baby" sister. Especially a man like Luke Asher. But Tessa sees past the rumors to the man beneath. He's not who people think he is—and neither is she.

So I have to admit I usually absolutely LOVE Victoria Dahl's work because they have that extra kick that will have me laughing out loud and completely drooling over the hero and loving everything about the heroine.  This book just didn't do it for me... don't get me wrong it was a wonderful book and it did have a few LOL moments and the hero was totally drool worthy because he has that whole broody cop thing going on and well... who doesn't like a man in a uniform that needs a little extra TLC?  But there was just something there that didn't pull at me like most of Victoria's books...

Tessa is sweet, she's cute, and I have to say I felt for her with the whole over protective wish they would stay out of your business older brothers.  But there was just something about her that kept me from entirely feeling the book... I can't say for sure but if I had to guess on why... it would be that she made the first moves on Luke... I don't see anything wrong with initiating but I like my heroines a little more on the timid side when it comes to sex and when I say that I mean that I like the hero to make the first move... I like to watch him chase and I love the build up of the seduction and that just didn't happen here.

Luke... well, Luke was hot but then again like I said before I like that whole man in a uniform that needs a little extra TLC but I have to say that even though he did have his reasons for not wanting anything more than a physical relationship I just didn't feel it.  Not that I didn't get it more of I just felt like it was made out to be a lot more than what it was and not to mention the rumors going around about him?  For some reason it down right pissed me off that he didn't even try to correct them, that he just let people believe what they wanted to believe when in all reality those rumors... especially the one about his ex-wife... were horrible to let people continue to believe and could quite possibly ruin a lot for him... and don't get me started on the fact that his Mom was still so close to his ex-wife.

Crap... Here I'm going on about what I didn't feel in the book and making you all think that it wasn't good when that is so far from the case.  I honestly could not put the book down... I had to know what was going to happen next... I had to make sure that Tessa and Luke would find the happiness they both deserve... and most importantly.... I HAD to see how her brothers would react to her dating Luke!

by Victoria Dahl really was a great read.  It was easy, light, had a few cute moments, and gave you that little somethin' somethin' to keep you coming back for more.  I really enjoy Victoria's writing style, one of my all time favorite LOL books with a hot as sin hero and some hot as hell erotic scenes is Talk Me Down... and maybe I was expecting something a little more along those lines with Good Girls Don't and I didn't get that with this read.... I did, however, get enough from Luke and Tessa's story to want to spend more time with the Donovan Siblings and considering that Jamie is up next... time spent with them will come sooner than later