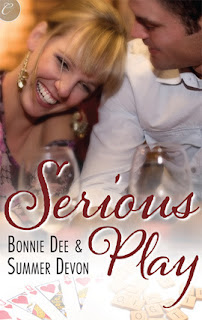 by Summer Devon and Bonnie Dee

Book description.....
Luke Bailey has dreams of building homes and putting down roots. But for a man with a rough past, finding any job isn't easy. When Mary Scott offers him a job—and a place to stay—mixing drinks and tapping beer at her theme bar, My Parents' Basement, Luke accepts. Customers flock to the cozy pub, designed to evoke memories of lost childhood, to meet and mingle and play games.
For Mary, her gorgeous new employee should be off-limits. She's his boss. And they're very different—something her interfering family constantly points out. But Mary's done playing the good girl. And Luke isn't the bad boy everyone thinks he is. Their attraction simmers until Mary seduces Luke into playing some deliciously adult games. Then a shocking betrayal threatens everything...

I was pleasantly surprised with this book.  I wasn't sure where exactly this book would take me but there's no question that my interest was sold at bad boy, and it's quite obvious I have a soft spot for bad boys.

Mary, she was just so sweet that I couldn't help but just adore her.  Granted she got on my nerves a few times but then again just about every heroine does because they don't make the decisions I would... crazy I know... but Mary really was great.  She was a fair boss who ran an amazing business.... seriously, how awesome would that bar be? I mean like amazeballs fun right?  So, Mary decides it's time to hire some more help and thanks to her friend Joann, who is a parole officer has the perfect person to help Mary out.  He's someone who deserves a shot.

I absolutely adored Luke... Of course he made bad decisions which landed him some time spent in prison but he was just so sweet.... I mean like I just want to wrap my arms around you and make your past go away because you deserve a life of happiness.   Luke had it rough, his childhood was rough and then he ended up spending 5 years in prison for a crime he willingly committed but also kind of didn't... After all the bullets were a surprise.  So, Luke starts working at Mary's bar and can't help but the constant attraction he feels for her and it's not just her outter beauty he's attracted to.  He's attracted to everything about her and cherishes her friendship.... There's something about her that brings light into his life and he sees how beautiful she is inside and out on a daily basis which makes fighting his attraction for her that much harder.

They dance around each other until finally Luke admits he wants her but won't make any moves because he likes her too much.  Mary on the other hand... she just wants one little taste of Luke or she knows she'll regret it.  One taste leads to one hot make out session that leaves them both breathless and craving more from each other.  So here is where both of them grated on my nerves... They both want each other, like seriously want each other but neither will address what happened between them, they act like it never did.  I got Luke's reasons... he thought Mary was too good for him and was also afraid that line being crossed was going to hurt his friendship with Mary and most importantly hurt his job.  I'll hand it to Mary here, she finally addressed it and yeah... she did a fabulous job... OMG totally hot, like so hot I'm getting tingles thinking about it!

So they begin this relationship that in my eyes was actually beautiful... Mary saw something special in Luke that others didn't.  She didn't let his past hold her back from thinking about a future with him... she may not have sat there and defended him with every comment thrown around but in all reality she'd be doing a lot of defending if that were the case.  So she kept her mouth shut for the most part and showed Luke how special he was to her.  Luke knew how amazing Mary was and how much he needed her to be a part of his life... he was so afraid of losing her because he thought he was no where near good enough to be in her life, like this at least, forever.  He wanted to make his life better so one day he could be worthy of a life with her... if only  he knew that he was worthy of her, that she loved the person he was and would support anything he chose to do.

An offer of a lifetime comes along and things are about to change for Luke and Mary... while I was mad at the decision Luke made I can't say that I didn't understand it, he did need to figure out what he wanted out of life and what path he wanted his life to take... but before he made this decision he did one thing that made me smile and love him even more.... he started the mending process of a bridge that was about to crumble...

was a great read.... it didn't consume me but I can't say that I was able to put it down because I wasn't.  I had to know what was going to happen between Mary and Luke next, what decision was going to made, and would they be able to overcome and work through the heartbreak that seem inevitable to both of them?  Summer and Bonnie do a fantastic job of sucking you into the story and have you anxious to find out what happens next with our beautiful couple and all the challenges they still have yet to face.  Serious Play was a fun read with a HEA that was sweet but still showed the struggles our adorable couple have yet to face but facing them will be easier because after all.... they have each other!