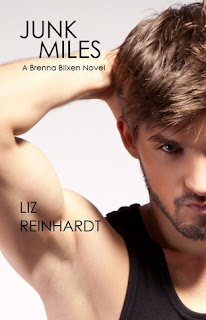 by Liz Reinhardt is an amazing sequel to Double Clutch.

Book description...
Kissing someone other than your boyfriend is cheating.
But what about thinking about kissing someone other than your boyfriend?
What about thinking about it a lot?
Brenna Blixen has the perfect boyfriend. He's sweet, sexy, loyal, and sure that Brenna is the best thing that's ever happened to him. But being the perfect girlfriend isn't as easy as Brenna thought it would be, and the pressure that comes with trying to be Jake's everything is beginning to weigh on her. When her mother surprises her with a trip to Paris over winter break, she's torn. She anticipated spending her vacation snuggling with Jake Kelly, ice-skating, drinking cocoa, and relaxing...but what girl in her right mind would turn down a trip to Paris?
Things only get more confusing when she winds up unexpectedly and unavoidably thrown into Saxon Maclean's arms in the City of Lights. Far away from the comfort and stability she finds at Jake's side, Brenna faces down the feelings that have been swirling through her since the day she laid eyes on Saxon. Is it fair for her to call herself Jake's girlfriend when she has so many unresolved feelings about someone else?
Brenna is determined to figure it all out, even if it means making some of the hardest decisions of her entire life. She also learns that every single thing she does has rippling repercussions, some that fill her with total regret. By the time she figures out what her heart truly wants, she realizes that she may not be able to have it after all.

***Warning... If you have not read Double Clutch

do not continue to read this review unless you want spoilers. ***

O.M.G..... Can this series get any better?  I was so far sucked into Brenna's story and the love between her two boys in Double Clutch that I couldn't wait to get Junk Miles on to E.Luke so I could find out what would happen to these amazing characters next.  What happens?  Well I'll tell you one thing... I wasn't entirely happy with any of them... meaning they all made me mad at one point or another, well not really Saxon because who can get mad at him...you know what I mean.  Even though they made me mad I still have to say that I absolutely LOVED the way Liz wrote this book... these are teenagers and teenagers always make huge mistakes but in this book these teenagers were still responsible... to an extent.


So Brenna takes a wanted but yet unwanted trip to Paris with her Mom over Christmas Break and who happens to also be traveling with his mom?  Oh My... it's Saxon and his gorgeous bad boy self!  And this is what turns up the drama... things get complicated... hearts are broken... hurtful things are done... and most of all.... true feelings are revealed.


Things are going absolutely wonderful for Brenna and Jake, their love for each other is strong, beautiful, and they adore spending as much time together as they can.... Well that is until Paris, where Saxon continues to make his feelings for Brenna known.  She's still so confused over her feelings for him, she knows that she loves Jake but there is something about Saxon that is pulling her to him... So.... she kisses him.  Yep, she hauls off and kisses him.  Now normally I am totally against any kind of cheating... and yes that includes in books... BUT I did not stay mad at Brenna for long and here's why...  She didn't even wait a full day before she called and confessed what happened with Saxon to Jake... She took FULL responsibility and told him what happened and why.... Jake even gave her an out and tried to play it off as Saxon not leaving her alone but she didn't take it... and that, My friends, is where my respect for this beautiful girl grew...


Jake is obviously heartbroken and ends things with Brenna....   Now here is where I can't decide if I was mad at her or if I was happy she didn't wallow.... That same night she goes out and thus begins a semi-kind of- whatever you want to call it relationship with Saxon... Mmmm, that boy is so hot and knows just what to say and do... and he does a damn fine job of keeping Brenna's mind off of what is going on back home with Jake... up until she checks the photo album dedicated to her on Jake's Facebook page where she learns that things really are over between them.  I can't decide if this upsets me or makes me happy... I want her upset over Jake but at the same time I want her to take this opportunity to figure out what the hell her feelings for Saxon are all about.  She cares deeply for him and those feelings are leaving her confused... and I honestly couldn't decide if I was happy or mad over that... How about we'll go with I was a little of both.


Once they get back home is when the real heart break begins.... I was about in tears because I could feel Brenna's pain from losing Jake and seeing him with someone else.  But she needed that... she needed to see that your actions have consequences and even though she is still madly in love with him, she lost the right to claim him as her boyfriend, she lost the right to hold his hand in the hallway, and now she's getting that loss rubbed in her face in a big, hurtful way... and that is where Jake made me mad.  But again, I couldn't stay mad for long because... let's face it... I would have done the same thing... Hell, I did do the same thing in High School... but I thought he was better than that.  Don't get me wrong, he really is wonderful, I love Jake... I mean, I absolutely adore him.... and I think throwing that in Brenna's face ended up working out for the best.. but it still irritated me that he went to the extent that he did, then again boys will be boys... right?  He had his reasons, which he explains.... and she needed the reality check which I think worked a little more than any of them anticipated!


Saxon, God love him... knows he's never going to have Brenna's heart the way Jake does and tells her he will fix things.... it takes a while for him to try and make good on that promise and when he does... questions get answered... things get resolved, well sort of... because the hurt Jake and Brenna put each other through obviously will take time to heal... but I have to hand it to Saxon... clearly he loves Brenna but he knows that her heart belongs to Jake, he knows that she's better off with Jake, and most of all he struggles with the fact that he yet again hurt his brother (who he thinks still doesn't know that they are brothers).  He knows he needs Brenna in his life for whatever reason.. mostly because she sees him and doesn't put up with his shit... but because he doesn't want to lose her entirely he tries to figure the best way possible to fix things between her and Jake... and I personally think that him helping heal that wound is what helped Jake's calm reaction to Brenna's phone call the night of prom for him to come pick her and a very drunk Saxon up... I'm hoping that him helping that wound and Jake's reaction is the start of healing a friendship that never should have ended in the first place.  I guess we'll see!!

by Liz Reinhardt pulled at my heart... the love triangle is still there and it's still a struggle to chose who you think Brenna should be with when you know deep down who she's really meant for... but you can't help but feel for each these three.. you can't help but want to comfort Jake when his heart is broken, or even Brenna when she has to face the reality of her mistakes, or most of all Saxon when he realizes he will always come second.  Liz has an amazing talent that pulls you in so deep that you can't help but crave more of her work... I'm extremely anxious to begin Slow Twitch (The 3rd Brenna Blixen Novel) but I had to get my feelings out for Junk Miles first.  I loved this book... even with all the heart break... I loved it because the heartbreak just made the bond between Jake and Brenna stronger... it showed every one that those two are meant for each other but yet Saxon is meant to be a part of their lives as well... they just have to figure out what that part is.


Definitely check out this book!!!  Liz has a way of satisfying the craving for a good book!