In Dreams (The Dream Series #1) Review 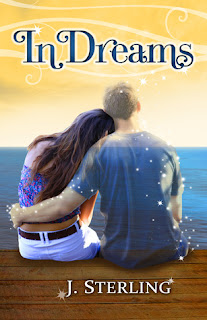 In Dreams (The Dream Series #1)

by J. Sterling is a special kind of book... it's emotional, filled with love and friendships, and best of all has got some of THE best LOL moments!

Book description...
When Katherine Johns starts dreaming about a boy she doesn't know, her college roommate Taylor is determined to find him. Convinced he must exist, Taylor is relentless... until she finds out exactly WHO the mysterious stranger really is.
The realization rocks the girls to their core and sends them down a path of unimaginable heartbreak as they learn to navigate their new reality.
Follow Katherine & Taylor's journey through love, friendship and tragedy in the first book of this emotionally captivating series.

So first off I just want to get out there that  J. Sterling is one of the most amazeballs Authorballs ever... YES!  I said Authorballs and no I'm not going to share the story behind that... at least not yet... because the other most amazeballs Authorballs out there is this Authorballs Author-Soul-Mate... That's right and since I've already declared my love for Colleen Hoover and all her fantastic characters I now have to declare that I adore J. Sterling just as much... but a lot of my love for her is simply because I have discovered that she is my TV soul mate... LOL, I had to sneak that one in there J

So you're probably wondering why in the world I'm going on and on about soul mates?  Well that's what this amazing story all stems from... soul connections.  Spending past lives with people.  Have you ever wondered if your significant other is your soul mate?  Or if your best friend was a friend in a past life?  Or my most recent inquiry is if my book girls and I were all somehow separated at birth....  Yeah, me too... and for those of you who think I'm crazy... it's all good there's a nice long line of others you can join... Anyway... I LOVE to believe in this kind of stuff, I think it's tons of fun to have my cards or my palm read and have been told on numerous occasions that my dear sweet husband is my soul mate... Therefore, I understood this book and the connections that were there.  They felt real to me and I loved that J. took a chance and shared her story with us because to me it was believable.  Now before I start telling you what I loved about these characters and giving you my awesome opinions on what I think they should have done I just want to take a minute of silence to appreciate J's freaking fantastic sarcastic humor... You all know how I feel about sarcasm.. and In Dreams had so much sarcasm in it that I felt like these people were my friends..... I saw someone in each character that I honestly could not help but LOVE them all... well except for one but we'll get to her later.

So it all starts off with Katherine having a dream about a boy.  A boy she doesn't know but feels this strange but extremely strong connection with... SO strong that when she wakes up she feels the physical pain from losing him.  Her roommate and new best friend, Taylor, decides to encourage her to keep an open mind about this boy and see if she happens to run into him somewhere.  Gotta say... I absolutely loved Katherine and Taylor.  Katherine was so sweet and so in love that I could actually feel the struggle she was having when it came to the very big decisions she had to make.  Taylor... OMG can I say if she was real I would want her as my BFF... there were moments where I could actually see myself in her... like the fact that she always has something to say and what she says is almost always some sort of hilarious comeback that had me cracking up....

"Fine, fine.  Yes, you have to give Cooper a chance.  Your country would want this.  If you don't date Cooper, the terrorists win.  Happy?"

I have all kinds of Taylor quotes highlighted in E. Luke.... mostly because I told J that I would highlight all the amazeballs stuff in her book and also because I'm a sucker for a good laugh and J totally gave me some awesome laughs in this book almost all through adorable little Taylor!

Then you have Cooper... Cooper is HOT, like so hot that Jenny and I have inducted him into the Hotties and ♥'s club... and we do not just induct anyone... just sayin'.  So Cooper totally has it bad for Katherine but he's not all up in your face and pushy about it... he knows there is something special about her, something he can't explain but just being around her makes him feel better... he wants to get to know her, he wants to spend time with her.  When Katherine finally decides to give Cooper a chance I swear I giggled like a little school girl and thought... It's about time girl.. this boy is hot, sweet, and most of all he's.... oopsie... sorry about that, I almost gave away something important.

Unfortunately for Cooper, Kat is still pretty stuck on dream boy.  Granted she gets all sweaty and nervous around Cooper and she knows she's totally into him... But... her feelings for Dream Boy are stronger, she can't explain it but she can't seem to get over it either.  Cooper knows that she's not quite entirely there with him emotionally but like I said before there is something about her that he just can't let go of and knows that he'll wait for her.. no matter what it takes.  Things seem to be going good for them though.. well that is until Kat goes home for Thanksgiving with Taylor......

I'm not going to talk about anything else in this book because everything from Thanksgiving weekend on will just ruin it for you.... Yes, I am a total hypocrite because I do beg my girls for spoilers... Mostly Jenny... and they hardly ever give me any even though I'm totally giving them the whiny voice and stick out my lower lip in an adorable little pout... but I'm not going to give any away because it will take away from the book, you have to feel the emotions of these characters before you learn anything else and believe me when I say.... that you will appreciate that I didn't give anything away.

Okay so let me tell you about the one character that I did not like and I have to snort at myself considering I actually do have a friend just like her and I've been friends with her since we were little but anyway.. Kylie, she is so far stuck up her own booty that she can't seem to see reason.  She's competitive.. which don't get me wrong so am I but... she's competitive in all the wrong areas.  She gets mad and jealous over the smallest things like a boy that is paying attention to another friend instead of her... Come on honey, time to grow up.. and when I say that... I'm also directing that statement to a certain someone who I have said this to on numerous occasions, even though she never listens to me and laughs because she thinks it's actually fun to be "That girl" that everyone is friends with but really kind of doesn't like for whatever reason.  HA!  I say that and now I have to ask a certain someone.... You know who you are miss MW... Why are we friends again?  Oh yeah, I remember.. I love to listen to your drama filled stories... it's totally like getting to see a real live TV show in person... LOL..

by J. Sterling is a great book filled with humor, love, amazing friendships, and connections that last an eternity.  J has got a talent that I am ready to see more of.  She's got another book that will be released on Thursday 4/19/12 called Chance Encounters

which going by the description looks like it's going to be a GREAT book as well.  Take a chance on this debut novel of an Author who has taken a chance and shared her talent with us....