The Look of Love (The Sullivans Book 1) Review 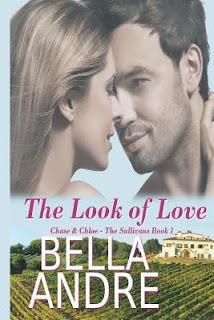 The Look of Love: The Sullivans, Book 1 (Contemporary Romance)

Book description...
Chloe Peterson is having a bad night. A really bad night. The large bruise on her cheek can attest to that. And when her car skids off the side of a wet country road straight into a ditch, she’s convinced even the gorgeous guy who rescues her in the middle of the rain storm must be too good to be true. Or is he?
As a successful photographer who frequently travels around the world, Chase Sullivan has his pick of beautiful women, and whenever he’s home in San Francisco, one of his seven siblings is usually up for causing a little fun trouble. Chase thinks his life is great just as it is—until the night he finds Chloe and her totaled car on the side of the road in Napa Valley. Not only has he never met anyone so lovely, both inside and out, but he quickly realizes she has much bigger problems than her damaged car. Soon, he is willing to move mountains to love—and protect—her, but will she let him?
Chloe vows never to make the mistake of trusting a man again. Only, with every loving look Chase gives her—and every sinfully sweet caress—as the attraction between them sparks and sizzles, she can’t help but wonder if she’s met the only exception. And although Chase didn’t realize his life was going to change forever in an instant, amazingly, he isn’t the least bit interested in fighting that change. Instead, he’s gearing up for a different fight altogether…for Chloe’s heart.

Clearly I have a thing for bad boys and Bella Andre knows how to deliver a bad boy... when I say bad boy maybe I should be a bit more specific because this can be taken so many different ways, my idea for a hot bad boy is mostly...well... a dog.. to say it out loud it does not sound hot.. at all and the fact that they fly through women like water is not a turn on... what is a turn on about them you ask?  It's that, they prefer the bachelorhood, don't want to find that special girl because they're happy having a new one warm their bed at night.. so when that special girl comes along they get totally blindsided because they find themselves head over heals in love while thinking it would never happen to them.  It's getting to live vicariously through the heroine to be THAT girl that changes a bad boys ways.   It's that falling in love for the first time feeling, something you only live once but is so beautiful you wish you could watch it happen over and over again... THAT is why a bad boy hero is something I absolutely love to read about.

Oh, how I adored Chloe.... the poor woman was having one heck of a rough time when it came to her ex-husband and even though she faced years of him verbally abusing her she was still a sweetheart with an amazing sense of humor... well once she forgot to be afraid.or wary.  On the run from her ex Chloe finds herself in a ditch in the middle of a storm with a massive bruise from the ex's fist.  She's hesitant to accept the help from the extremely sexy Chase Sullivan.

Mmm... Chase....sigh.... he was absolutely amazing... I mean like I fell in love with him because he was just so sweet, caring, and wanted to help Chloe.  He knew right off the bat there was more to just wanting her in his bed and he made sure to slowly ease into getting her to agree to stay with him at his brother, Marcus', winery for a few days.  Chase finally gets a chance to make his move and once Chloe and him settle into a physical relationship it doesn't take long for Chase to realize his feelings for Chloe are more than just about sex and that he will never be able to get enough of her.

"I know you're not ready and I know I shouldn't push you, but damn it, I can't help the way I feel.  I can't stop myself from loving you."

While I adored Chloe and I completely understood her reluctance it doesn't change the fact that I still got a tad annoyed that she fought her feelings for Chase and was so determined to leave.  He more than proved that he loved her even after he repeatedly told her and she hadn't said anything back... He took care of her and treated her like she was the most precious thing in the world.... And most importantly he showed her that her sexual cravings were normal and he wanted to explore them with her.  Only after the danger her ex-husband brings is taken care of does Chloe finally admit her feelings for Chase and that her life would be so much better with him in it.

The Look of Love: The Sullivans, Book 1 (Contemporary Romance)

by Bella Andre was a great but short read.  I do prefer my books a little longer... however Chase has 5 brothers... yep that's right my friends there are still 5 more Sullivan bad boys to lust after!!!  I can always count on Bella to deliver a sweet love story with a heroine that anyone can love and a hero that will knock your socks off because he's finally realized what love is really all about.  The Look of Love is a sweet, beautiful story that will stay on my re-read list for one of my many bad boy cravings