Back to You Review & Blog Tour 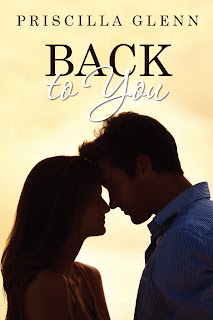 Back to You by Priscilla Glenn

Book description…
When Lauren Monroe first laid eyes on Michael Delaney back in high school, she had every reason to stay away from him; within minutes of their first encounter, his volatile actions confirmed his notorious reputation. But Lauren saw something in him that caused her to question his bad-boy persona, and against her better judgment, she took a chance. She had no way of knowing that the unlikely friendship they formed would become so important to her.
Or that it would end so painfully.
Eight years later, when Lauren begins her new job at Learn and Grow Day Care, Michael is the last person she expects to see. Refusing to revisit the hurt and confusion of their past, Lauren vows to keep her distance from him. But staying away from Michael proves to be more difficult than she thought, despite her lingering grief and her instincts for self-preservation.
As Lauren and Michael recall the friendship that changed them forever and the events that tore them apart, will they finally be able to heal? Or will the ghosts of Michael’s past prove to be too much to overcome?

Back to you is one of those stories that touches your heart because of what the characters have to go through before finally realizing exactly what they were to each other.  The heartbreak, the bad decisions, the what if’s, the reconnecting, and the realization of how much they are meant to be together.

I love how Priscilla takes us on this back and forth journey through Lauren and Michael’s lives.  Granted most of it is through Lauren’s POV, we do get glimpses into Michael’s and it just gives the story that much more to solidify the fact that there is absolutely no doubt that these two are more than meant to be with each other.  Sometimes I find it difficult to read the present and past chapters but in this case it was entirely different… it was easy and it actually came across as more of memories than anything… at least to me.

There is something special about best friends who fall in love.  They know each other on a different level than those who jump into an actual relationship because they take the time to get to know one another without any stress over a first kiss or anything physical for that matter.  So in all reality it makes their relationship that more special when they do finally become physical and that was no question between Lauren and Michael.

I felt for Lauren numerous times but there were also times when I wanted to smack her and tell her to finally get what she’s kept inside herself out in the open and put Michael in his place… tell him how she felt and how much he actually hurt her.  So when she finally did I was proud of her.  She needed to get that out and he needed to hear how much it really hurt because in hearing that he was able to see just how deep her love for him ran.

I also felt for Michael.  The poor guy did not have an easy life and was given the short end of the stick in every way possible.  If it weren’t for one mistake I honestly do not think he ever would have come back into Lauren’s life because he truly believed that she deserved better than him.  I know that happens frequently but I think it’s a load of crap because no person is better than another… Sometimes I think it’s better when two people who are from two different worlds get together and I say that from experience.  You can’t help who you fall in love with and sometimes falling in love with someone who didn’t get the same opportunities you may have gotten, makes you appreciate everything that much more.

Back to You is a sweet story about how true love will always overcome any obstacle thrown in its path and it is one that should go on your must read list!

Make sure you enter the rafflecopter below for your chance to win a signed copy of Back To You!!!

a Rafflecopter giveaway
Posted by Lori at 3:30 AM