No Turning Back (The Kathleen Turner Series #1) Review 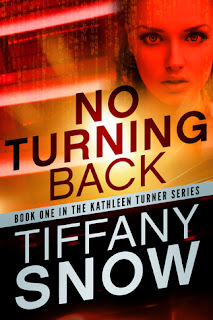 No Turning Back by Tiffany Snow

Book description…
Kathleen Turner has goals. She moved to Indianapolis to start seeing to them, but things aren’t going quite as well as she’d hoped. She’s a runner for a high-powered law firm in town, not the most prestigious of positions, but it and her part-time bartender gig at least pays the bills. And one of the senior partners is a dreamboat in that obscenely rich, disturbingly good looking, slightly snobbish sort of way.
She was quite happy ogling him from afar, before she did a mortifying face plant in his lap during a meeting. After that…well…she was more about the avoiding. Mature, no. More likely to assure she keeps her job, yes.
She’s made some friends in the few months she’s been in Indy. One of those friends is her neighbor Sheila, though Kathleen can’t say she’s completely comfortable with Sheila’s job choice as a high-dollar escort.
It’s the middle of the night when Kathleen hears fighting coming from Sheila’s apartment. As disturbing as that is, it’s the ominous sound of silence afterwards that keeps Kathleen from falling back to sleep. Slipping from bed with the intention of making sure everything is okay, Kathleen knocks on her friend’s door, only to find Sheila murdered, her naked body sprawled on sheets stained crimson with her blood.
Shock and horror are followed by gritty determination when it becomes clear that Sheila’s death isn’t random and it isn’t the result of a jealous boyfriend. It’s the opening gambit in a web of murder, deceit, conspiracy, and fraud that stretches to the law firm for which Kathleen works. Maybe to the very office that Blane Kirk commands.
And Kathleen Turner, law office runner, can trust no one if she wants to survive.

So I have to admit that I am ashamed that I just found this series… and I shouldn’t even say that I just found it because in all reality I’ve had quite a few people recommend The Kathleen Turner Series to me quite a few times and I haven’t gotten around to reading them.  But I finally did and Oh. My. God. I freaking LOVED this book.  It was like Stephanie Plum meets Indy Savage!  It was action packed, funny, drama filled, and hot in all the right places!  I seriously cannot wait to dive into book 2 – Turn to Me.

Kathleen is so my kinda girl!  She’s got a back bone and pushes through her fears to make sure she does the right thing… even if it’s not always the right thing.  She’s caring and compassionate.  She seems to attract bad luck and her curiosity is through the roof.  Quite frankly her curiosity and determination is so high I’m a little surprised she actually managed to survive the first book… or maybe I should say I’m surprised she survived the first book without at least ending up sedated and hospitalized!  But I guess that’s where her two very hot protectors come in!

Blane has just the right amount of mysterious bad boy and sex appeal to make you want to keep coming back for more.  He’s kind of closed off about his feelings and in all reality he’s confusing as hell… but there is no doubt that he has some special feelings for Kathleen and will do whatever necessary to keep her safe, even if it means lying to her.

The thing that I absolutely LOVED about this book was that once Kathleen got Blane’s full attention she didn’t turn into some helpless little doll who let her man (even if he wasn’t really her man) take care of everything.  She stuck to her guns and made sure to “finish” what she started… even if she got played a few times in the process, by a few different people.  I also loved how Kathleen was confident enough in herself to know that she looked good and would even go as far as to compliment herself, even if was inner dialogue… but yet she was still a little self conscious as well.  She didn’t think she was good enough for Blane, not because he was so gorgeous and she didn’t think she was, but because they came from two totally different “financial worlds” and she didn’t feel as though they could ever mix because of that alone.  So many books have that cliché where the hero is the most handsome man the heroine has ever seen and she is nothing but a plain jane… and even though Kathleen did refer to herself as a plain jane at times, she still knew she was a beauty – which to me, made her that much more appealing!

No Turning Back is a book I am definitely recommending as a MUST read for 2013… Even though I haven’t read book 2 (which I plan to start here in about… oh 20 minutes or so) I will go as far as to say The Kathleen Turner Series is definitely on my TBR for the year!  Book 3 (Turning Point) is scheduled to release February 19, 2013 so mark your calendars and add it to your Goodreads To-Read shelf!